In this Chinese name, the family name is Xin.

Xin Zhui [ɕín ʈʂwéi] (Chinese: 辛追; died 168 BC), also known as Lady Dai or Marquise of Dai, was married to Li Cang (利蒼), the Marquis of Dai and Chancellor of Changsha Kingdom, during the Western Han dynasty of ancient China. She is notable for her tomb and exceptionally well preserved remains discovered in 1968, alongside hundreds of valuable artifacts and documents, inside a hill known as Mawangdui, in Changsha, Hunan, China. Her body and belongings are currently under the care of the Hunan Museum, which has allowed occasional international exhibits.[1][2]

Xin Zhui lived an extravagant lifestyle for her time. She enjoyed having her own musicians for entertainment, whom she would have play for parties as well as her own personal amusement.[3] She may have enjoyed playing music as well, particularly the qin, which was traditionally associated with refinement and intellect.[2][Note 1] As a noble, Xin Zhui also had access to a variety of imperial foods, including various types of meat, which were reserved for the royal family and members of the ruling class.[4] Most of her clothing was made of silk and other valuable textiles, and she owned a variety of cosmetics.[2][3]

As she aged, Xin Zhui suffered from a number of ailments that would eventually lead to her death. Along with a number of internal parasites, she also had coronary thrombosis and arteriosclerosis, most likely linked to excessive weight gained due to a sedentary lifestyle. A fused spinal disc probably caused her immense pain, which contributed to a decrease in physical activity. She also suffered from gallstones, one of which lodged in her bile duct and further deteriorated her condition.[5]

Xin Zhui died around 50 years of age in 168 BC.[3][7] She was buried in an immense tomb at Mawangdui in Changsha, with more than 1,000 items ranging from drink and food vessels, to silk clothing and tapestries, to figurines of musicians and mourners.[3] 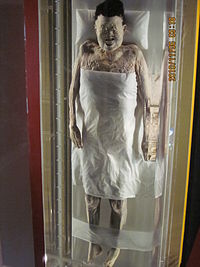 The preserved body of Xin Zhui.

Diagram of tomb no. 1, where Xin Zhui's body was found

In 1968, workers digging an air raid shelter for a hospital near Changsha unearthed the tomb of Xin Zhui, as well as the tombs of her husband and a young man who is most commonly thought to be her son.[3] With the assistance of over 1,500 local high school students, archaeologists began a large excavation of the site beginning in January 1972. Xin Zhui's body was found within four rectangular pine constructs that sat inside one another which were buried beneath layers of charcoal and white clay. The corpse was wrapped in twenty layers of clothing bound with silk ribbons.[5][8]

In the tomb of Xin Zhui, four coffins of decreasing sizes enclosed one another. The first and outermost coffin is painted black, the color of death and the underworld. All painted images sealed inside this coffin were thus designed not for an outside viewer but for the deceased and concern the themes of death and rebirth, protection in the afterlife, and immortality. The second coffin has a black background but is painted with a pattern of stylized clouds and with protective deities and auspicious animals roaming an empty universe. A tiny figure, the deceased woman, is emerging at the bottom center of the head end. Only her upper body is shown, for she is about to enter this mysterious world. The third coffin exhibits a different color scheme and iconography. It is shining red, the color of immortality, and the decorative motifs include divine animals and a winged immortal flanking three-peaked Mount Kunlun, which is a prime symbol of eternal happiness. Inside this tomb on top of the fourth and innermost coffin the excavators found a painted silk banner about two meters long.

Yellow and black feathers are stuck on the cover board of the coffin. People at that time believed that in order to fly up to the heavens and become immortal, one needs to go through a "featherization" phase, which is growing feathers on the body. Many texts[which?] during and before that time mentioned the connection between growing feathers and becoming a celestial being. A celestial being is even referred to as a "feathered person" in some texts. One celestial being on Nanyang Han stone portraits also has feathers all over the body. The feathers stuck to the coffin was expressing the hopes that Xin Zhui would grow feathers on the body and enter the heavens to become immortal.[9]

Xin Zhui's body was remarkably well preserved in an unknown fluid inside the coffin. Her skin was soft and moist, with muscles that still allowed for her arms and legs to flex at the joints. All her organs and blood vessels were also intact, with small amounts of Type A blood being found in her veins. There was hair on her head, with a wig pinned with a hair clasp on the back of her head. There was skin on her face, and her eyelashes and nose hair still exist. The tympanic membrane of her left ear was intact, and her finger and toe prints were distinct.[6] This preservation allowed doctors at Hunan Provincial Medical Institute to perform an autopsy on 14 December 1972.[8] Much of what is known about Xin Zhui's lifestyle was derived from this and other examinations.[5] Xin Zhui's body was soaked in an unknown liquid that was mildly acidic.[10][citation needed] More than 1,000 precious artifacts were found with Xin Zhui's body.

In Western Han Dynasty, elaborate and lavish burials were common practice. One reason was the notion of imperishability of the soul: it was believed that another world existed for the dead, and they needed food and accommodation just like the living. Therefore, the consecration for the dead should be the same as what was provided for the living, and all the necessities in life should be brought into the grave for use in the afterlife. The other was the emphasis on filial piety during that time. In Han Dynasty, filial piety had become an important approach to become an official, and elaborate and lavish burials are a significant way to show filial piety to one's deceased parents. These were among the main reasons why there were so many precious artifacts in Xin Zhui's tomb.[9]

Xin Zhui's body and tomb are considered one of the most important archaeological discoveries of the 20th century.[2] Besides having some of the best preserved human remains ever discovered in China, the contents of Xin Zhui's tomb revealed much information about life in the Han dynasty that was previously unknown. The discovery continues to advance the fields of archaeology and science in the 21st century, particularly in the area of preservation of ancient human remains. Scientists in 2003 developed a "secret compound" that was injected into Xin Zhui's still existing blood vessels to assure her preservation.[8] Research at the Hunan Museum continues in an effort to perfect corpse preservation, using Xin Zhui as the main candidate for such procedures.[11]

1.Note 1 Although traditional literature associates the playing of the qin as being a masculine activity, contemporary paintings and other artifacts strongly suggest that women enjoyed playing the instrument as well.[12]