Since prehistory, the winter solstice has been seen as a significant time of year in many cultures, and has been marked by festivals and rituals.[4] It marked the symbolic death and rebirth of the Sun.[5][6][7] The seasonal significance of the winter solstice is in the reversal of the gradual lengthening of nights and shortening of days.

Japanese Sun goddess Amaterasu emerging from a cave (by Kunisada) 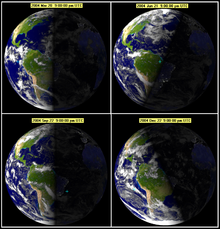 The solstice may have been a special moment of the annual cycle for some cultures even during Neolithic times. Astronomical events were often used to guide activities, such as the mating of animals, the sowing of crops and the monitoring of winter reserves of food. Many cultural mythologies and traditions are derived from this.

This is attested by physical remains in the layouts of late Neolithic and Bronze Age archaeological sites, such as Stonehenge in England and Newgrange in Ireland. The primary axes of both of these monuments seem to have been carefully aligned on a sight-line pointing to the winter solstice sunrise (Newgrange) and the winter solstice sunset (Stonehenge). It is significant that at Stonehenge the Great Trilithon was oriented outwards from the middle of the monument, i.e. its smooth flat face was turned towards the midwinter Sun.[8]

The winter solstice was immensely important because the people were economically dependent on monitoring the progress of the seasons. Starvation was common during the first months of the winter, January to April (northern hemisphere) or July to October (southern hemisphere), also known as "the famine months". In temperate climates, the midwinter festival was the last feast celebration, before deep winter began. Most cattle were slaughtered so they would not have to be fed during the winter, so it was almost the only time of year when a plentiful supply of fresh meat was available.[9] The majority of wine and beer made during the year was finally fermented and ready for drinking at this time. The concentration of the observances were not always on the day commencing at midnight or at dawn, but at the beginning of the pagan day, which in many cultures fell on the previous eve.[citation needed]

Because the event was seen as the reversal of the Sun's ebbing presence in the sky, concepts of the birth or rebirth of sun gods have been common.[citation needed] In cultures which used cyclic calendars based on the winter solstice, the "year as reborn" was celebrated with reference to life-death-rebirth deities or "new beginnings" such as Hogmanay's redding, a New Year cleaning tradition.[citation needed] Also "reversal" is yet another frequent theme, as in Saturnalia's slave and master reversals.

Makara Sankranti, also known as Makaraa Sankrānti (Sanskrit: मकर संक्रांति) or Maghi, is a festival day in the Hindu calendar, in reference to deity Surya (sun). It is observed each year in January.[10] It marks the first day of Sun's transit into Makara (Capricorn), marking the end of the month with the winter solstice and the start of longer days.[10][11] In India, this occasion, known as Ayan Parivartan (Sanskrit: अयन परिवर्तन), is celebrated by religious Hindus as a holy day, with Hindus performing customs such as bathing in holy rivers, giving alms and donations, praying to deities and doing other holy deeds.

Iranian people celebrate the night of the Northern Hemisphere's winter solstice as, "Yalda night", which is known to be the "longest and darkest night of the year". Yalda night celebration, or as some call it "Shabe Chelleh" ("the 40th night"), is one of the oldest Iranian traditions that has been present in Persian culture from ancient times. In this night all the family gather together, usually at the house of the eldest, and celebrate it by eating, drinking and reciting poetry (esp. Hafez). Nuts, pomegranates and watermelons are particularly served during this festival.

An Aggadic legend found in tractate Avodah Zarah 8a puts forth the talmudic hypothesis that Adam first established the tradition of fasting before the winter solstice, and rejoicing afterward, which festival later developed into the Roman Saturnalia and Kalendae.

The pagan Scandinavian and Germanic people of northern Europe celebrated a winter holiday called Yule (also called Jul, Julblot, jólablót). The Heimskringla, written in the 13th century by the Icelander Snorri Sturluson, describes a Yule feast hosted by the Norwegian king Haakon the Good (c. 920–961). According to Snorri, the Christian Haakon had moved Yule from "midwinter" and aligned it with the Christian Christmas celebration. Historically, this has made some scholars believe that Yule originally was a sun festival on the winter solstice. Modern scholars generally do not believe this, as midwinter in medieval Iceland was a date about four weeks after the solstice.[12]

Sol Invictus ("The Unconquered Sun/Invincible Sun") was originally a Syrian god who was later adopted as the chief god of the Roman Empire under Emperor Aurelian.[13] His holiday is traditionally celebrated on December 25, as are several gods associated with the winter solstice in many pagan traditions.[14] It has been speculated to be the reason behind Christmas' proximity to the solstice.[15]

In East Asia, the winter solstice has been celebrated as one of the Twenty-four Solar Terms, called Dongzhi in Chinese. In Japan, in order not to catch cold in the winter, there is a custom to soak oneself in a yuzu hot bath (Japanese: 柚子湯 = Yuzuyu).[16]

Although the instant of the solstice can be calculated,[17] direct observation of the solstice by amateurs is impossible because the Sun moves too slowly or appears to stand still (the meaning of "solstice"). However, by use of astronomical data tracking, the precise timing of its occurrence is now public knowledge. One cannot directly detect the precise instant of the solstice (by definition, one cannot observe that an object has stopped moving until one later observes that it has not moved further from the preceding spot, or that it has moved in the opposite direction). Furthermore, to be precise to a single day, one must be able to observe a change in azimuth or elevation less than or equal to about 1/60 of the angular diameter of the Sun. Observing that it occurred within a two-day period is easier, requiring an observation precision of only about 1/16 of the angular diameter of the Sun. Thus, many observations are of the day of the solstice rather than the instant. This is often done by observing sunrise and sunset or using an astronomically aligned instrument that allows a ray of light to be cast on a certain point around that time. The earliest sunset and latest sunrise dates differ from winter solstice, however, and these depend on latitude, due to the variation in the solar day throughout the year caused by the Earth's elliptical orbit (see earliest and latest sunrise and sunset).

Holidays celebrated on the winter solstice

Length of the day near the northern winter solstice

The data is arranged geographically and within the tables from the shortest day to the longest one.