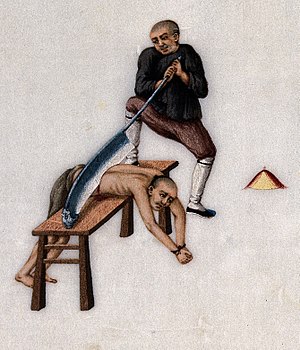 A prisoner is executed on a wooden bench with a large blade.

Waist chop or waist cutting (simplified Chinese: 腰斩; traditional Chinese: 腰斬; pinyin: Yāo zhǎn), also known as cutting in two at the waist,[1] was a form of execution used in ancient China.[2] As its name implies, it involved the condemned being sliced in two at the waist by an executioner.

Waist chopping first appeared during the Zhou dynasty (c. 1046 BC – 256 BC). There were three forms of execution used in the Zhou dynasty: chēliè (車裂; quartering the prisoner alive), zhǎn (斬; waist chop), and shā (殺; beheading).[3] Sometimes the chopping was not limited to one slice.

Gao Qi, a Ming dynasty poet, was sentenced by the Hongwu Emperor to be sliced into eight parts for his politically satirical writing.[4]

An episode not attested in the official histories recounts that in 1734, Yu Hongtu (俞鴻圖), the Education Administrator of Henan, was sentenced to a waist chop. After being cut in two at the waist, he remained alive long enough to write the Chinese character cǎn (慘; "miserable, awful") seven times with his own blood before dying. After hearing this, the Yongzheng Emperor abolished this form of execution.[5]

In the modern Chinese language, "waist chop" has evolved to become a metaphor for the cancellation of an ongoing project, especially cancellation of television programs.