The historical trends in voter turnout in the United States presidential elections have been determined by the gradual expansion of voting rights from the initial restriction to white male property owners aged 21 or older in the early years of the country's independence, to all citizens aged 18 or older in the mid-20th century. Voter turnout in United States presidential elections has historically been higher than the turnout for midterm elections.[1]

239 million people were eligible to vote in the 2020 presidential election and roughly 66.1% of them submitted ballots, totaling about 158 million. Biden received about 81 million votes, Trump about 74 million votes, and other candidates (including Jo Jorgensen and Howie Hawkins) about 3 million votes.

The gradual expansion of the right to vote from only property-owning men to include all white men over 21 was an important movement in the period from 1800 to 1830.[2] Older states with property restrictions dropped them, namely all but Rhode Island, Virginia and North Carolina by the mid-1820s. No new states had property qualifications, although three had adopted tax-paying qualifications – Ohio, Louisiana and Mississippi, of which only in Louisiana were these significant and long-lasting.[3] The process was peaceful and widely supported, except in Rhode Island. In Rhode Island, the Dorr Rebellion of the 1840s demonstrated that the demand for equal suffrage was broad and strong, although the subsequent reform included a significant property requirement for any resident born outside of the United States. However, free black men lost voting rights in several states during this period.[4]

The fact that a man was now legally allowed to vote did not necessarily mean he routinely voted. He had to be pulled to the polls, which became the most important role of the local parties. These parties systematically sought out potential voters and brought them to the polls. Voter turnout soared during the 1830s, reaching about 80% of the adult male population in the 1840 presidential election.[5] Tax-paying qualifications remained in only five states by 1860 – Massachusetts, Rhode Island, Pennsylvania, Delaware and North Carolina.[6]

Another innovative strategy for increasing voter participation and input followed. Prior to the presidential election of 1832, the Anti-Masonic Party conducted the nation's first presidential nominating convention. Held in Baltimore, Maryland, September 26–28, 1831, it transformed the process by which political parties select their presidential and vice-presidential candidates.[7]

The passage of the Fifteenth Amendment to the United States Constitution in 1870 gave African American men the right to vote. While this historic expansion of rights resulted in significant increases in the eligible voting population and may have contributed to the increases in the proportion of votes cast for president as a percentage of the total population during the 1870s, there does not seem to have been a significant long-term increase in the percentage of eligible voters who turn out for the poll. The disenfranchisement of most African Americans and many poor whites in the South during the years 1890–1910 likely contributed to the decline in overall voter turnout percentages during those years visible in the chart at the top of the article.

There was no systematic collection of voter turnout data by gender at a national level before 1964, but smaller local studies indicate a low turnout among female voters in the years following Women's suffrage in the United States. For example, a 1924 study of voter turnout in Chicago found that "female Chicagoans were far less likely to have visited the polls on Election Day than were men in both the 1920 presidential election (46% vs. 75%) and the 1923 mayoral contest (35% vs. 63%)."[8] The study compared reasons given by male and female non-voters and found that female non-voters were more likely to cite general indifference to politics and ignorance or timidity regarding elections than male non-voters, and that female voter were less likely to cite fear of loss of business or wages. Most significantly, however, 11% of female non-voters in the survey cited a "Disbelief in woman's voting" as the reason they did not vote.

The graph of voter turnout percentages shows a dramatic decline in turnout over the first two decades of the twentieth century, ending in 1920 when the Nineteenth Amendment to the United States Constitution granted women the right to vote across the United States. But in the preceding decades, several states had passed laws supporting women's suffrage. Women were granted the right to vote in Wyoming in 1869, before the territory had become a full state in the union. In 1889, when the Wyoming constitution was drafted in preparation for statehood, it included women's suffrage. Thus Wyoming was also the first full state to grant women the right to vote. In 1893, Colorado was the first state to amend an existing constitution in order to grant women the right to vote, and several other states followed, including Utah and Idaho in 1896, Washington State in 1910, California in 1911, Oregon, Kansas, and Arizona in 1912, Alaska and Illinois in 1913, Montana and Nevada in 1914, New York in 1917; Michigan, South Dakota, and Oklahoma in 1918. Each of these suffrage laws expanded the body of eligible voters, and because women were less likely to vote than men, each of these expansions created a decline in voter turnout rates, culminating with the extremely low turnouts in the 1920 and 1924 elections after the passage of the Nineteenth Amendment.

This voting gender gap waned throughout the middle decades of the twentieth century. 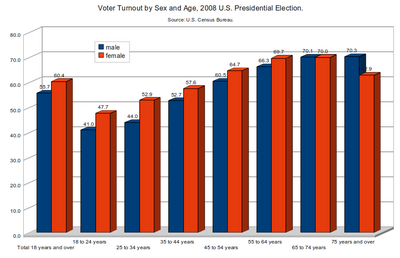 Voter turnout by sex and age for the 2008 U.S. Presidential Election.

The age difference is associated with youth voter turnout. Some argue that "age is an important factor in understanding voting blocs and differences" on various issues.[9] Others argue that young people are typically "plagued" by political apathy and thus do not have strong political opinions.[10] As strong political opinions may be considered one of the reasons behind voting,[11] political apathy among young people is arguably a predictor for low voter turnout. One study found that potential young voters are more willing to commit to voting when they see pictures of younger candidates running for elections/office or voting for other candidates, surmising that young Americans are "voting at higher and similar rates to other Americans when there is a candidate under the age of 35 years running".[12] As such, since most candidates running for office are pervasively over the age of 35 years,[13] youth may not be actively voting in these elections because of a lack of representation or visibility in the political process. "Only 30 percent of millennials think it's 'essential' to live in a democracy, compared to 72 percent of those born before World War II" (Gershman, 2018).[full citation needed] Considering that one of the critical tenets of liberal democracy is voting, the idea that millennials are denouncing[dubious – discuss] the value of democracy is arguably an indicator of the loss of faith in the importance of voting. Thus, it can be surmised that those of younger ages may not be inclined to vote during elections.

Recent decades have seen increasing concern over the fact that youth voter turnout is consistently lower than turnout among older generations. Several programs to increase the rates of voting among young people – such as MTV's "Rock the Vote" (founded in 1990) and the "Vote or Die" initiative (starting in 2004) – may have marginally increased turnouts of those between the ages of 18 and 25 to vote. However, the Stanford Social Innovation Review found no evidence of a decline in youth voter turnout. In fact, they argue that "Millennials are turning out at similar rates to the previous two generations when they face their first elections."[14] 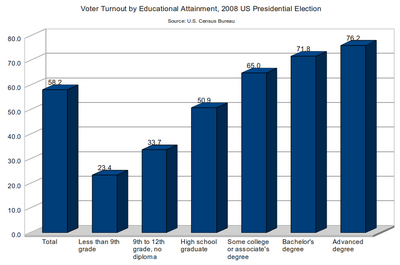 Rates in voting in the 2008 U.S. Presidential Election by educational attainment

Education is another factor considered to have a major impact on voter turnout rates. A study by Burman investigated the relationship between formal education levels and voter turnout.[15] This study demonstrated the effect of rising enrollment in college education circa 1980s, which resulted in an increase in voter turnout. However, "this was not true for political knowledge";[15] a rise in education levels did not have any impact in identifying those with political knowledge (a signifier of civic engagement) until the 1980s election, when college education became a distinguishing factor in identifying civic participation. This article poses a multifaceted perspective on the effect of education levels on voter turnout. Based on this article, one may surmise that education has become a more powerful predictor of civic participation, discriminating more between voters and non-voters. However, this was not true for political knowledge; education levels were not a signifier of political knowledge. Gallego (2010) also contends that voter turnout tends to be higher in localities where voting mechanisms have been established and are easy to operate – i.e. voter turnout and participation tends to be high in instances where registration has been initiated by the state and the number of electoral parties is small. One may contend that ease of access – and not education level – may be an indicator of voting behavior. Presumably larger, more urban cities will have greater budgets/resources/infrastructure dedicated to elections, which is why youth may have higher turnout rates in those cities versus more rural areas. Though youth in larger (read: urban) cities tend to be more educated than those in rural areas (Marcus & Krupnick, 2017), perhaps there is an external variable (i.e. election infrastructure) at play. Smith and Tolbert's (2005) research reiterates that the presence of ballot initiatives and portals within a state have a positive effect on voter turnout. Another correlated finding in his study (Snyder, 2011) was that education is less important as a predictor of voter turnout in states than tend to spend more on education. Moreover, Snyder's (2011) research suggests that students are more likely to vote than non-students. It may be surmised that an increase of state investment in electoral infrastructure facilitates and education policy and programs results in increase voter turnout among youth. 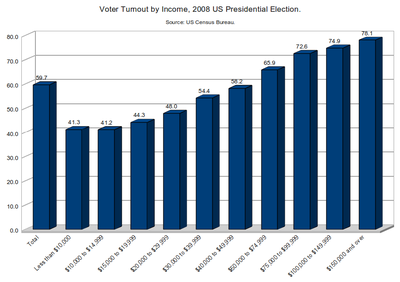 Rates of voting in the 2008 U.S. Presidential Election by income

Wealthier people tend to vote at higher rates. Harder and Krosnick (2008) contend that some of the reasons for this may be due to "differences in motivation or ability (sometimes both)" (Harder and Krosnick, 2008), or that less wealthy people have less energy, time, or resources to allot towards voting. Another potential reason may be that wealthier people believe that they have more at stake if they don't vote than those with less resources or income. Maslow's hierarchy of needs might also help explain this hypothesis from a psychological perspective. If those with low income are struggling to meet the basic survival needs of food, water, safety, etc., they will not be motivated enough to reach the final stages of "Esteem" or "Self-actualization" needs (Maslow, 1943) – which consist of the desire for dignity, respect, prestige and realizing personal potential, respectively. 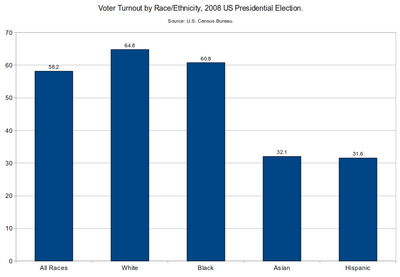 Voter turnout in the 2008 U.S. Presidential Election by race/ethnicity.

Race and ethnicity has had an effect on voter turnout in recent years, with data from recent elections such as 2008 showing much lower turnout among people identifying as Hispanic or Asian ethnicity than other voters (see chart to the right). One factor impacting voter turnout of African Americans is that, as of the 2000 election, 13% of African American males are reportedly ineligible to vote nationwide because of a prior felony conviction; in certain states – Florida, Alabama, and Mississippi – disenfranchisement rates for African American males in the 2000 election were around 30%.[18]