Vincent Terrell Jackson[1][2][3] (January 14, 1983 – February 15, 2021) was an American professional football player who played as a wide receiver for 12 seasons in the National Football League (NFL). He played college football at Northern Colorado, and was drafted by the San Diego Chargers in the second round of the 2005 NFL Draft. He also played for the Tampa Bay Buccaneers. Jackson was selected to the Pro Bowl three times and exceeded 1,000 receiving yards six times in his career.

Jackson attended Widefield High School in Colorado Springs, Colorado.[4] As a senior, he was a Rocky Mountain News All-State Honorable Mention, a first-team all-area pick, and a first-team all-conference pick.[5] He also was a standout in basketball.[5] A straight-A student in high school, Jackson was accepted to Columbia, but decided to attend University of Northern Colorado on a partial scholarship to play both basketball and football.[6]

Jackson enrolled at the University of Northern Colorado and played for the Northern Colorado Bears football [5] team from 2001-2004 [7] UNC was one of the few colleges that recruited Jackson out of high school.[citation needed] One of the few true freshmen to ever play for Northern Colorado, Jackson earned All-American honors as a punt returner, scoring the first time he ever touched a ball on a punt return against Adams State College.[5] He became Northern Colorado's all-time leader in receptions, receiving yards (game & season), kick return yards, punt return yards, and receiving touchdowns.[8] His senior season was highlighted by a 13-catch, 249-yard, three-touchdown effort against Florida Atlantic.[citation needed] Jackson is the all-time career record holder in receiving yards and yards per catch among various other, game, season, and career records. [7] Jackson also started for Northern Colorado in basketball,[9] playing for two seasons at UNC and leading the team in scoring both years. [10]

Jackson was selected in the second round (61st overall) of the 2005 NFL Draft (the highest ever by a Northern Colorado graduate) by the San Diego Chargers.

Jackson got off to a slow start in 2005 due to injuries.[citation needed] He was inactive for the first five games of the season and finally saw his first NFL action in an October 16 game against the Oakland Raiders.[13] Jackson caught his first pass on November 6 against the New York Jets, but he would only catch two more passes for the rest of the season.[13]

Jackson caught his first NFL touchdown on September 17, 2006, in a victory over the Tennessee Titans.[14] In the Chargers' Christmas Eve game against the Seattle Seahawks, Jackson had a memorable touchdown catch that led the Chargers to victory. With 29 seconds left, quarterback Philip Rivers threw a touchdown pass to Jackson and the Chargers ended up winning the game 20–17 and setting a franchise record for wins.[15] Jackson ended the season strongly and finished second on the team with six touchdown catches.[14]

In a 2006 game against the Oakland Raiders, Jackson nearly made one of the most bizarre turnovers in recent NFL history.[citation needed] After making a 13-yard catch on fourth down, Jackson immediately got up and spun the ball forward in celebration. Because Jackson had fallen on his own and was not tackled, Raiders cornerback Fabian Washington believed it to be a fumble and leapt upon the ball. Possession was originally awarded to Oakland, but the Chargers were then flagged for an illegal forward pass and allowed to keep the ball.[16]

By virtue of the release of Keenan McCardell and an injury to Eric Parker,[17][18] Jackson entered the 2007 season as a starting wide receiver for the Chargers.[citation needed] He started the season in an unmemorable fashion in a home game against the Chicago Bears by dropping a sure touchdown that bounced off his chest in the end zone.[citation needed] However, by the end of the season, Jackson had distinguished himself as a top target for Chargers quarterback Philip Rivers.[19] 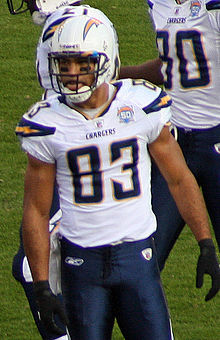 Jackson followed his strongest season as a pro with an even stronger one during the 2009 season, when he finished with 68 receptions, and led the team in receiving with 9 touchdowns and 1,167 yards.[22] During a January 17, 2010 divisional playoff game against the New York Jets, Jackson made a 37-yard catch that was challenged by Jets head coach Rex Ryan. Jackson received an unsportsmanlike conduct penalty for kicking the challenge flag, which cost the Chargers 15 yards (the play was upheld).[23] Jackson would finish the game with 7 receptions for 111 yards, becoming the first receiver of the 2009 NFL season to record a 100-yard game on the Jets All-Pro cornerback and future Buccaneer teammate Darrelle Revis.[24]

On March 2, 2010, Jackson faced arraignment for driving with a suspended license.[25] He was handcuffed briefly and had his car impounded following a traffic stop just a few hours before the Chargers' playoff loss to the New York Jets.[citation needed] Jackson was pulled over for playing loud music.[26] He was cited for driving with a suspended license and expired tags.[27]

Jackson was selected to his first Pro Bowl during the 2009 NFL season as an alternate.[28] Jackson had a strong showing in his first Pro Bowl appearance, racking in 7 receptions for 122 yards including a 48-yard catch and run for a touchdown.[29]

On July 1, 2010, it was announced that Jackson had been suspended for three games for violating the league's personal conduct policy.[30][31]

Following a contract dispute, Jackson returned in week 11 of the 2010 NFL season after holding out the first 10 games.[citation needed] In week 15 against the San Francisco 49ers, Jackson had a career-high 3 touchdowns and 112 yards en route to a 34–7 win.[32] He finished the season with 14 receptions and 248 yards.[33]

During the labor dispute between league owners and players following the end of the 2010 season, a lockout occurred from March 11 to July 25. Jackson was one of the 10 plaintiffs in the Brady antitrust lawsuit against the NFL,[35] which included star players such as Tom Brady, Peyton Manning, Drew Brees, and fellow 2010 holdout Logan Mankins. Initially, Adam Schefter of ESPN reported that Vincent Jackson wanted compensation in the form of $10 million or to become an unrestricted free agent when the lockout was over.[36] Jackson denied reports that he had asked for compensation, but on July 23 Jackson released his claim in the Brady v. NFL lawsuit.[citation needed] Jackson's decision to drop his alleged request of unrestricted free agency and/or monetary compensation helped expedite the completion of the new labor deal.[citation needed] Jackson's Franchise Tag was held up under the new NFL CBA.[37]

On July 29, 2011, the first day teams were permitted to sign non-rookie free agents, Jackson signed his one-year Franchise offer, thus remaining a Charger.[38] Because of his contract holdout during the 2010 NFL season, Jackson received only $583,000 in compensation for playing in the final six games of the season.[39] For the 2011 season, under the franchise tag, Jackson received approximately $11.4 million, almost 20 times more than in the previous season.[40] In week nine, Jackson played a personal best of 141 yards and 3 touchdowns against the Green Bay Packers.[citation needed] He finished the season with totals of 60 catches for 1,106 yards and nine touchdowns.[41] He was named to the Pro Bowl as an alternate for Wes Welker.[42]

When the NFL's Collective Bargaining Agreement expired, Jackson became a Restricted Free Agent for an additional year, causing the Chargers to place a one-year, $3.2 million tender on him.[43] Seeking a long-term deal instead, Jackson held out of training camp. On June 15, 2010, the Chargers cut his tender to $583,000 for holding out, 110% of his salary for the 2009 NFL season.[44]

On August 20, 2010, the Chargers placed him on the Roster Exempt List, meaning that he would have to serve a 3-game suspension once he had agreed to a contract.[45] The National Football League Players Association arranged a deal in which if Jackson was traded by the Chargers by 4 PM on September 22, he would have instead been placed on the Commissioner Exempt List, rolling 6 games of suspensions (3 for pleading guilty to drunk driving and 3 for being placed on the roster exempt list) into 4. No deal materialized.[46] The agreement also stipulated that he could be traded two days before the NFL trade deadline, but once again no deal materialized in that time.[47] On October 29, 2010, Jackson ended his hold-out and signed the one-year tender. The deadline to sign and accrue a full season, so that he would be an unrestricted free agent in 2011, was October 30, 2010.[48]

On March 13, 2012, Jackson signed a 5-year, $55.55 million contract with the Tampa Bay Buccaneers.[49] On September 7, 2012, Jackson was elected a team captain.[50] On October 21 against the New Orleans Saints, Jackson set multiple Buccaneer records, with the longest reception and longest play from scrimmage in Tampa Bay history (95 yards) and the most receiving yards in a single game (216 yards).[51] Jackson was selected to his third Pro Bowl to replace the injured Calvin Johnson.[52]

On September 5, 2013, Jackson was selected as one of the 2013 team captains.[54] On October 13, 2013, in a game against the Philadelphia Eagles, Jackson caught his first touchdown since December 2012.[55] He finished the day with 9 catches for 114 yards and 2 touchdowns.[citation needed] The next week, against the Atlanta Falcons, Jackson again had multiple touchdowns while eclipsing the 100 yard mark.[56] At the conclusion of a very disappointing 4–12 season, Jackson proved to be one of the few bright spots on a football team in disarray compiling 78 catches for 1,224 yards and seven touchdowns.[57]

The 2014 season saw declines in Jackson's catches and yards due to the emergence of rookie wide receiver Mike Evans.[citation needed] Jackson also was the center of trade rumors before the trade deadline but was ultimately not traded.[58] He finished the 2014 season with over 1,000 yards for the sixth time in his career.[citation needed] He and fellow receiver Mike Evans became the first Buccaneer duo to ever catch for over 1,000 yards.[citation needed] In week 12, Jackson surpassed 8,000 career receiving yards in a game against the Chicago Bears.[59]

With the arrival of rookie quarterback Jameis Winston and new offensive coordinator Dirk Koetter, Jackson's numbers saw further decline during the 2015 season, during which injuries and inconsistent play resulted in Jackson's fewest catches (33), yards (543), and touchdowns (3) since coming to Tampa.[60] On December 30, 2015 Jackson was placed on injured reserve, ending his season.[61]

On October 18, 2016, Jackson was placed on injured reserve after suffering a knee injury in Week 5 in a win against the Carolina Panthers.[62]

Jackson, in 2013 during a visit at Camp Leatherneck in Afghanistan

Both of Jackson's parents served in the United States Armed Forces.[65] He sponsored military families at every Buccaneers home game through the 'Jackson in Action' Front Row Fans section at Raymond James Stadium.[citation needed]

In November 2012, Jackson spoke to students at Northwest Elementary about the importance of physical fitness, helped present a $10,000 Play 60 grant, and led students through a physical education class to congratulate the winners of the Play 60 Super School contest.[9]

In 2016, Jackson graduated from the University of South Florida with a degree in Business Management.[66]

On February 15, 2021, Jackson was found dead by a housekeeper in a room at Homewood Suites near Brandon, Florida. There were no apparent signs of trauma.[67] On February 17, the sheriff of Hillsborough County announced that Jackson's family said he may have suffered from chronic alcoholism, which contributed to his death. He also stated that they believed he suffered from the brain disease chronic traumatic encephalopathy (CTE), which can only be confirmed after death from a biopsy of the brain.[68] The family responded that the sheriff did not speak on their behalf.[69] They donated Jackson's brain to the Boston University CTE Center.[70] His body was cremated after his family held a private funeral service.