UFC 264: Poirier vs. McGregor 3 was a mixed martial arts event produced by the Ultimate Fighting Championship that took place on the 10th of July 2021 at the T-Mobile Arena in Paradise, Nevada, part of the Las Vegas Metropolitan Area, United States.[3] 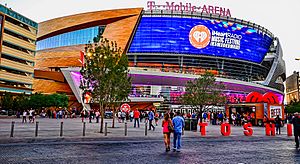 Due to the COVID-19 pandemic, the UFC has been hosting most of its events in Las Vegas at the UFC Apex facility, all of them behind closed doors.[4] This was the first time since UFC 248 in March 2020 that T-Mobile Arena hosted an event, with a full capacity crowd attending it.[5]

A lightweight trilogy between former interim UFC Lightweight Champion Dustin Poirier and former UFC Featherweight and Lightweight Champion Conor McGregor headlined the event.[6] Their first fight was a featherweight bout that happened in September 2014 at UFC 178, where McGregor won by first-round technical knockout.[7] They then ascended to lightweight for an eventual rematch in January 2021 at UFC 257, where Poirier prevailed via second-round knockout.[8] During fight week, it was revealed that former lightweight champion Rafael dos Anjos was selected by the organization to serve as a potential replacement in case of need.[9]

A middleweight bout between former KSW Welterweight Champion Dricus du Plessis and Trevin Giles was scheduled to take place at UFC on ESPN: Brunson vs. Holland, but du Plessis was pulled from the event due to visa issues which restricted his travel.[10] The pairing was rescheduled and took place at this event.[11]

A welterweight bout between Sean Brady and former interim UFC Lightweight Championship challenger Kevin Lee was expected to take place at the event.[12] However, Lee withdrew due to injury and the bout was removed from the event.[13]

A bantamweight bout between Sean O'Malley and Louis Smolka was expected to take place at the event.[14] However on June 29, Smolka withdrew due to an undisclosed injury.[15] He was replaced by promotional newcomer Kris Moutinho.[16]

At the weigh-ins, Irene Aldana weighed in at 139.5 pounds, three and a half pounds over the bantamweight non-title fight limit. Her bout proceeded at catchweight and she was fined 30% of her purse, which went to her opponent Yana Kunitskaya.[17]

A middleweight bout between Alen Amedovski and Hu Yaozong was scheduled to the be the first preliminary bout of the event.[19] However, it was cancelled just hours before taking place due to COVID-19 protocol issues in Amedovski's camp.[20]