the most complete early hominin skeleton ever found

Turkana Boy, also called Nariokotome Boy, is the name given to fossil KNM-WT 15000, a nearly complete skeleton of a Homo ergaster youth who lived 1.5 to 1.6 million years ago. This specimen is the most complete early hominin skeleton ever found.[1] It was discovered in 1984 by Kamoya Kimeu on the bank of the Nariokotome River near Lake Turkana in Kenya.[2][3]

Estimates of the individual's age at death range from 7 to 11 years old.[4]

Although the specimen is largely considered male due to the shape of the pelvis, the sex is ultimately indeterminate due to its prepubescent age. Estimates of the age at death depend on whether the maturity stage of the teeth or skeleton is used, and whether that maturity is compared to that of Homo sapiens or to chimpanzees. A key factor is that, while modern humans have a marked adolescent growth spurt, chimpanzees do not. While initial research assumed a modern human type of growth, more recent evidence from other fossils suggests this was less present in early Hominids. This affects the estimation of both the age and the likely stature of the specimen as a fully grown adult.[4]

Alan Walker and Richard Leakey in 1993 estimated the boy to have been about 11–12 years old based on known rates of bone maturity.[5][nb 1] Walker and Leakey (1993) said that dental dating often gives a younger age than a person's actual age.[6][nb 2]

The specimen comprises 108 bones, making it the most complete early human skeleton discovered. The Smithsonian estimates that he was 1.6 m (5 ft 3 in) tall and weighed 48 kg (106 lb) when he died, and may have been close to his adulthood height.[10] In adulthood, Turkana Boy might have reached 185 centimetres (6.07 ft) tall and massed 68 kilograms (150 lb). The pelvis is narrower than in Homo sapiens, which is most likely for more efficient upright walking. This further indicates a fully terrestrial bipedalism, which is unlike older hominin species that show a combined feature of bipedalism and tree climbing.[11] The Boy was relatively tall, which increased his body surface area that would enhance heat dissipation and prevent heat stress under the hot sun.[3][12] 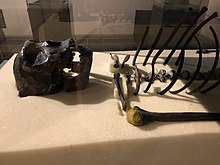 The overall KNM-WT 15000 skeleton still had features (such as a low sloping forehead, strong brow ridges, and the absence of a chin) not seen in H. sapiens. However, there are significant defining characters, such as bigger brain size (880 cc). The arms and legs are slightly longer indicating effective bipedality. The nose is projecting like those of humans rather than the open flat nose seen in other apes.[13] Body hair may also have been thinner (most likely naked) and possibly with increased sweat glands to hasten cooling. The skin also was probably dark, with abundant melanin, to better cope with direct tropical sun rays in the African savannah.[14][15]

The fossil skeleton and other fossil evidence, such as Acheulean stone tools, prompt the majority of scientists to conclude that Homo ergaster and Homo erectus – unlike their more primitive ancestors – became efficient hunters. The social structure would probably have become more complex with a larger brain volume; the Broca's area of the brain allows speech and is noted by a slight slant on the cranium. Turkana Boy's thoracic vertebrae are narrower than in Homo sapiens.[16] This would have allowed him less motor control over the thoracic muscles that are used in modern humans to modify respiration to enable the sequencing upon single exhalations of complex vocalisations.[17]

Early studies indicated that Turkana Boy suffered from a congenital disorder, either dwarfism or scoliosis. This was because the rib bones appeared asymmetrical to the spine, at the time attributed to skeletal dysplasia.[18] However, in 2013, a study showed that when the rib bones were rearranged, they became symmetrical against the spine, and that an unusual structure of the vertebrae was characteristic of the early hominins. However, the fossil definitely showed lumbar disc herniation, an injury implicated with the specimen's death.[1] The specimen also had a diseased mandible.[8]