Extinct genus of soft-bodied sea animals
Not to be confused with Telly Monster.

Tullimonstrum, colloquially known as the Tully monster, is an extinct genus of soft-bodied bilaterian that lived in shallow tropical coastal waters of muddy estuaries during the Pennsylvanian geological period, about 300 million years ago. A single species, T. gregarium, is known. Examples of Tullimonstrum have been found only in the Mazon Creek fossil beds of Illinois, United States. Its classification has been the subject of controversy, and interpretations of the fossil have likened it to molluscs, arthropods, conodonts, worms, and vertebrates.

Life reconstruction of T. gregarium as a vertebrate, based on studies by McCoy et al. 2016

Tullimonstrum probably reached lengths of up to 35 centimetres (14 in); the smallest individuals are about 8 cm (3.1 in) long.[2]

Tullimonstrum had a pair of vertical, ventral fins (though the fidelity of preservation of fossils of its soft body makes this difficult to determine) situated at the tail end of its body, and typically featured a long proboscis with up to eight small sharp teeth on each "jaw", with which it may have actively probed for small creatures and edible detritus in the muddy bottom. It was part of the ecological community represented in the unusually rich group of soft-bodied organisms found among the assemblage called the Mazon Creek fossils from their site in Grundy County, Illinois.[3]

The absence of a hard part in the fossil implies that the animal did not possess organs composed of bone, chitin or calcium carbonate.[2] There is evidence of serially repeated internal structures.[2] Its head is poorly differentiated.[2] A transverse bar-shaped structure, which was either dorsal or ventral, terminates in two round organs[2][3] which are associated with dark material which have been identified as melanosomes (containing the pigment melanin).[4] Their form and structure is suggestive of a camera-type eye.[2][4] Tullimonstrum possessed structures which have been interpreted as gills, and a possible notochord or rudimentary spinal cord.[1][5] 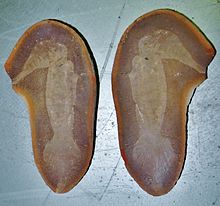 Amateur collector Francis Tully found the first of these fossils in 1955 in a fossil bed known as the Mazon Creek formation. He took the strange creature to the Field Museum of Natural History, but paleontologists were stumped as to which phylum Tullimonstrum belonged.[6] The species Tullimonstrum gregarium ("Tully's common monster"), as these fossils later were named, takes its genus name from Tully,[2] whereas the species name, gregarium, means "common", and reflects its abundance.[7] The term monstrum ("monster") relates to the creature's outlandish appearance and strange body plan.

The fossil remained "a puzzle", and interpretations likened it to a worm, a mollusc, an arthropod, a conodont,[8] or a vertebrate.[4][1] Since it appeared to lack characteristics of the well-known modern phyla, it was speculated that it was representative of a stem group to one of the many phyla of worms that are poorly represented today.[2] Similarities with Cambrian fossil organisms were noted. Chen et al. suggested similarities to Vetustovermis planus.[9] Others pointed to a general resemblance between Tullimonstrum and Opabinia regalis,[10] although Cave et al. noted that they were too morphologically dissimilar to be related.[11]

Arguments in favor of vertebrate affinities

In 2016 a morphological study showed that Tullimonstrum may have been a basal vertebrate, and thus a member of the phylum Chordata,[1][4] with one study suggesting Tullimonstrum may be closely related to modern lampreys.[1] This affinity was attributed based on pronounced cartilaginous arcualia, a dorsal fin and asymmetric caudal fin, keratinous teeth, a single nostril, and tectal cartilages like in lampreys. McCoy et al. raised the possibility that Tullimonstrum belongs to the ancestral group of lamprey,[1][12] but it also has many features not found in Cyclostomes (lampreys and hagfishes). A second study found further evidence that Tullimonstrum was a stem vertebrate: a camera-like eye, with preserved lenses and the presence of cylindrical and spheroid melanosomes in the eye arranged in distinct layering. These ocular pigments and their unique structure was interpreted to be a retinal pigmented epithilium (RPE), indicating for the first time that the bar organs were indeed eyes. Furthermore, Clements, et al.[4] chemically confirmed the presence of fossil melanin as opposed to ommochromes or pterines (ocular pigments used by many invertebrate groups). Although the ocular pigments of many invertebrate groups have been poorly investigated, there is strong evidence that the dual melanosome morphology and presence of an RPE is a uniquely vertebrate trait.[4]

In 2020, McCoy and colleagues used Raman spectroscopy to identify the molecular bonds present in the organic material preserved with Tullimonstrum. Based on samples from multiple points in the body, they identified the organic material as representing proteins and their decay products (as is seen in vertebrates) as opposed to the polysaccharide-based chitin (as is seen in arthropods), supporting the interpretation that Tullimonstrum is a vertebrate.[13]

Arguments in favour of non-vertebrate affinities

A 2017 study rejected the above conclusions. Firstly, it was noted that even the presence of the two melanosome types is variable among vertebrates; hagfish lack them altogether, and extant sharks as well as extinct forms found in the Mazon Creek area, such as Bandringa, only have spheroid melanosomes. Additionally, the supposed notochord extends in front of the level of the eyes, which is not the case in any other vertebrate; even if it was a notochord, the presence of notochords is not limited to vertebrates either. Further criticism was drawn towards the identification of the blocks of the body variously as gill pouches and muscle blocks (myomeres), despite the lack of differentiation in the structure of these blocks. In vertebrates, myomeres are also thinner, and extend along the whole length of the body rather than stopping short of the head. Meanwhile, the gill pouches of lampreys are paired extensions rather than segmented structures, and are usually embedded in a complex gill skeleton, neither of which is the case in Tullimonstrum.[14][15]

Other identifications of soft-tissue structures were considered as being equally problematic. The supposed brain has no associated nervous tissue and is not connected to the eyes, and the purported liver was located under the gills as opposed to being further back as in other vertebrates. The "mouth" at the front of the proboscis was described as possessing gnathostome-like distinct tooth rows, despite lampreys having "tooth fields" on the interior of the mouth. This would necessitate the convergent re-evolution of grasping jaws. Additionally, the thin and jointed proboscis is inconsistent with a role in ram or suction feeding, which is the feeding method typically used for open-water vertebrates; the gill pouches would have further obstructed the flow of water.[14]

The study noted that stalked eyes, tail fins, and brains are also present in anomalocaridids, and that Opabinia also has a similar proboscis. While arthropod affinities were rejected under the assumption that other Mazon Creek arthropods are preserved in three-dimensions with carbonization of the exoskeleton, this is not actually the case. Although arthropods do not have the melanosomes of vertebrates, some do have convergently evolved spheroid eye cells that may be preserved similarly; however, these pigments (ommochromes and pterines) have unique chemical signatures which were not found in the eyes of Tullimonstrum.[4] Sallen, et al.[14] also suggested that molluscs convergently evolved complex camera-like eyes containing melanosomes, but failed to note that no known molluscs have dual melanosome morphologies.[4] Further similarities (such as the lobed brain, muscle bands, tail fin, proboscis, and "teeth") could support possible molluscan affinities. Even if the eye of Tullimonstrum is homologous with vertebrates, it could be a tunicate (the larvae of which have pigmented eyes and tail fins), a lancelet or an acorn worm (both of which have gill openings and a notochord), or a vetulicolian.[14]

Tullimonstrum was probably a free-swimming carnivore that dwelt in open marine water, and was occasionally washed to the near-shore setting in which it was preserved.[2]

The formation of the Mazon Creek fossils is unusual. When the creatures died, they were rapidly buried in silty outwash. The bacteria that began to decompose the plant and animal remains in the mud produced carbon dioxide in the sediments around the remains. The carbonate combined with iron from the groundwater around the remains, forming encrusting nodules of siderite. The organism was entombed, retarding decay and allowing an impression of the organism to be preserved. The mechanisms of preservation in the Mazon Creek are poorly understood.[16]

The combination of rapid burial and rapid formation of siderite resulted in excellent preservation of the many animals and plants that were entombed in the mud. As a result, the Mazon Creek fossils are one of the world's major Lagerstätten, or concentrated fossil assemblages.[2] The rapid burial and compression often caused Tullimonstrum carcasses to fold and bend like other Mazon Creek animals.[4]

The proboscis is rarely preserved in its entirety; it is complete in around 3% of specimens. However, some part of the organ is preserved in about 50% of cases.[2]

A 1966-68 prank promulgated by paleontologist Bryan Patterson suggested that modern representatives could possibly be found in remote lakes of Kenya, known under the local name "Ekurut Loedonkakini". These "dancing worms of Turkana" could supposedly kill a man with a bite, produced some sort of milk, and were known even to school-age children. Patterson had several letters sent from Kenya under various aliases to Eugene Richardson, the Field Museum's curator of fossil invertebrates. Patterson had previously been the museum's curator of vertebrate paleontology and retained an accomplice there who was aware of the prank (and prevented it from going too far). A planned expedition was cancelled after the hoax was disclosed in a good-natured Christmas letter.[17][18] Richardson later recounted the story and published the original letters, poems, and doctored photos in a book under the pseudonym E. Scumas Rory.[19]

In 1989, Tullimonstrum gregarium was officially designated the state fossil of Illinois. Artwork of it is featured on U-Haul rental vehicles from the state.[7][20]