Tina Louise (née Blacker; February 11, 1934) is an American actress best known for playing movie star Ginger Grant in the CBS television situation comedy Gilligan's Island. She began her career on stage during the mid-1950s before landing her breakthrough role in 1958 drama film God's Little Acre for which she received the Golden Globe Award for New Star of the Year.

Louise had starring roles in The Trap, The Hangman, Day of the Outlaw, and For Those Who Think Young. She also appeared in The Wrecking Crew, The Happy Ending, and The Stepford Wives (1975).

Upon the death of Dawn Wells in 2020, Louise became the last surviving original cast member of the Gilligan's Island TV series.

Louise was born Tina Blacker in a Jewish family in New York City. By the time she was four years of age, her parents had divorced. She was an only child and was raised by her mother Sylvia Horn (née Myers) Blacker (1916–2011), a fashion model. Tina's father Joseph Blacker was a candy store owner in Brooklyn and later an accountant.[1] The name Louise was allegedly added during her senior year in high school when she mentioned to her drama teacher that she was the only girl in the class without a middle name and he suggested it. She attended Miami University in Ohio after high school.[2]

Louise got her first role at age two after being in an ad for her father's candy store. She began studying acting, singing, and dancing at age 17 under Sanford Meisner at the Neighborhood Playhouse in Manhattan. She was offered modeling jobs, including the 1958 Frederick's of Hollywood catalog, and she appeared on the cover of several pinup magazines such as Adam, Sir! and Modern Man. Her pictorials for Playboy in May 1958 and April 1959 were arranged by Columbia Pictures studio in an effort to promote her.[citation needed] 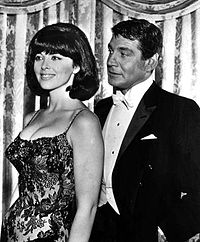 Louise with Gene Barry from the television series Burke's Law (1964)

Her acting debut came in 1952 in the Bette Davis musical revue Two's Company,[2] followed by roles in other Broadway productions such as John Murray Anderson's Almanac, The Fifth Season, and Will Success Spoil Rock Hunter? She appeared in the live television dramas Studio One, Producers' Showcase, and Appointment with Adventure. In 1957, she appeared on Broadway in the musical Li'l Abner.[3]

Louise made her film debut in 1958 in God's Little Acre. That same year, the National Art Council named her the "World's Most Beautiful Redhead."[4] The next year, she starred in Day of the Outlaw with Robert Ryan. She became a leading lady for stars such as Robert Taylor and Richard Widmark, often playing somber roles. She turned down roles in the films of Li'l Abner and Operation Petticoat,[5] taking roles on Broadway and in Italian cinema. Among her Italian film credits were The Siege of Syracuse directed by Pietro Francisci, and Garibaldi (1960), directed by Roberto Rossellini that concerned Garibaldi's efforts to unify the Italian states in 1860. Louise returned to the United States, began studying with Lee Strasberg,[6] and became a member of the Actors Studio.[7][8] In 1962, she guest-starred on the situation comedy The Real McCoys, portraying a country girl from West Virginia in the episode "Grandpa Pygmalion". She appeared with Bob Denver two years later in the beach party film For Those Who Think Young.

In 1964, she left the Broadway musical Fade Out – Fade In to portray movie star Ginger Grant on the situation comedy Gilligan's Island, after Jayne Mansfield turned it down. Over time, she became unhappy with the role and was worried that it would typecast her. When the series ended in 1967, she was unable to resume her career as an upcoming major film star since those roles were no longer being offered to her. Although she continued to work in film and made guest appearances on television, she claimed repeatedly that playing Ginger ruined her movie career. She did not appear in any of the subsequent Gilligan's Island sequel movies: Rescue from Gilligan's Island, The Castaways on Gilligan's Island, or The Harlem Globetrotters on Gilligan's Island. She did appear in the Matt Helm spy spoof The Wrecking Crew (1969) with Dean Martin and in The Stepford Wives (1975).

Louise attempted to shed her comedic image by playing darker roles, such as a guest appearance as a heroin addict in a 1974 Kojak episode and as a corrections officer in the 1976 television movie Nightmare in Badham County. Her other television appearances of the period included Look What's Happened to Rosemary's Baby (1976), SST: Death Flight (1977), Friendships, Secrets and Lies (1979), and the soap opera Dallas during the 1978–1979 seasons. In the fall of 1984, she replaced Jo Ann Pflug as Taylor Chapin on the syndicated soap opera Rituals. 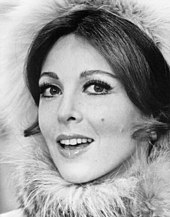 Louise declined to participate in any of three Gilligan's Island reunion television films. Despite maintaining a steady acting career after the series ended, she stated repeatedly that the show had actually ruined her career. The role of Ginger was recast with Judith Baldwin and Constance Forslund. Although she did not appear in the television movies, she made brief walk-on appearances on a few talk shows and specials for Gilligan's Island reunions, including Good Morning America (1982), The Late Show (1988) and the 2004 TV Land award show with the other surviving cast members. In the 1990s, she was reunited with costars Bob Denver, Dawn Wells, and Russell Johnson in an episode of Roseanne.[2] She did not reunite with them for the television film Surviving Gilligan's Island (2001), co-produced by Wells. She was portrayed by Kristen Dalton in the television film.[9] Her relations with series star Denver were rumored to be strained, but in 2005, she wrote a brief, affectionate memorial to him in the year-end "farewell" issue of Entertainment Weekly.[10]

Following the news of Dawn Wells' passing in December 2020, Louise denied any longtime rumors that she resented the role of Ginger Grant, "Never true — I loved doing my part, especially after they really started writing for my character, originally billed as a 'Marilyn Monroe' type of character. A different director took over and really started to write for my character. I really loved my character." She also said that she was very grateful to the show's fans for their continued support especially during the COVID-19 pandemic, "We were part of the wonderful show that everyone loves and has been a great source of comfort, especially during these times. We brought a lot of joy to people and still do. This show is an escape from so many things going on. Fathers share it with their children now. I get letters all the time about that."[11]

Later film roles included a co-starring appearance in the Robert Altman comedy O.C. and Stiggs (1987) as well as the independently made satire Johnny Suede (1992) starring Brad Pitt. She appeared in Married... with Children as Miss Beck in episode "Kelly Bounces Back" (1990). In 2014, Louise starred in the spiritual drama, Tapestry and the horror film Late Phases.[12][13]

Louise made one record album, It's Time for Tina, which was released originally on Concert Hall in 1957 (Concert Hall 1521), and later reissued on Urania Records (1958 and 1959 respectively).[14] With arrangements by Jim Timmens and Buddy Weed's Orchestra, 12 tracks include "Tonight Is the Night" and "I'm in the Mood for Love." Coleman Hawkins is featured on tenor sax. The album has been reissued on CD twice, most recently on the UK label Harkit Records.[15] The album was released on iTunes in 2012. She also recorded for United Artists Records[16] but recorded just one single for that label in 1958.[17]

From 1966 to 1971, Louise was married to radio and TV announcer/interviewer Les Crane, with whom she had one daughter, Caprice Crane (born 1970),[18][19] who became an MTV producer and a novelist.[citation needed] Crane's first novel, Stupid and Contagious, was published in 2006,[20] and was dedicated to her mother.[21]

Louise now resides in New York City. She is a member of the Academy of Motion Picture Arts and Sciences and a lifetime member of the Actors Studio.[22] Louise has been a vocal advocate for improving child literacy. She donated a portion of the proceeds of her 2007 book, When I Grow Up, to literacy programs and said in a 2013 interview that she had been volunteering at local public schools since 1996.[22][23] She has written three books including Sunday: A Memoir (1997) and When I Grow Up (2007).[2] The latter is a children's book that inspires children to believe they can become whatever they choose through creative and humorous comparisons of animal kingdom achievements.[citation needed] She also published a second children's book titled What Does a Bee Do? in 2009.[24]

Louise is quoted as saying, "The best movie you'll ever be in is your own life because that's what matters in the end."[25]

A Democrat, she campaigned for John F. Kennedy during the 1960 presidential election.[26]