Katherine Matilda Swinton (born 5 November 1960) is a British actress. She is known for her leading roles in independent film and occasional supporting roles in blockbusters. Nominated for numerous accolades, she won the Academy Award for Best Supporting Actress and the BAFTA Award for Best Actress in a Supporting Role for her performance in the 2007 film Michael Clayton. She also won the British Academy Scotland Award as Best Actress for the 2003 film Young Adam, and has received three Golden Globe Award nominations.[3][4]

Swinton began her career in experimental films, directed by Derek Jarman, starting with Caravaggio (1986), followed by The Last of England (1988), War Requiem (1989), and The Garden (1990). Swinton won the Volpi Cup for Best Actress at the Venice Film Festival for her portrayal of Isabella of France in Edward II (1991). She next starred in Sally Potter's Orlando (1992), and was nominated for the European Film Award for Best Actress.

Swinton was nominated for a Golden Globe Award for her performance in The Deep End (2001). She followed this with appearances in Vanilla Sky (2001), Adaptation (2002), Constantine (2005), Michael Clayton (2007), Julia (2008), and I Am Love (2009). She won the European Film Award for Best Actress and received a nomination for the BAFTA Award for Best Actress in a Leading Role for the psychological thriller We Need to Talk About Kevin (2011). She is also known for her performance as the White Witch in The Chronicles of Narnia series (2005–2010) and the Ancient One in the Marvel Cinematic Universe franchise.

Swinton was given the Richard Harris Award by the British Independent Film Awards in recognition of her contributions to the British film industry. In 2013, she was given a special tribute by the Museum of Modern Art.[5] In 2020, Swinton was named as a recipient of the British Film Institute Fellowship, the highest honour presented by the Institute which honours individuals in "recognition of their outstanding contribution to film or television culture,"[citation needed] and was thirteenth in The New York Times' list of the 25 Greatest Actors of the 21st Century.[6]

Katherine Matilda Swinton was born on 5 November 1960 in London, the daughter of Judith Balfour (née Killen; 1929–2012) and Sir John Swinton (1925–2018), the Laird of Kimmerghame House. She has three brothers.[7] Her father was a retired major general in the British Army, and was Lord Lieutenant of Berwickshire from 1989 to 2000. Her mother was Australian.[8][9][10] Her paternal great-grandfather was a Scottish politician and herald, George Swinton, and her maternal great-great-grandfather was the Scottish botanist John Hutton Balfour.[11]

The Swinton family is an ancient Anglo-Scots family that can trace its lineage to the Middle Ages.[12] Swinton considers herself "first and foremost" a Scot.[13]

Swinton attended three independent schools: Queen's Gate School in London, the West Heath Girls' School, and also Fettes College for a brief period.[14] West Heath was an expensive boarding school, where she was a classmate and friend of Lady Diana Spencer (later Princess of Wales).[9] As an adult, Swinton has spoken out against boarding schools, stating that West Heath was "a very lonely and isolating environment" and that she thinks boarding schools "are a very cruel setting in which to grow up and I don't feel children benefit from that type of education. Children need their parents and the love parents can provide."[15] Swinton spent two years as a volunteer in South Africa and Kenya before University.[16]

In 1983, Swinton graduated from New Hall at the University of Cambridge with a degree in Social and Political Sciences. While at Cambridge, she joined the Communist Party;[17] she later joined the Scottish Socialist Party. It was in college that Swinton began performing on stage.[18][19] 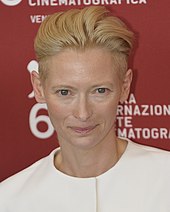 Swinton at the 2009 Venice Film Festival

Swinton joined the Royal Shakespeare Company in 1984, appearing in Measure for Measure.[20] She also worked with the Traverse Theatre in Edinburgh, starring in Mann ist Mann by Manfred Karge in 1987.[21][22] On television, she appeared as Julia in the 1986 mini-series Zastrozzi: A Romance based on the Gothic novel by Percy Bysshe Shelley. Her first film was Caravaggio in 1986, directed by Derek Jarman. She went on to star in several Jarman films, including The Last of England (1987),[23] War Requiem (1989)[23] opposite Laurence Olivier, and Edward II (1991),[23] for which she won the Volpi Cup for Best Actress at the 1991 Venice Film Festival.[24]

Swinton performed in the performance art piece Volcano Saga by Joan Jonas in 1989. The 28-minute video art piece is based on a 13th-century Icelandic Laxdeala Saga, and it tells a mythological myth of a young woman whose dreams tell of the future.

Swinton also played the title role in Orlando, Sally Potter's film version of the novel by Virginia Woolf. The part allowed Swinton to explore matters of gender presentation onscreen, which reflected her lifelong interest in androgynous style. Swinton later reflected on the role in an interview accompanied by a striking photo shoot. "People talk about androgyny in all sorts of dull ways," said Swinton, noting that the recent rerelease of Orlando had her thinking again about its pliancy. She referred to 1920s French artist and playful gender-bender Claude Cahun: "Cahun looked at the limitlessness of an androgynous gesture, which I've always been interested in."[25]

Recent years have seen Swinton move toward mainstream projects, including the leading role in the American film The Deep End (2001), in which she played the mother of a gay son she suspects of killing his boyfriend. For this performance, she was nominated for a Golden Globe Award. She appeared as a supporting character in the films The Beach (2000),[23] featuring Leonardo DiCaprio, Vanilla Sky (2001), and as the archangel Gabriel in Constantine. Swinton appeared in the British films The Statement (2003) and Young Adam (2003). 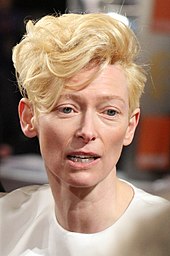 In 2007, Swinton's performance as Karen Crowder in Michael Clayton earned her both a BAFTA award for Best Supporting Actress as well as the Oscar for Best Performance by an Actress in a Supporting Role at the 2008 80th Academy Awards, the film's sole win.[27][28][29]

Swinton next appeared in the 2008 Coen Brothers film Burn After Reading. She was cast in the role of Elizabeth Abbott in The Curious Case of Benjamin Button, alongside Cate Blanchett and Brad Pitt.

She had a starring role as the eponymous character in Erick Zonca's Julia, which premiered at the 2008 Berlin International Film Festival and saw a .S. release in May 2009.[30][31][32]

She starred in the film adaptation of the novel We Need to Talk About Kevin, released in October 2011. She portrayed the mother of the title character, a teenage boy who commits a high school massacre.[33]

In 2015, she starred in Luca Guadagnino's thriller A Bigger Splash, opposite Dakota Johnson, Matthias Schoenaerts and Ralph Fiennes.[36]

Swinton also portrayed the Ancient One in the Marvel Cinematic Universe, appearing in the 2016 film Doctor Strange and the 2019 film Avengers: Endgame.[37][38][39][40]

Swinton starred in Luca Guadagnino's 2018 remake of the horror film Suspiria.[41][42][43] She played several roles, and was credited as Lutz Ebersdorf. 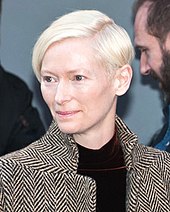 In 1995, with producer Joanna Scanlan, Swinton developed a performance/installation live art piece in the Serpentine Gallery, London, where she was on display to the public for a week, asleep or apparently so, in a glass case, as a piece of performance art. The piece is sometimes wrongly credited to Cornelia Parker, whom Swinton invited to collaborate for the installation in London. The performance, titled The Maybe, was repeated in 1996 at the Museo Barracco in Rome and in 2013 at the Museum of Modern Art in New York.[44]

Swinton has collaborated with the fashion designers Viktor & Rolf. She was the focus of their One Woman Show 2003, in which they made all the models look like copies of Swinton, and she read a poem (of her own) that included the line "There is only one you. Only one".[45]

In August 2006, she opened the new Screen Academy Scotland production centre in Edinburgh.[50]

In July 2008, she founded the film festival Ballerina Ballroom Cinema of Dreams.[51] The event took place in a ballroom in Nairn on Scotland's Moray Firth in August. Swinton has collaborated with artist Patrick Wolf on his 2009 album The Bachelor, contributing four spoken word pieces.[52] 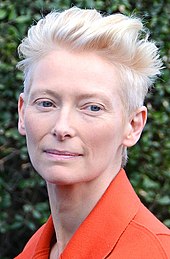 In 2009, Swinton and Mark Cousins embarked on a project where they mounted a 33.5-tonne portable cinema on a large truck, hauling it manually through the Scottish Highlands, creating a travelling independent film festival. The project was featured prominently in a documentary titled Cinema Is Everywhere. The festival was repeated in 2011.[53][54] In September 2009, Swinton joined a petition of Hollywood stars in support of Roman Polanski, and calling for his release from custody after he was detained in relation to his 1977 charge for drugging and raping a 13-year-old girl.[55]

In 2012, Swinton appeared in Doug Aitken's SONG 1, an outdoor video installation created for the Hirshhorn Museum and Sculpture Garden in Washington, D.C. In November of the same year, she and Sandro Kopp made cameo appearances in episode 6 of the BBC comedy Getting On.

Swinton co-founded Drumduan Upper School in Findhorn, Scotland in 2013 with Ian Sutherland McCook. Swinton and McCook's both had children who attended the Moray Steiner School, whose students graduate at age 14. They founded Drumduan partly to allow their children to continue their Steiner educations with neither grading nor tests.[56] Swinton resigned as a director of Drumduan in April 2019.[57]

In February 2013, she played the part of David Bowie's wife in the promotional video for his song "The Stars (Are Out Tonight)", directed by Floria Sigismondi. In July 2013, Swinton appeared photographed in front of Moscow's St. Basil's Cathedral holding a rainbow flag in support of the country's LGBT community, reportedly releasing a statement: "In solidarity. From Russia with love."[58]

Although born in London and having attended various schools in England, Swinton describes her nationality as Scottish, citing her childhood, growing up in Scotland and Scottish aristocratic family background.[59] In 1997, Swinton gave birth to twins, Honor and Xavier Swinton Byrne, with her then-partner John Byrne, a Scottish artist and playwright.[60] She has lived in Scotland for over two decades, currently in Nairn, overlooking the Moray Firth in the Highland region of Scotland, with her children and partner Sandro Kopp, a German painter.[61] In 2018, she stated her support for Scottish independence.[59]

In a 2009 interview with The WIP, Swinton said, "I'm probably a woman. I don't know if I could ever really say that I was a girl – I was kind of a boy for a long time. I don't know, who knows? It changes." In her work, she has "played with the idea of transformative gender" and enjoys "walking the tightrope of identity, of sexual identity, of gender identity."[62]

In a 2021 interview with Vogue, Swinton mentioned that she identifies as queer. She was quoted as saying "I'm very clear that queer is actually, for me anyway, to do with sensibility. I always felt I was queer – I was just looking for my queer circus, and I found it. And having found it, it’s my world." She further stated that her collaborations with several creative visionaries helped her to find a sense of familiar belonging.[63]