At the beginning of his career he designed signature looks for Michael Jackson,[6] Madonna,[7] Grace Jones,[8] David Bowie and Diana Ross; and most notably Demi Moore's dress from the 1993 movie Indecent Proposal, which was once coined "the most famous dress of the 1990s". In 1992, he directed and designed the outfits for George Michael's "Too Funky" music video.[9] While also launching the perfume Angel, which became one of the best-selling perfumes of the 20th century.[10][11] Mugler's fall 1995 haute couture collection marking the 20th anniversary of his brand, was staged at the Cirque d’Hiver venue in Paris; and has been referred to as the "Woodstock of Fashion", for having over 300 designed looks, an elaborate set design, dozens of high profile supermodels and a performance from James Brown.[12][13]

In later years, Mugler's vintage designs saw a significant resurgence among celebrities, including Lady Gaga in the music video for "Telephone", and Cardi B who had an extensive friendship with Mugler, often wearing his vintage designs on red carpets and music videos, as well as mentioning the brand in the song "Wild Side".[14][15][16] He also designed costumes for Beyoncé's I Am... World Tour,[17][18] thus making his brand one of the most coveted luxury vintage brands for Generation Z consumers, according to Teen Vogue.[19] In 2019, he created a one-off design for Kim Kardashian to wear to the Met Gala.[20][21] That same year the Montreal Museum of Fine Arts (MMFA) launched the 'Thierry Mugler: Couturissime' exhibition dedicated to him.[22]

Mugler was born in Strasbourg. His passion led him to focus more on drawing than on school,[23][citation needed] and at the age of 9, he began to study classical dance.[24] By 14, he joined the ballet corps for the Rhin Opera (Opéra national du Rhin).[25]

In 1971, in his early twenties, Mugler began designing clothes for Karim,[27] already showing the broad-shouldered, 1940s-derived looks he would become famous for in later years.[28] At the age of 24, Mugler moved to Paris. He began designing clothes for Parisian boutique, Gudule. At 26, Mugler, who was working as a freelance designer, began to design for a variety of large ready-to-wear fashion houses in Paris, Milan, London and Barcelona.[26]

In 1973, Mugler created his first personal collection called "Café de Paris". The style of the collection was both sophisticated and urban. Melka Tréanton, a powerful fashion editor, helped to launch his career. In 1976, she asked him to show his work in Tokyo for an event organized by Shiseido.[29] In 1978, he opened his first Paris boutique at the Place des Victoires in the 1er Arrondissement and rapidly gained attention as among the most extreme of the Fall 1978 broad-shoulder brigade of designers, with a penchant for mid-20th-century sci-fi themes and exaggerated 1940s-50s-style glamour marked by sharply constructed tailoring.[30][31][32][33] At the same time, Mugler launched a fashion collection for men. He would continue into the following decade with his 1940s-style shoulders on 1950s-tailored suits[34] amid retrograde Wagnerian showmanship.[35]

During the 1980s and 1990s, Mugler became an internationally recognized designer, often grouped with Claude Montana and Azzedine Alaïa[36][37][38] but known especially for his shapely suits,[39] and his collections garnered much commercial success. Except for a couple of sedate salon presentations in the late eighties[40][41] (when he also reduced his shoulder padding),[42] his fashion shows were extravagant affairs held in arena-like environments[43][44] and the collections associated with them had themes,[45] sci-fi themes in the late seventies,[46] an Africa theme one season,[47] a vampire-devil theme the next,[48] and an aquatic theme the next.[49] At the request of the Chambre Syndicale de la Haute Couture, he completed his first haute couture collection in 1992.[50]

He designed the dresses of Viktor Lazlo for hosting Eurovision 1987 Throwback Thursday: 1987.

He created the black dress worn by Demi Moore in the 1993 movie, Indecent Proposal. 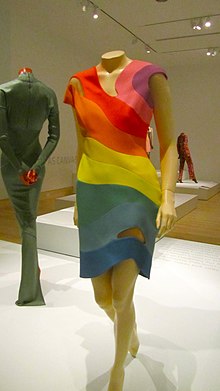 A dress by Mugler in an Indianapolis Museum of Art exhibit

Mugler published his first photography book in 1988, Thierry Mugler: Photographer.[51] This was followed by a monograph in 1999 entitled, Fashion Fetish Fantasy which assembles photos of his creations.[52]

Mugler also directed short films, advertising films and video clips. He regularly designed costumes for musical comedies, concerts, operas and the theatre (including Macbeth for the Comédie Française). He worked with Robert Altman and George Michael (he directed the video for Michael's "Too Funky" in 1992). He also directed the first advertising film for one of his fragrances, Alien.

Clarins has held the rights to his name Thierry Mugler since 1997.[53]

Clarins shuttered the ready-to-wear component of Mugler's brand in 2003, due to financial losses. It kept the perfume division open as it was profitable.[54] Mugler left fashion in 2002.[55] When asked about the subject, he said: "Fashion is beautiful, 3-D art on a human being. But it wasn't enough, which is why I went on to create in other ways. For me, it wasn't the right tool anymore. But perfume still interests me".[56]

In 2002, Mugler collaborated with the Cirque du Soleil. He directed "Extravaganza", one of the scenes of Zumanity, and also created all of the costumes and the identity of the characters in the show.

In 2008, the Mugler brand launched Thierry Mugler Beauty, a high-end line of cosmetics.

In September 2010, Nicola Formichetti was announced to be the Creative Director of the Thierry Mugler brand. He changed the brand name to MUGLER, removing the first name, and in January 2011, he launched the revival of the brand's menswear collection in collaboration with Romain Kremer.[58]

An April 2010 New York Times story discussed Mugler's cosmetic transformation. "[Mugler has] taken to calling himself Manfred and transformed his body...into what is apparently a 240-pound spectacle of muscle and nipple and tattoo..."[53]

With over two years of being the creative director of MUGLER, Formichetti announced in April 2013 that he and the fashion house will be parting ways. Formichetti left MUGLER to work for the Italian brand Diesel.[59]

In December 2013, House of Mugler announced David Koma as the artistic director.[60]

Despite retiring from his brand in 2003, he made the exception to design under his name "House of Mugler" for the Met Gala in 2019 and for Kim Kardashian. Getting his inspiration from Sophia Loren in the film Boy on a Dolphin, Mugler envisioned a wet California girl; hence the creation of the "wet couture dress".[62][63] 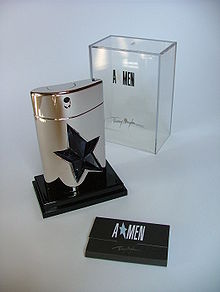 Mugler's first perfume appeared in 1992 and was called Angel. "Angel" contains a combination of praline and chocolate mixed with a strong accord of patchouli. It would be a part of a new fragrance type called gourmand. The Angel bottle, a design in the shape of a faceted star, was created by the Brosse Master Glassmakers. Fans of the fragrance include Diana Ross, Barbara Walters, Eva Mendes and Hillary Clinton.[64]

In 1996, Mugler followed up Angel with a male version named Angel Men or A*Men. This fragrance includes notes of caramel, coffee, vanilla, patchouli and honey.[65]

In 2005, Alien was created, the second major Thierry Mugler fragrance. Also in 2005, Mugler launched the "Thierry Mugler Perfume Workshops", which are open to the general public and led by specialists of the perfumery and oenology world.[66]

In 2006, Mugler completed a project for the launch of Tom Tykwer's film "Perfume". In collaboration with the IFF company, Mugler created a box set of fifteen compositions.[67]

Angel and Alien together produce about $280 million in sales annually.[69]

In 2010, the fragrance Womanity was released by the House of Mugler.[70]

Mugler was openly gay and a longtime bodybuilder.[71][72] Following his departure from fashion he became reclusive, went by his first name (Manfred) and began extensive bodybuilding. In 2019, he said "Thierry Mugler" was a label and a brand, and as such he wanted to move on to other things.[55]

Mugler had several accidents that changed his appearance. His nose was destroyed in a jeep crash. A motorcycle accident involved steel cables which saw Mugler have a piece of metal removed from his leg. In an interview with Interview magazine, Mugler stated, "I asked another surgeon if he could do some things to my chin, and then I was happy to get the bloody anesthesia. He actually took a piece of bone from my hip and put it on my chin, so I don’t have any plastic or silicone. It’s all bones. I wanted my face to represent progress, because after years of being a thin, charming dancer, I wanted to be a warrior. I’ve done so much in my life. I’ve fought so much. I’m a superhero, so it’s normal to have the face of one."[73]