This article is about the Netflix miniseries. For other uses, see Queen's Gambit (disambiguation).
2020 period drama television miniseries

The Queen's Gambit is an American coming-of-age period drama streaming television miniseries based on Walter Tevis's 1983 novel of the same name, created for Netflix by Scott Frank and Allan Scott, and written and directed by the former. Beginning mid-1950s and proceeding into the 1960s, the story is about an orphaned chess prodigy on her rise to becoming the world's greatest chess player while struggling with emotional problems and drug and alcohol dependency.

The Queen's Gambit was released on October 23, 2020. After four weeks of viewing it became Netflix's most-watched scripted miniseries.[1] It has received critical acclaim for Anya Taylor-Joy's performance as Beth Harmon as well as for the cinematography and production values. It has also received a positive response from the chess community and is credited with spurring a resurgence of public interest in the game.[2][3]

The Queen's Gambit follows the life of an orphan chess prodigy, Beth Harmon, during her quest to become the world's greatest chess player while struggling with emotional problems and drug and alcohol dependency. The series' title refers to a chess opening of the same name. The story begins in the mid-1950s and proceeds into the 1960s.[4]

The story begins in Lexington, Kentucky, where a nine-year-old Beth, having lost her mother in a car crash, is taken to an orphanage where she is taught chess by the building's custodian, Mr. Shaibel. As was common during the 1950s, the orphanage dispenses daily tranquilizer pills to the girls,[5][6] which turns into an addiction for Beth. She quickly becomes a strong chess player due to her visualization skills, which are enhanced by the tranquilizers. A few years later, Beth is adopted by Alma Wheatley and her husband from Lexington. As she adjusts to her new home, Beth enters a chess tournament and wins despite having no prior experience in competitive chess. She develops friendships with several people, including former Kentucky state champion Harry Beltik; gifted but arrogant chess prodigy Benny Watts and journalist, photographer and fellow player D.L. Townes. As Beth continues to win games and reaps the financial benefits of her success, she becomes more dependent on alcohol and other drugs.

On March 19, 2019, Netflix gave the production a series order consisting of six episodes. The series was written and directed by Scott Frank, who also created the series with Allan Scott.[8] The two also served as executive producers alongside William Horberg.[9] Scott had been involved in attempts to get the book on screen since 1992, when he purchased the screenplay rights from Walter Tevis' widow.[10]

The series was released on October 23, 2020 with seven episodes instead of the original six-episode order.[8]

Former World Chess Champion Garry Kasparov and chess coach Bruce Pandolfini acted as consultants.[11][12] Pandolfini had consulted with Tevis prior to the novel's publication some 38 years earlier,[13] coming up with the title "The Queen's Gambit".[10]

Pandolfini, together with consultants John Paul Atkinson and Iepe Rubingh came up with several hundred chess positions to be used for various situations in the script. Then Kasparov developed critical moments in the story, such as when a real 1998 game between grandmasters Arshak Petrosian and Vladimir Akopian was improved to showcase Beth Harmon's skill.[10]

Alongside the series order announcement, it was announced that Anya Taylor-Joy was set to star as the lead.[14] In January 2020, it was reported Moses Ingram had joined the cast of the series.[15] Upon the miniseries premiere date announcement, it was announced that Bill Camp, Thomas Brodie-Sangster, Harry Melling and Marielle Heller were cast in starring roles.[16][17]

Principal photography began in August 2019 in Cambridge, Ontario.[18] Filming also took place in Berlin,[19] including the Kino International, the Berlin Zoo, Humana and the Friedrichstadt-Palast.[20]

Production designer Uli Hanisch developed the series' sets to evoke the aesthetic of the 1950s and 1960s. Much of the series was filmed in Berlin because of how interiors found there could stand in for a large number of the show's locations, including Las Vegas, Cincinnati, Mexico City, Moscow, and Paris.[10][21][22]

The musical score was composed by Carlos Rafael Rivera.[23] Frank initially wanted the score to be piano-based only, but in the end decided with Rivera for a full orchestral score for more "instrumental depth and color". Rivera found scoring for chess a challenging task, having been warned by Frank that "music would be doing a lot of heavy lifting". He decided to reflect Beth's growth – both as a person and a chess player – by adding more and more instrumentation over time.[24]

On October 28, 2020, the series became the most watched series of the day on Netflix.[25][26] On November 23, 2020, it was announced that the series had been watched by 62 million households since its release (according to the way Netflix itself reports viewership),[27] becoming "Netflix's biggest scripted limited series to date."[1] Of this, Scott Frank stated "I am both delighted and dazed by the response"[28] while several outlets characterized it as an "unlikely success".[29][30] On November 30, 2020, it was reported that the series was on the top of the Nielsen's U.S. streaming rankings for the week of October 26 to November 1, 2020.[31] 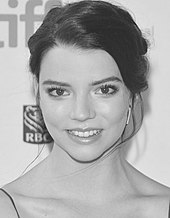 On review aggregator Rotten Tomatoes, The Queen's Gambit received an approval rating of 100% based on 74 reviews, with an average rating of 8.06/10. The website's critics consensus reads, "Its moves aren't always perfect, but between Anya Taylor-Joy's magnetic performance, incredibly realized period details, and emotionally intelligent writing, The Queen's Gambit is an absolute win."[32] Metacritic gave the series a weighted average score of 79 out of 100 based on 28 reviews, indicating "generally favorable reviews".[33]

In a column where she argues "So many lives would be different if we’d had 'The Queen’s Gambit' 50 years ago," culture critic Mary McNamara said, "I loved 'The Queen’s Gambit' so much, I watched the final episode three times."[34] Darren Franich of Entertainment Weekly gave the series a B and described the lead actress, "Taylor-Joy excels in the quiet moments, her eyelids narrowing as she decimates an opponent, her whole body physicalizing angry desperation when the game turns against her."[35] Variety's Caroline Framke wrote "The Queen's Gambit manages to personalize the game and its players thanks to clever storytelling and, in Anya Taylor-Joy, a lead actor so magnetic that when she stares down the camera lens, her flinty glare threatens to cut right through it."[36] Reviewing the miniseries for Rolling Stone, Alan Sepinwall gave it 3 out of 5 stars and said, "An aesthetically beautiful project with several superb performances, all in service to a story that starts to feel padded long before the end comes."[37]

Critics also frequently discussed the series' prominent theme of substance abuse. Phoebe Wong notes that "Interestingly though, unlike other works which study the self-destructive aspects of perfectionist obsession, mental health and substance abuse issues extend beyond the protagonist to other characters" in her review for The Tufts Daily. Her summary reads "Impressive in its own right, 'The Queen’s Gambit' adopts a fresh perspective by delving into chess’ intersections with substance abuse and gender discrimination".[38] Matt Miller writing for Esquire stated "The result is a pretty scary depiction of the stress of competitive chess in the 1960s."[5] When asked to comment on this aspect of the show, Nona Gaprindashvili – the world's first female chess grandmaster – stated "You have to be psychologically and physically strong, and have a drive for excellence."[39] On the other hand, Harper's Bazaar's Lilly Dancyger considered the "misrepresentation" of drug abuse to "nearly ruin the show" for her, explaining that the "self-delusion of addiction" should not be presented as fact.[40]

Bethonie Butler from the Washington Post, while praising the show overall, criticized the characterization of Jolene, the show's only major Black character, saying "(her) backstory and character development are so limited that she seems to exist merely to make Beth's life easier".[41]

Many aspects of the series' production values have been praised and discussed, including its location choices, interior design, and wardrobe.[30][28][42][43]

The series received praise from the chess community for its portrayal of the game and players.[44] In an interview with Vanity Fair, Woman Grandmaster Jennifer Shahade said that the series "completely nailed the chess accuracy".[45] In an article about the miniseries in The Times, British chess champion David Howell felt that the chess scenes were "well choreographed and realistic", while British Women's chess champion Jovanka Houska said, "I think it's a fantastic TV series ... [i]t conveys the emotion of chess really well."[46] Reigning chess world champion Magnus Carlsen gave it 5 out of 6 stars.[47]

Interest in the game

In November 2020, The Washington Post reported that the COVID-19 pandemic had already made the interest in chess surge when the success of The Queen's Gambit made it explode.[51] According to The Guardian, grandmaster Maurice Ashley has been inundated by messages from people – mainly women – enthused by the series: "the frenzy around it is crazy".[52] Sales of chess sets are reportedly up several hundred percent, to over a thousand percent, because of the series.[53] The gaming site Chess.com reports several million new users since the release of the series.[54]

Together with The Crown, costumes from The Queen's Gambit were put on display by the Brooklyn Museum as part of its virtual exhibition "The Queen and the Crown".[55][56]