The Invisible Man is a 2020 American science fiction horror film written and directed by Leigh Whannell, loosely based on the novel of the same name by H. G. Wells. It follows a woman who believes she is being stalked and gaslit by her abusive and wealthy ex-boyfriend—even after his apparent suicide—and ultimately deduces that he has acquired the ability to become invisible. The film stars Elisabeth Moss, Aldis Hodge, Storm Reid, Harriet Dyer, Michael Dorman, and Oliver Jackson-Cohen.

The development of a new film based on Wells's 1897 novel began as early as 2006. The project was revived as part of Universal's attempted Dark Universe in 2016, intended to consist of their classic monsters, with Johnny Depp attached to star in the title role. After The Mummy was released in 2017 to critical and financial failure, development was halted on all projects. In early 2019, the studio changed their plans from a serialized universe to films based on individualized story-telling and the project reentered development. Principal photography lasted from July to September 2019 in Sydney, Australia.

The Invisible Man was released in the United States on February 28, 2020, by Universal Pictures. The film received positive reviews from critics, with praise for Moss' performance, its inventive modernization of the novel's plot, and the combination of scares with "a smart narrative about how people can be manipulated and abused in harmful relationships".[5] The film grossed $142 million worldwide against a $7 million budget. Due to the COVID-19 pandemic closing theaters across the world, Universal announced the film would be made available for digital rental just three weeks after it was released theatrically.

Cecilia Kass is trapped in a violent and controlling relationship with wealthy optics engineer and businessman Adrian Griffin. One night, Cecilia drugs Adrian with diazepam and escapes his highly secured house with the assistance of her younger sister, Emily.

Cecilia hides out in the home of her friend Detective James Lanier and his teenage daughter, Sydney. Two weeks after Cecilia's escape, Adrian seemingly commits suicide and leaves her $5 million. His lawyer brother, Tom, handles the arrangements. Cecilia suspects another presence in the house after several strange events, but James assures her she is just traumatized and paranoid. During a job interview, she finds her work portfolio's contents removed, then faints. The doctor says high levels of diazepam were found in her system. In her bathroom, she finds the same bottle of diazepam with which she drugged Adrian, and dropped, during her escape.

Cecilia, accompanied by James, meets with Tom. She believes that Adrian faked his death and used his optics expertise to become invisible in order to torment her, but this idea is rebuffed. Later, Sydney is hit by an unseen force while comforting Cecilia, and she and James assume that Cecilia did it and is becoming unbalanced. Alone at the house, Cecilia tries various tactics to catch the figure. She finds Adrian's phone in the attic, on which she immediately receives a text saying "surprise". Cecilia dumps paint down the attic trap door and it coats a previously invisible figure. A violent struggle ensues but she escapes. She goes to Adrian's home to investigate his lab, where she finds an invisible bodysuit, confirming her suspicions. Right after she hides the suit in their former bedroom's closet, the invisible figure attacks again, so she flees and contacts Emily. The pair meet at a restaurant, where the invisible figure slits Emily's throat and places the knife in Cecilia's hand, framing her for murder.

While awaiting trial, Cecilia is remanded to a psychiatric hospital, where she learns she is pregnant. Tom offers to get her charges dropped if she agrees to "return to him" and raise the child, implying that Tom helped stage his brother's suicide. He reveals Adrian tampered with her birth control to impregnate her. Cecilia refuses the offer and steals a fountain pen from him. That night, she attempts to commit suicide to lure out the invisible figure. When the figure tries to stop her, she stabs him repeatedly with the pen, causing the suit to malfunction. The security team arrives, but the figure incapacitates them before fleeing the hospital, with Cecilia in pursuit. To protect her unborn child, the figure instead threatens to attack those she loves.

Cecilia races to James' house and finds the figure attacking him and Sydney. She shoots the figure to death, but when unmasked, she finds Tom in the suit. Police storm Adrian's house and find him alive, tied up and claiming that Tom held him prisoner. They conclude that Tom killed Emily, as well, but Cecilia believes that Adrian set his brother up as the fall guy for his crimes.

To get Adrian's confession, she meets him at his house secretly wearing a wire tap, while James listens in from a few blocks away. She agrees to mend their relationship, but only if he confesses to killing Emily. Adrian insists that Tom was responsible, but claims that the experience changed his outlook on life and how he treated her. After Adrian works the word "surprise" into a sentence while looking into her eyes, meaningfully, Cecilia excuses herself to use the restroom. Moments later, the security camera captures Adrian seemingly slitting his own throat. Cecilia returns and, apparently distraught, calls 911. Out of the camera's sight, however, she taunts a dying Adrian, revealing that she had used the spare bodysuit to kill him.

When James arrives, she confirms what the camera captured. He notices her carrying the suit, but allows her to leave.

Development of a new The Invisible Man film began as early as 2006 when David S. Goyer was hired to write the screenplay.[6] Goyer remained attached to the project as late as 2011, with little to no further development on the film.[7]

In February 2016, the project was revived with Johnny Depp cast as the titular character and Ed Solomon writing the screenplay.[8] It was revealed to be part of an intended cinematic universe featuring Universal Pictures' modern-day reboot of their classic monsters. The would-be film series was set to begin in 2017 with The Mummy, starring Tom Cruise, Sofia Boutella, and Russell Crowe, followed by a remake of The Bride of Frankenstein in 2019. An image released in May 2017 of Depp with Cruise, Boutella, Crowe, and Javier Bardem, who was cast to play Frankenstein's monster, announced this shared world as the Dark Universe. The Mummy director Alex Kurtzman stated that fans should expect at least one film per year from the series.[9] However, once The Mummy was released to negative critical reception and box office returns deemed by the studio as insufficient, changes were made to the Dark Universe to focus on individual storytelling and move away from the shared universe concept.[10]

In January 2019, Universal announced that all future movies on their horror characters would focus on standalone stories, avoiding inter-connectivity.[11] Successful horror film producer Jason Blum, founder of production company Blumhouse Productions,[12] had at various times publicly expressed his interest in reviving and working on future installments within the Dark Universe films. The Invisible Man was set to be written and directed by Leigh Whannell, and produced by Blum, but would not star Depp as previously reported.[13]

On February 22, 2020, during an interview with Cinemablend's ReelBlend Podcast, Whannell stated that the film was never planned to be part of any cinematic universe, including the Dark Universe.[14] He stated,

It was weird, this film came about in a really random way. It wasn't like I was plugged into some kind of worldbuilding. I had just finished Upgrade, they called me in for a meeting with some of these Universal and Blumhouse execs… I go to this meeting, and they didn't really talk about Upgrade. I mean, they said they liked it and they moved on. So, I'm sitting on this couch thinking, "What am I here for? What is this meeting about?" And they started talking about The Invisible Man.[14]

The Invisible Man was theatrically released in the United States on February 28, 2020, by Universal Pictures.[22] It was originally scheduled for release on March 13, 2020, but in August 2019 was moved up two weeks.[23]

On March 16, 2020, Universal Pictures announced that the film would be released digitally in the United States and Canada through Premium VOD on March 20, just three weeks after the film's theatrical debut and before the end of the usual 90-day theatrical run.[24] This was because of movie theater closures that started in mid March because of the COVID-19 pandemic restrictions. Other films distributed by the studio, such as The Hunt and Trolls World Tour, were also released earlier than expected for the same reason.[25][26]

The Invisible Man grossed $70.4 million in the United States and Canada, and $72.7 million in other countries, for a worldwide total of $143.1 million, against a production budget of $7 million.[3]

In the United States and Canada, the film was projected to gross $24–30 million from 3,610 theaters in its opening weekend.[5] It made $9.9 million on its first day, including $1.65 million from Thursday night previews. The film went on to debut to $28.2 million, topping the box office.[30] The film made $15.1 million in its second weekend (dropping 46%) and then $5.9 million in its third weekend.[31] In the film's fourth weekend, due to the mass theater closures around the country caused by the COVID-19 pandemic, it made $64,000 from 111 locations, mostly drive-in theaters.[32] 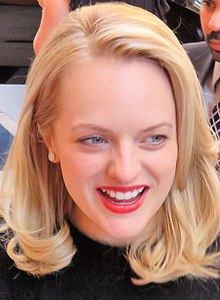 Elisabeth Moss received praise from critics for her performance in the film.

Review aggregator website Rotten Tomatoes reported that 91% of 406 reviews of the film were positive with an average rating of 7.7/10. The site's critics consensus reads: "Smart, well-acted, and above all scary, The Invisible Man proves that sometimes, the classic source material for a fresh reboot can be hiding in plain sight."[36] Metacritic assigned a weighted average score of 72 out of 100, based on 58 critics, indicating "generally favorable reviews".[37] Audiences polled by CinemaScore gave the film an average grade of "B+" on an A+ to F scale, and PostTrak reported it received an overall positive score of 76% and an average four out of five stars, with 53% of people they polled saying they would definitely recommend the film.[30]

Manohla Dargis of The New York Times wrote that Moss's performance "gives the movie its emotional stakes," adding, "while her agony can be unnerving, it is even more shivery when her weeping stops and this horror-movie damsel in distress becomes a threat."[38] Writing for The A.V. Club, Jesse Hassenger gave the film a "B+", also praising Moss's performance and the film's centering of her character's experience;[39] the publication followed up with a video review from senior writer Katie Rife and Ignatiy Vishnevetsky, who also gave a positive review, for the aesthetic and filmmaking of Blumhouse Productions and Moss's performance.[40] Alison Willmore of Vulture commented about the effectiveness of Moss's facial expressions, and said that she "has established herself as an empress of the onscreen breakdown, our lady of ruined eye makeup".[41] Patrick Cavanaugh of ComicBook.com gave the film four out of five stars, and wrote that Whannell's film is "an experience that is both effective as a full-blown horror film and as a chilling reminder of the abuse one can suffer from a supposed loved one."[42]

Conversely, Nicholas Barber from BBC gave the film two out of five stars, opining that "the latest remake of the HG Wells tale offers a timely feminist spin – but it's lacking in thrills." He criticized the film's vagueness, concluding, "at a time when small-scale horror movies can be as stunning as A Quiet Place and Get Out, a film as perfunctory as The Invisible Man feels insulting."[43] Jake Coyle of the Associated Press was also less than positive, describing it as " a bracingly modern #MeToo allegory that, despite its brutal craft, rings hollow."[44]