The Father is a 2020 drama film co-written and directed by Florian Zeller, in his directorial debut; he co-wrote it with fellow playwright Christopher Hampton based on Zeller's 2012 play Le Père. A French-British co-production, the film stars Anthony Hopkins, Olivia Colman, Mark Gatiss, Imogen Poots, Rufus Sewell, and Olivia Williams, and follows an aging Welshman who must deal with his progressing dementia. It is the second adaptation of the play after the 2015 film Floride.

The Father had its world premiere at the Sundance Film Festival on 27 January 2020, and was released in France on 26 May 2021 by UGC Distribution and in the United Kingdom on 11 June 2021 by Lionsgate. The film was acclaimed by critics, who lauded the performances of Hopkins and Colman, as well as the production values and its portrayal of dementia. At the 93rd Academy Awards, Hopkins won Best Actor and Zeller and Hampton won Best Adapted Screenplay; the film received six nominations in total, including Best Picture and Best Supporting Actress (Colman).[5] At the 78th Golden Globe Awards, the film received four nominations, including Best Motion Picture – Drama, and it received six nominations at the 74th British Academy Film Awards, winning Best Actor (Hopkins) and Best Adapted Screenplay. In addition, Hopkins and Colman were nominated for Outstanding Leading Actor and Outstanding Supporting Actress respectively at the 27th Screen Actors Guild Awards.

Anne visits her father Anthony in his flat after he becomes belligerent with his recent caretaker. He has dementia and constantly forgets important life events and where things are around his flat, including his watch. He tells Anne he believes his caretaker stole his watch and that he will never move out of his flat. She tells Anthony she is moving to Paris to be with a man, which confuses Anthony since he doesn't recall any men in her life since the end of her marriage to James. Anne says that if he keeps refusing to have a carer, she will have to move him into a nursing home.

The next day, Anthony sees an unknown man, Paul, and is confused by him living in his flat. Paul states that Anthony lives with him and Anne. Anne returns for dinner and appears as a different woman, confusing Anthony again. Anne schedules an interview with a new caretaker, Laura. Anthony tells Laura he was a professional dancer and doesn't need any assistance. Anthony later says Laura reminds him of his other daughter Lucy, whom he hasn't talked to for months for reasons he is unaware of.

Anthony is taken to a doctor and asked about his memory. He claims he has no memory problems. Later, he tells Laura how proud he is of Lucy, a painter. She tells him she is sorry about Lucy's accident, which Anthony is unaware of. Over the course of the film, it is revealed that Anthony has really been living in Anne and Paul's flat for years, but believes he still lives in his own flat. After Anne comes home, she and Paul have an argument over a cancelled holiday to Italy due to Anthony's earlier behaviour towards the caretaker, and about Anne's sacrifices for her father. Paul asks Anthony how long he plans to stay in their flat and annoy everyone, and slaps him.

Anthony wakes up and walks out of the flat, finding himself in a hospital hallway. He remembers Lucy lying in a hospital bed with blood on her face. He then wakes up in a completely different bedroom, in a nursing home. His nurse, Catherine, informs him Anne has moved to Paris with Paul and visits on occasional weekends. Another nurse, Bill, also visits. Anthony has an emotional breakdown over his inability to understand the world any more, and Anne's disappearance. He says he wants his mother and that he is "losing his leaves, the branches, the wind and the rain". Catherine comforts him and tells him she'll take him out to the park later.

The film ends with the camera panning to a vista of trees outside his window.

It was announced in May 2019 that Florian Zeller was to direct a screenplay with Christopher Hampton based on his play. Anthony Hopkins and Olivia Colman were cast in the film. Olivia Williams, Rufus Sewell, Imogen Poots and Mark Gatiss joined later that month, with filming beginning on 13 May.[6] Filming locations included West London Film Studios, and Hayes, Hillingdon.[7][8]

The Father had its world premiere at the Sundance Film Festival on 27 January 2020.[9] Prior to this, Sony Pictures Classics and Lionsgate acquired U.S. and U.K. distribution rights to the film, respectively.[10][11] It also screened at the Toronto International Film Festival on 14 September 2020[12] and at the AFI Fest in October 2020.[13]

The film is scheduled to be released in India on 23 April 2021 and in the United Kingdom on 11 June 2021,[14] delayed from earlier release dates of 8 January and 12 March in response to lockdowns as result of a second-wave of the COVID-19 pandemic.[15] In the United States, the film began a limited release in New York City and Los Angeles on 26 February, before expanding on 12 March and then being available on premium video on demand starting 26 March,[16] after originally being scheduled to be released on 18 December 2020.[17] 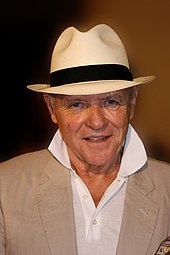 Anthony Hopkins's performance garnered universal critical acclaim, with some citing it as the finest of his career. He won his second Academy Award for Best Actor at age 83, becoming the oldest Best Actor winner.

Review aggregator Rotten Tomatoes reports that 98% of 255 critic reviews were positive, with an average rating of 8.7/10. The website's critics consensus reads: "Led by stellar performances and artfully helmed by writer-director Florian Zeller, The Father presents a devastatingly empathetic portrayal of dementia."[22] Metacritic assigned it a weighted average score of 88 out of 100 based on 49 critics, indicating "universal acclaim".[23] According to PostTrak, 84% of audience members gave the film a positive score, with 54% saying they would definitely recommend it.[18]

Writing for Variety, Owen Gleiberman said "The Father does something that few movies about mental deterioration in old age have brought off in quite this way, or this fully. It places us in the mind of someone losing his mind — and it does so by revealing that mind to be a place of seemingly rational and coherent experience."[24] For The Guardian, Benjamin Lee wrote of Hopkins' performance: "It's astounding, heartbreaking work, watching him try to rationally explain to himself and those around him what he's experiencing. In some of the film's most quietly upsetting moments, his world has shifted yet again but he remains silent, knowing that any attempt to question what he's woken up to will only fall on deaf ears. Hopkins runs the full gamut from fury to outrage to upset and never once does it feel like a constructed character bit, despite our association with him as an actor with a storied career."[25]

Todd McCarthy of The Hollywood Reporter wrote: "The best film about the wages of aging since Amour eight years ago, The Father takes a bracingly insightful, subtle and nuanced look at encroaching dementia and the toll it takes on those in close proximity to the afflicted. Fronted by a stupendous performance from Anthony Hopkins as a proud [man] in denial of his condition, this penetrating work marks an outstanding directorial debut by the play's French author Florian Zeller."[26]

Writing for Indiewire, David Ehrlich said: "Zeller adapts his award-winning play of the same name with steely vision and remarkable confidence, as the writer-director makes use of the camera like he’s been standing behind one for his entire life. (...) In Zeller’s hands, what appears to be a conventional-seeming portrait of an unmoored old man as he rages against his daughter and caretaker slowly reveals itself to be the brilliant study of a mind at sea, and of the indescribable pain of watching someone drown."[27]

Writing for The New York Times, Jeannette Catsoulis said The Father is "stupendously effective and profoundly upsetting" and described it as a "majestic depiction of things falling away".[28] The Guardian's Anne Billson ranked Hopkins' performance in the film as the best in his career.[29]