In 2012, Antetokounmpo began his professional level career with Filathlitikos, of the Greek third division, after previously playing with the club in the Greek minor leagues. During the 2012–13 Greek 2nd Division season with Filathlitikos, he averaged 12.2 points, 4.9 rebounds, 1.0 assists, 1.1 steals, and 1.0 blocks per game.[3] He was selected by the coaches to play in the 2013 Greek All-Star Game as a special participant, even though he was not actually selected as an all-star,[4] and competed in the slam dunk contest as players from the second division are eligible to compete in the dunk competition.

After originally declaring for the 2013 NBA draft, he withdrew from the draft on June 17, 2013, along with 17 other players, on the day of the withdrawal deadline.[5] He had originally entered the draft with his younger brother Giannis. 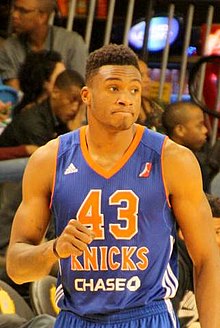 Antetokounmpo with the Westchester Knicks in January 2016

In July 2015, Antetokounmpo re-joined the New York Knicks for the 2015 NBA Summer League where he averaged 6.4 points, 1.8 rebounds and 1.2 blocks in five games. On August 7, 2015, he signed with the Knicks,[14] only to be waived by the team on October 23, after appearing in three preseason games.[15] Later that month, he returned to the Westchester Knicks.[16][17] On January 29, 2016, he signed a 10-day contract with the New York Knicks.[18] He made his NBA debut later that night, scoring two points in two minutes of action against the Phoenix Suns.[19] On February 8, New York decided not to renew his contract,[20] and the following day, he returned to Westchester.[21]

On August 8, 2016, Antetokounmpo signed with MoraBanc Andorra of the Liga ACB.[22] He played an instrumental role as his team qualified for the first time in 22 years to the ACB playoffs, where they were eliminated in the quarterfinals by Real Madrid. He averaged 7.3 points and 3.8 rebounds per game during regular season, before raising his contribution to 12.7 points and 4.7 rebounds in the playoffs. The Spanish basketball magazine Gigantes del Basket awarded Antetokounmpo with their 2017 "Top 5 Trophy", which goes to the Liga ACB "Most Spectacular Player of the Year".[23][24]

On July 11, 2017, Antetokounmpo returned to Greece and signed a two-year deal with the EuroLeague giants Panathinaikos, of Greece's top-tier level Greek Basket League.[25] He was named the MVP of the 2018 Greek All-Star Game. In June 2018, Antetokounmpo won the Greek League championship with Panathinaikos, after beating Olympiacos in the league's finals, after a five-game series.[26] He was named the Greek League's Most Spectacular Player, of the 2017–18 season. On February 17, 2019, he won the Greek Cup title after Panathinaikos defeated PAOK (79:73) in the big final, held in Heraklion Indoor Sports Arena, Crete. On June 14, 2019, Antetokounmpo was crowned Greek Basket League champion with Panathinaikos, for a second year in a row, after they swept Promitheas in the league finals.[27]

On July 16, 2019, Antetokounmpo signed with the Milwaukee Bucks, reuniting with his brother Giannis, also becoming the second pair of brothers on the Bucks roster, after Brook and Robin Lopez.[28] He saw his first action in the closing minutes of a game against the Orlando Magic on November 1. Along with two assists and a rebound, the elder Antetokounmpo scored on a spectacular dunk. On November 13, 2019, The Milwaukee Bucks announced Antetokounmpo was sent to the Wisconsin Herd of the NBA G League. He was recalled two days later after one game with the Herd.

On July 20, 2021, Antetokounmpo won the 2021 NBA Finals with the Milwaukee Bucks. Antetokounmpo had missed Games 5 and 6 of the Finals after entering the NBA's COVID-19 protocol.[30]

On May 3, 2016, Antetokounmpo was named in the senior Nigerian men's national team training camp preliminary list for the 2016 Rio Olympics.[31] He declined the offer, choosing instead to play with the senior Greek national team.[32] He was selected to Greece's 12-man roster for the 2016 Turin FIBA World Olympic Qualifying Tournament.[33] He next played with Greece at the EuroBasket 2017. He also played with Greece at the 2019 FIBA World Cup qualification.[34] 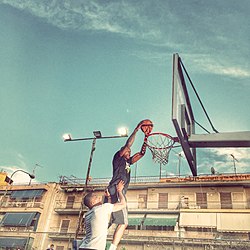 Giannis and Thanasis playing basketball at a local court in Sepolia, Athens

Antetokounmpo was born in Athens, Greece, to Nigerian parents, and grew up in the Athens neighborhood of Sepolia.[35] His late father, Charles, was a former Nigerian soccer player, while his mother, Veronica, is a former high-jumper.[36] His parents are from different Nigerian ethnic groups—Charles was Yoruba, and Veronica is Igbo.[37] He officially gained Greek citizenship on May 9, 2013,[38] with the official legal spelling of his last name being Antetokounmpo.[39] His oldest brother, Francis, is a professional soccer player.

His younger brother, Giannis Antetokounmpo (b. 1994), was drafted 15th overall in the 2013 NBA draft by the Milwaukee Bucks.[40] With Giannis known as "The Greek Freak", Thanasis was sometimes referred to as "Greek Freak 2",[41][42] although his own nickname was "The Greek Streak".[43] In addition, he's also the older brother of Kostas and Alexis, both of whom also trained with Filathlitikos. Antetokounmpo's mother gave each of her four sons born in Greece, both a Greek and a Nigerian name.[44] Kostas is a member of the NBA's Los Angeles Lakers, while Alexis graduated from Dominican High School.

In 2017, during the EuroBasket tournament in Helsinki, in which the senior Greek national team was competing, he was nicknamed "The Elevator" by Greek basketball sportscaster Vangelis Ioannou, as well as by his younger brother, Giannis. This nickname was given to him due to his superb jumping ability.[45]