Ted Lasso is an American sports comedy-drama streaming television series developed by Jason Sudeikis, Bill Lawrence, Brendan Hunt, and Joe Kelly, based on a character of the same name that Sudeikis first portrayed in a series of promos for NBC Sports' coverage of the Premier League.[2] The series follows Ted Lasso, an American college football coach who is hired to coach an English soccer team in an attempt by its owner to spite her ex-husband. Lasso tries to win over the skeptical English market with his folksy, optimistic demeanor while dealing with his inexperience in the sport.

Ted Lasso has received critical acclaim, with particular praise for its performances, writing, and uplifting tone and themes. Among other accolades, it has been nominated for 20 Primetime Emmy Awards, becoming the most nominated freshman comedy in Emmy Award history[8], with Sudeikis, Hannah Waddingham, and Brett Goldstein winning for their performances, and the series winning the 2021 Primetime Emmy Award for Outstanding Comedy Series. Additionally, Sudeikis won the Golden Globe Award for Best Actor – Television Series Musical or Comedy and the Screen Actors Guild Award for Outstanding Performance by a Male Actor in a Comedy Series.

American Ted Lasso, a college football coach, is unexpectedly recruited to coach an English Premier League team, AFC Richmond, despite having no experience in soccer.

The series was commissioned in October 2019 by Apple TV+, with Jason Sudeikis reprising his role as Lasso. Sudeikis originally portrayed the titular character in 2013 as part of a series of television commercials for NBC Sports promoting their coverage of the Premier League, in which Lasso is depicted as the new head coach of Tottenham Hotspur F.C.[12] Television producer and Scrubs creator Bill Lawrence was brought in to work on a television series based around the character in 2017.[13] The series is co-owned by Warner Bros. Television, where Lawrence's production company Doozer is based, and which controls linear distribution rights to the series, and NBC subsidiary Universal Television, which is a "passive partner".[1]

On August 19, 2020, Apple TV+ renewed the series for a 10-episode second season.[4] It was later confirmed that the second season had been expanded to 12 episodes.[5] On October 28, 2020, the series was renewed for a third season.[7] On an episode of the Scrubs rewatch podcast Fake Doctors, Real Friends with Zach + Donald, Lawrence indicated that Ted Lasso will likely be a "three-season show" due to the limited availability of Sudeikis beyond the third season. Lawrence went on to say that the story has a planned resolution within those three seasons.[14]

Actors in the series Brett Goldstein and Brendan Hunt also joined the writing team along with Sudeikis as the second and third members of the main cast to do so.[15] While Hunt and Sudeikis were part of both the cast and writing team from the start, Goldstein was initially a writer and story editor. It was only after sending a video audition of some already written Roy Kent scenes to the showrunner, Bill Lawrence, that lead to Goldstein's casting.[16]

Theo Park serves as the casting director for the series.[19] Nick Mohammed, who portrays Nate Shelley, originally auditioned for the role of Leslie Higgins, which in the end went to Jeremy Swift.[19] Park pushed for Phil Dunster to play the role of Jamie Tartt, even though the character was originally supposed to be from Latin America and portrayed by Cristo Fernández.[19] The character of Sam Obisanya was originally going to have been of Ghanian heritage, but the character was changed after Toheeb Jimoh's casting.[20] In March 2021, Sarah Niles was cast as Dr. Sharon Fieldstone, a sports psychologist for AFC Richmond in a main capacity for the second season.[9] About Niles' casting, Park said that "It was really important with that role that [Niles] had a real sense of security and almost completely unflappable."[19] Casting for season three is set to begin near the end of 2021.[19] Kiki May portrays Nora, Sassy's teenaged daughter, in a recurring capacity in the second season.[10]

Production began on the second season in January 2021.[21] In March 2021, Jason Sudeikis and Hannah Waddingham were spotted filming outside a pub in London.[22] Filming wrapped for the second season on June 4, 2021.[23] Filming for the third season is set to take place between January and June 2022.[19]

In March 2021, Bill Lawrence revealed that official Ted Lasso merchandise would be for sale ahead of the season two premiere.[24] The merchandise, including football jerseys, became available in June 2021.[25] 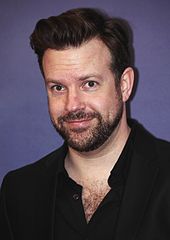 Jason Sudeikis' performance as Ted Lasso has been widely praised by critics.

Review aggregator Rotten Tomatoes reported an approval rating of 91% based on 69 reviews, with an average rating of 8.2/10. The website's critics consensus reads, "Warm and winsome, if not particularly hilarious, Ted Lasso fleshes out its promo premise with unrelenting optimism and a charming turn from Jason Sudeikis."[26] Metacritic gave the first season a weighted average score of 71 out of 100 based on 21 reviews, indicating "generally favorable reviews".[27]

Kristen Baldwin of Entertainment Weekly gave the series an A− and wrote, "There's nothing groundbreaking about the way Ted Lasso's story beats play out, but the show—a mix of workplace antics, sentimental sports inspo, and soapy romance—is undeniably winning."[28] Reviewing the series for Rolling Stone, Alan Sepinwall described the series as "extremely likable throughout, but it's more a hypothetical comedy than an actual one. There are long stretches where Juno Temple is the only actor even trying to sell what few jokes are in the scripts." and gave a rating of 3/5.[29] Writing for The Guardian, Benjamin Lee gave it 2/5, describing it as "a show that isn't unwatchably bad but isn't really much of anything", and suggesting that some of its humor was "rooted in some questionable and uneasy stereotypes".[30]

As the season went on, critical appreciation for the show increased. After the eighth episode aired, Caroline Framke of Variety published a review with the headline "For Your Reconsideration: Ted Lasso". She went on to say, "Above all odds, Ted Lasso chipped away at my skepticism until there was none left—just like the character himself does to everyone he meets", adding, "At a time when just about everything feels catastrophic, there's something undeniably satisfying about spending some time with good people who are just trying to be the best they can, on and off the field."[31] Keri Lumm of Paste Magazine said, after the airing of the penultimate episode, "Ted Lasso is the wholesome American hero we need", going on to say "... the landscape of television has felt kind of gloomy, so imagine my surprise when I turned on the TV to Ted Lasso and felt a swelling of a now unfamiliar emotion—hope."[32] And after the finale aired, Lea Palmieri from Decider said, "I was a few weeks late to the game after the half-hour comedy premiered ... but I saw the buzz building, specifically from people whose recommendations I trust, and so I gave it a go. Now? Well, I simply can't shut up about it and here we are." She goes on to say, "Every step of the way, Ted Lasso proves to be comforting and entertaining and somehow both a distraction and a reminder that kindness is out there, not just on this fictional show, not just across the pond, but deep in the heart of America too."[33]

The series has drawn comparisons to the takeover of Chester City F.C. by American gridiron coach Terry Smith in 1999, who subsequently installed himself as first-team manager.[34]

The second season of Ted Lasso was met with critical acclaim. Rotten Tomatoes reported an approval rating of 98% based on 87 reviews, with an average rating of 8.5/10. The website's critics consensus reads, "As comforting as a buttery biscuit from a friend, Ted Lasso's sophomore season is a feel-good triumph that plays into the show's strengths while giving its supporting team more time on the pitch."[35] Metacritic gave the second season a weighted average score of 86 out of 100 based on 34 reviews, indicating "universal acclaim".[36]