Roberts was born Victoria Leigh Blum in 1955 (or 1949)[1] in the Bronx, New York City, to Oscar Blum and his wife Dorothy (née Smith).[2] Oscar Maximilian Blum (1912-1971) was born in New York City.[3][4] Oscar's father, Theodor Blum (1883-1962),[5] has been called "The most outstanding oral surgeon in America" for his pioneering work in local anesthesia and the use of x-rays in dental care.[6] Theodor was born in Vienna, Austria and immigrated to New York in 1904.[3] Oscar earned a bachelor's degree from Cornell University in 1934 and was a first year student in the medical college there.[7] In 1940 Tanya's father was working as an assistant manager for a music publishing house in New York City.[8] He married in 1945 in Weymouth, England, Dorothy Leigh Smith from Oldham, England.[9][10] At age 22 Dorothy arrived in New York City in April, 1945.[11] In 1948 Dorothy returned to New York from a trip to England with Tanya's two-year-old sister, Barbara.[12] Tanya's father was of Jewish descent and her mother was of English or Irish descent.[13][14][1] It has also been reported that her father was of Irish descent and her mother was Jewish.[15] She had one older sister, Barbara.[16] In 1956 Tanya and her sister lived in Scarsdale, New York in a home built in 1950, still standing 70 years later.[17][18] Tanya's parents purchased the Scarsdale home new in March 1951 and sold it in January 1958 to buy a property in Greenburgh, NY that same month.[19] Tanya's father sold the Greenburgh property on his own in July 1961.[20] Oscar Blum supported the family on a modest income, working as a fountain pen salesman in Manhattan.[21][22] The sisters were raised in the central Bronx.[23]

She relocated from New York with her mother to live in Mississauga, Ontario, for several years, where she started forming a photo portfolio and laying plans for a modeling career. At age 15, she left high school and lived for a while hitchhiking across the United States. She eventually returned to New York City and became a fashion and cover model. After meeting psychology student Barry Roberts (while waiting in line for a movie), she proposed to him in a subway station and they were soon married.[22] While Barry pursued a career as a screenwriter, she began to study at the Actors Studio with Lee Strasberg and Uta Hagen under the name Tanya Roberts.[13]

Roberts began her career as a model in TV ads for Excedrin, Ultra Brite, Clairol, and Cool Ray sunglasses.[21] She played serious roles in the off-Broadway productions Picnic and Antigone.[13] She also supported herself as an Arthur Murray dance instructor. Her film debut was in The Last Victim (1975).[24][25] This was followed by the comedy The Yum-Yum Girls (1976).[25] In 1977, as her husband was securing his own screenwriting career, the couple moved to Hollywood. There she was cast in The Private Files of J. Edgar Hoover (1977)[2] and the following year, participated in the drama Fingers.[25] In 1979 Roberts appeared in the cult movie Tourist Trap,[26] Racquet,[24][25] and California Dreaming.[25] Roberts was featured in several television pilots which were not picked up: Zuma Beach (a 1978 comedy),[25] Pleasure Cove (1979),[13] and Waikiki (1980).[13]

In the summer of 1980, Roberts was chosen from some 2,000 candidates to replace Shelley Hack in the fifth season of the detective television series Charlie's Angels.[21][24] Roberts played Julie Rogers, a streetwise fighter who used her fists more than her gun. Producers hoped Roberts's presence would revitalize the series's declining ratings and regenerate media interest in the series. Before the season's premiere, Roberts was featured on the cover of People magazine with a headline asking if Roberts would be able to save the declining series from cancellation.[27] Despite the hype of Roberts's debut in November 1980, the series continually drew dismal ratings and was cancelled in June 1981.[28] 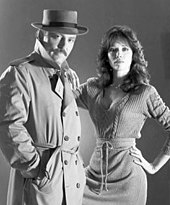 Stacy Keach and Tanya Roberts in 1983

Roberts played Kiri, a slave rescued by protagonist Dar (Marc Singer) in the adventure fantasy film The Beastmaster (1982),[21][13] which became a cult film.[15][24][25][26] She was featured in a nude pictorial in Playboy to help promote the movie,[2] appearing on that issue's October 1982 cover.[13] In 1983, Roberts filmed the Italian-made adventure fantasy film Hearts and Armour[29] (also known as Paladini-storia d'armi e d'amori and Paladins — The Story of Love and Arms), based on the medieval novel Orlando Furioso.

She portrayed Velda, the secretary to private detective Mike Hammer, in the television movie Murder Me, Murder You (1983),[21][30] based on crime novelist Mickey Spillane's iconic Mike Hammer private detective series. The two-part pilot spawned the syndicated television series Mickey Spillane's Mike Hammer.[30] She declined to continue the role in the Mike Hammer series to work on her next project, the 1984 fantasy movie Sheena: Queen of the Jungle, in which she played the main character.[21][24][26][15][25][13] The movie was a box-office failure, and garnered her a nomination for "Worst Actress" at the Razzie Awards.[31] The critic Pauline Kael, in a more-balanced review for the The New Yorker, describes her as having "a staring, comic-book opaqueness. ... She's a walking, talking icon".[2]

In 1998, Roberts took the role of Midge Pinciotti on the television sitcom That '70s Show.[24][26][25] In her obituary in The Guardian, Ryan Gilbey praises "[h]er knowing performance" in this role, "slow on the uptake but growing dissatisfied with her life as a housewife".[2] She left the series after the 3rd season in 2001, because her husband had become terminally ill,[2] returning for a few special guest appearances in the 6th and 7th seasons in 2004. She retired from acting in 2005.[citation needed]

Roberts was married to Barry Roberts from 1974 until his death in 2006.[34] They had no children.[35] Roberts lived in Hollywood Hills, California.[35] Some time after his death, she became the partner of Lance O'Brien.[2] Her sister, Barbara Chase, was married to Timothy Leary.[21]

Roberts wrote the foreword to the book The Q Guide to Charlie's Angels (2008).[36] She was described by her publicist as an animal rights activist.[37] During the COVID-19 pandemic, she maintained an active social media presence by hosting video chats on Facebook and Zoom.[38]

On December 24, 2020, Roberts fell out of bed and could not get up, following intestinal pain and breathing difficulties that began on a hike the day before.[39] She was taken to Cedars-Sinai Hospital in Los Angeles and was later placed on a ventilator.[40][24][26] It was initially reported that Roberts died on January 3, 2021,[41] after her partner, Lance O'Brien, told her manager that he had visited her in the hospital and "said goodbye".[42] O'Brien later clarified that this was an end-of-life visit; he had not been permitted to see her during her hospitalization due to the COVID-19 pandemic, but was invited to return when Roberts was taken off life support.[39] She was critically ill from a urinary tract infection that entered her organs and bloodstream, leading to a blood infection made worse due to Roberts's history of hepatitis C.[42][39] After the premature reports, O'Brien was informed by the hospital that she died in the evening of January 4, and confirmed this to the media on January 5.[42][21][43]