Survivor Series is a professional wrestling event, produced annually since 1987 by WWE, the world's largest professional wrestling promotion. It is the second longest running pay-per-view (PPV) event in history, behind WWE's flagship event, WrestleMania. In addition to PPV, the event has aired on the WWE Network since 2014 and Peacock since 2021. It is also considered one of the company's five biggest PPV events of the year, along with WrestleMania, Royal Rumble, SummerSlam, and Money in the Bank, referred to as the "Big Five".

The event is traditionally characterized by having Survivor Series matches, which are tag team elimination matches that typically features teams of four or five wrestlers against each other. Stipulations have sometimes been attached to these matches, such as members of the losing team being fired. Since WWE reintroduced the brand extension in 2016, Survivor Series has centered around competition between wrestlers from the Raw and SmackDown brands for brand supremacy; NXT was also involved in the competition in 2019. 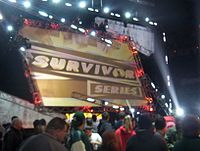 With the return of the brand split in 2016, Survivor Series has since focused on direct competition between the Raw and SmackDown brands; similar to the 2005 event, and the former Bragging Rights events that were held for two years during the first brand split.[2][3][4] In addition to traditional Survivor Series elimination matches featuring Raw's talent against SmackDown's (2016 and 2018 also featured matches with the brands' tag teams going against each other), there have been interpromotional matches that pit the brands' champions against each other in non-title matches.

The 2016, 2017, and 2018 events were contested between Raw and SmackDown; with Raw winning the competition in 2017 (4–3) and 2018 (6–0). The 2019 event saw the addition of the NXT brand, WWE's developmental territory, and in turn featured the first three-way Survivor Series elimination matches for men and women. NXT subsequently won that year's competition with a 4–2–1 victory.[5] NXT would not compete at the 2020 event due to the COVID-19 pandemic. Outbreaks of the virus had occurred at both of NXT's home arenas, Full Sail University and the WWE Performance Center, prompting WWE to exclude NXT wrestlers from the event to avoid potential transmission of the virus to members of the Raw and SmackDown rosters.[6] Raw would win that year's competition with a 4–3 victory over SmackDown.[7] However, the 2021 edition also did not include NXT as the brand was partially reverted to its status WWE's developmental brand in September of that year.

The event is traditionally characterized by having tag-team elimination matches, pitting teams of four or five wrestlers against each other. These matches are generally referred to as "Survivor Series matches." The WWF had several elimination tag-team matches earlier in 1987, albeit with three-man teams and the feuds loosely related. In an early break from the norm, the 1992 event had only one tag team elimination match. The 1997 event saw the Montreal Screwjob, while the 1998 event was the first without any elimination tag team matches, instead focusing on an elimination tournament for the WWF World Heavyweight Championship. The 2002 Survivor Series is notable for the debut of the Elimination Chamber match.