Sueo Ōe (大江 季雄, Ōe Sueo, August 2, 1914 – December 24, 1941) was a Japanese athlete who competed mainly in the pole vault. He won a bronze medal at the 1936 Summer Olympics held in Berlin, Germany, tying with his teammate Shuhei Nishida. When the two declined to compete against each other to decide a winner, Nishida was awarded the silver after a decision of the Japanese team, on the basis that Nishida had cleared the height in fewer attempts.[2] The competition was featured in a scene in the documentary Olympia, filmed by Leni Riefenstahl. On their return to Japan, Nishida and Ōe had their Olympic medals cut in half, and had a jeweler splice together two new “friendship medals”, half in bronze and half in silver.[3] 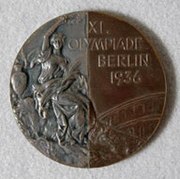