Steven Michael Burns (born October 9, 1973) is an American actor, television host, and musician. He is best known as the original host of the long-running children's preschool television program Blue's Clues from 1996 until 2002, for which he was nominated for a Daytime Emmy in 2001.

Burns was born in Boyertown, Pennsylvania, to Joseph Burns Jr (1938-2015) and Janet Burns (née Petaccio). He has two sisters. His father served in the US Navy and later became the human resources director of Safeguard Business Systems.[1] He attended Boyertown Area Senior High School in Berks County, graduating in 1992.[2]

Burns played in bands called Sudden Impact US, Nine Pound Truck, and the Ivys (which he has called a "Morrissey rip-off band") while in high school and college.[3] He studied theatre under an acting scholarship at DeSales University in Center Valley, Pennsylvania, in the Lehigh Valley, where he was discovered by an agent.[4] He dropped out of school and moved to New York City to then become a professional actor.[5] He lived in a basement apartment near Times Square, finding his first success as a voice-over artist for ads and making appearances on Homicide: Life on the Street and Law & Order.[4]

He divides his time between Williamsburg, Brooklyn, and Delhi, New York.[6]

In 1995, Burns auditioned for Blue's Clues, thinking it was another voice-over role.[5] He had long hair and an earring. "I was a bit of a skate rat," he said.[4] Initially, the Nickelodeon executives were not supportive of Burns hosting their new show; in subsequent auditions, the show's creators requested that he dress more conservatively. (Burns reported that the creators, in a call-back phone conversation, asked him, "Could you not look like yourself tomorrow morning?")[7] It became apparent, however, that he was the favorite with preschool test audiences. Executive producer and co-creator Traci Paige Johnson reported that of the 100 people they auditioned, Burns was "the realest".[5] As Alice Wilder, Nickelodeon's Director of Research and Development, said: "[T]here was just something about this kid, who was fresh out of Pennsylvania, who just knew where to look in the camera to really talk to kids. He was just right."[7]

Blue's Clues was an instant hit due to Burns's performances as much as the show's format. He became "a superstar" among his audience and their parents, but unknown to everyone else,[5] and enjoyed what he called being a "micro-celebrity, about as small a celebrity as you can be".[4] As The New York Times reported, he "developed an avid following among both preteen girls and mothers. The former send torrents of e-mail; the latter scrutinize the show with an intensity that might make even Elmo, the red Muppet, blush."[4] In 2000, People included Burns in their annual list of America's most eligible bachelors.[8] According to writer Diane Tracy, Burns was "destined for the part".[9] Also, according to Tracy, Burns was not the typical children's television host: "There is nothing syrupy about him—his humor is sometimes borderline offbeat, but never inappropriate for preschoolers."[9]

Burns became "very involved" with the production of Blue's Clues from the beginning.[8] One of the most challenging aspects of hosting the show was performing on the "blue screen" before the animation was added.[10] Burns called it "maddening"[8] and likened it to "acting at the bottom of a swimming pool".[11]

According to Johnson, Burns never wanted to become a "children's host". He loved kids, but stated, "he could not make a life-long career out of it."[5] Burns went on by saying, "I knew I wasn't going to be doing children's television all my life, mostly because I refused to lose my hair on a kid's TV show, and it was happening, fast."[7] The day following the filming of his final episode for the show, he shaved his head – something that he wanted to do for many years, but the show's producers would not allow.[14] He explained in a 2016 interview that "a lot of the original people on the show, like the people who created it, were all moving on to other careers. It just felt like time."[15]

Burns's departure led to the resurfacing of rumors that had circulated about him since 1998, including death from a heroin overdose, being killed in a car accident, and (similar to rumors about Paul McCartney in 1966) being replaced with a look-alike. Burns made an appearance on The Rosie O'Donnell Show to dispel these rumors,[7] and he and co-creator Angela Santomero appeared on The Today Show to help concerned parents extinguish the fears of kids who may have heard these rumors.[13]

Burns consulted on the casting for the revival of Blue's Clues, titled Blue's Clues & You! and hosted by Joshua Dela Cruz.[16] He and Patton reprised their roles in the premiere episode to welcome their cousin "Josh".[17] Burns has written and directed several episodes of the new show.[18]

Burns appeared in videos for the 25-year anniversary of Blue's Clues in 2021, including a widely watched Twitter video in which he – in character as the host of the show – explained reassuringly that he had never forgotten the viewers after leaving to go to college, and marveling at how much each of them had experienced since then.[19][20][21][22][23]

Burns narrated the interactive children's show Roll Play from 2006 to 2010. 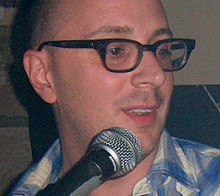 Burns performing with his band in 2009

Burns worked on material for his first album, Songs for Dustmites, for two and a half years at a small studio in his home in Brooklyn before it was produced by PIAS Records in late 2002. He started work on the album after he left Blue's Clues in 2002, and it was released in 2003.[5] He posted eleven songs on his webpage and then realizing he needed help with drums and arrangements went to Steven Drozd of The Flaming Lips for advice. Drozd assisted Burns with six tracks, Lips bassist Michael Ivins engineered the album, and longtime Lips producer Dave Fridmann produced it. One of the songs from the album, "Mighty Little Man", is used as the opening theme for the CBS series Young Sheldon.[24] Burns appeared on the series in January 2020, playing a Star Trek enthusiast whom the title character meets.[25]

Burns started a band, Steve Burns and the Struggle, and completed his second album, Deep Sea Recovery Efforts, which was released in 2009. Members of the Struggle include Drozd and Ryan Smith of A Million Billion.

Burns acted in the 2007 horror-comedy film Netherbeast Incorporated with Darrell Hammond and Dave Foley, playing the part of a vampire.[26] In 2008, he played an astronaut in Christmas on Mars, a science fiction film from The Flaming Lips.[14] In March 2012, he appeared in the YouTube comedy series The Professionals.[27]

He appeared in DeSales University's production of Amadeus as the title character in 2007 and also appeared in The Comedy of Errors.[28]

In late 2016, Burns released a children's album with Drozd, titled Foreverywhere under the name "STEVENSTEVEN". They released a video of the album's first song, "The Unicorn and Princess Rainbow".[15]