Chinese entrepreneur
This is a Chinese name; the family name is Ho.

Stanley Ho Hung-sun GBM GLM GBS GML OBE CStJ SPMP SPMT (Chinese: 何鴻燊, 25 November 1921 – 26 May 2020) was a Hong Kongese-Macau billionaire businessman, and philanthropist. His original patrilineal surname was Bosman. Their surname was later sinicized to 何 (Ho). He is of Dutch-Jewish ancestry. He was the founder and chairman of SJM Holdings, which owns nineteen casinos in Macau including the Grand Lisboa.

Ho had been nicknamed variously Godfather and King of Gambling, reflecting the government-granted monopoly he held on the Macau gambling industry for 75 years. His wealth was divided among his daughter, Pansy Ho ($5.3 billion)[1] who owns MGM Macau, fourth wife Angela Leong ($4.1 billion)[2] who is managing director of SJM Holdings, and son Lawrence Ho ($2.6 billion)[3] who owns City of Dreams.

Ho was the founder and chairman of Shun Tak Holdings, through which he owned many businesses including entertainment, tourism, shipping, real estate, banking, and air transport. It is estimated that his businesses employ almost one-fourth of the workforce of Macau.[4] Apart from Hong Kong and Macau, he also invested in mainland China, Portugal, North Korea where he operated a casino, Vietnam, the Philippines, Mozambique, Indonesia and East Timor.

His opinions and statements on Hong Kong's real estate and commercial development had considerable sway on the market. In his later years, he had been involved in litigation with his sister, Winnie Ho, concerning the ownership of the Macau casino. Having suffered a stroke in July 2009, followed by a long period of recovery, Ho began steps in late 2010 to devolve his grip on his financial empire to his various wives and children. Ho died on 26 May 2020 at the Hong Kong Sanatorium & Hospital.[5][6]

Ho studied at Queen's College, Hong Kong, at which he attended Class D - the lowest class level in the then Hong Kong Class System - owing to unsatisfactory academic results.[9] However, he later received a scholarship to the University of Hong Kong.[10] He became the first student from Class D to be granted a university scholarship. His university studies were cut short by the outbreak of World War II in 1942.[11] 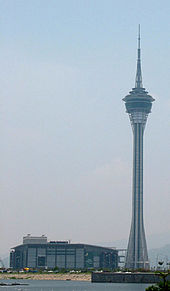 Ho began clerical work at a Japanese-owned import-export firm in Macau. He made his first fortune smuggling luxury goods across the Chinese border from Macau during World War II.[13] In 1943 he set up a kerosene company and established a construction company with his money.

Ho, along with partners including Hong Kong tycoon Henry Fok, Macau gambler Yip Hon and his brother-in-law Teddy Yip, bid for Macau franchises. By bidding high and promising to promote tourism and to develop infrastructure, they won the public tender for Macau's gaming monopoly license in 1961,[14] defeating the long-time Macau casino barons, the Fu family, by MOP 17,000.[15] In 1961 the company was renamed Sociedade de Turismo e Diversões de Macau, S.A.R.L. (STDM). Business at its flagship Lisboa Casino Hotel blossomed, the hotel later becoming well known internationally. In the same year, Ho also set up Shun Tak Holdings Ltd, which was listed on the Stock Exchange of Hong Kong. Through a subsidiary, TurboJET, it owns one of the world's largest fleets of high-speed jetfoils, which ferry passengers between Hong Kong and Macau.[16]

Ho's investments in Macau were diverse. In 1989, after STDM took full control of the Macau Jockey Club, Ho became its chairman and chief executive officer. In 1998 Ho became the first living Macanese resident to have a local street named after him. He also launched Asia's first football and basketball lottery, called SLOT.[17]

Ho was named by the Canadian Government, citing the Manila Standard newspaper, as having a link to the Kung Lok Triad (Chinese mafia) and as being linked to "several illegal activities" during the period 1999–2002.[18] Ho's alleged ties to Chinese organized crime have also been reported by the New Jersey Division of Gaming Enforcement, citing a U.S. Senate committee and several government agencies, when the state investigated his ties to American casino operator MGM Mirage.[19] 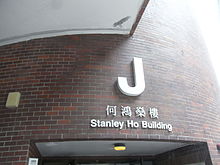 In 1987, Portugal agreed to return Macau to China in 1999. Ho took part in the joint advisory committee. He was a Standing Committee member of the 9th National Committee of the Chinese People's Political Consultative Conference.[31]

Ho had 16 children born to four women. Ho referred to his children's mothers as his wives.[34] Polygamy remained legal in Hong Kong until 1971.[35]

In 1942, Ho married his wife, Clementina Angela Leitão, from the prestigious Portuguese Leitão family (Chinese:黎登)– her grandfather was a lawyer and Macau's only notary public at the time. They had four children. Leitão was involved in a motor vehicle accident in 1973, and suffered partial memory loss as a result. In 1981, Ho's and Leitão's son Robert and daughter-in-law Suki Potier died in a car accident. Clementina Leitão Ho died in 2004 and was buried in the St. Michael the Archangel Cemetery (Portuguese: Cemitério São Miguel Arcanjo).

In the late 1950s, Ho met his first concubine Lucina Azul Jean Ying née Laam King-ying. This Union was recognized in Macau n Hong Kong at that time due to the lagacy rulings from the Chinese Qing Dynasty. The relationship resulted in five children including daughters Daisy Ho, to whom Ho ceded the chairmanship of SJM,[25] and Pansy Ho, a 50 percent partner in MGM Macau; son Lawrence Ho, CEO of Melco Crown Entertainment Ltd, another Macau-based casino company; and Josie Ho (何超儀), a rock singer and award-winning actress. Lucina's family now resides in Canada.

Ina Chan became Ho's Mistress in 1985. This Union is not legitimate by both laws in Hong Kong or in Macau. Ho's wife Clementina Leitão needed constant nursing care following her car accident, and Ina Chan was one of the nurses brought in to look after Leitão. Ho and Chan have three children together; Laurinda Ho, Florinda Ho, and Orlando Ho.

He took yet another mistress after Ina, Angela Leong On-kei, with whom Ho has had four children, met Ho in 1988 when she was his dance instructor.[35] Ho and Leong's children are Sabrina Ho, Arnaldo Ho, Mario Ho and Alice Ho.[36] Leong is now an incumbent member of the Legislative Assembly in Macau.

Over the years, dancing was one of Ho's favourite hobbies and he achieved excellence in the tango, cha-cha-cha, and waltz. He often danced for televised charity fundraisers and sponsored numerous dance performances in Hong Kong and Macau, including the Hong Kong Arts Festival and the Macau Arts Festival, promoting the art of dance. He also invited internationally renowned dancing groups, such as the National Ballet of China, to perform in Hong Kong and Macau. Ho was a patron of the Hong Kong Ballet, the International Dance Teachers Association and was a Fellow of the Royal Academy of Dance. One of a number of thoroughbred racehorses owned by Ho, Viva Pataca, named after the currency of Macau, won several top Hong Kong races in 2006 and 2007.

In late July 2009, Ho suffered a fall at his home that required brain surgery. For seven months Ho was confined to the Hong Kong Adventist Hospital and, later, the Hong Kong Sanatorium and Hospital, during which period he made only one public appearance, on 20 December 2009, when he travelled to Macau to meet Chinese president Hu Jintao on the occasion of the 10th anniversary of Macau's return to Chinese sovereignty.[40] Ho was discharged from the Hong Kong Sanatorium and Hospital on 6 March 2010 and thereafter employed a wheelchair.[41]

In 2003, Ho donated a Qing dynasty bronze boar's head to China's Poly Art Museum, a state-run organisation that aims to develop, display, rescue and protect Chinese cultural relics. The boar's head is part of a collection of 12 looted from the imperial Summer Palace in Beijing in 1860 when it was sacked and burnt by the French and British armies.[42] On 21 September 2007, Ho donated to the Chinese government a Qing dynasty bronze sculpture of a horse's head originally taken from the Old Summer Palace. Ho had reportedly just purchased it from a Taiwanese businessman for US$8.84 million.[43]

In late January 2011, a dispute erupted among his wives and children involving the transfer of ownership of his private holding company, Lanceford.[44] On 27 December Lanceford allotted 9,998 new shares, representing 99.98 per cent of its enlarged share capital, to two British Virgin Islands companies: Action Winner Holdings Ltd, wholly owned by third wife, Ina, holding 50.55 per cent and Ranillo Investments Ltd, equally held by each of Laam's five children, holding the balance. The allotment document filed with the Registrar of Companies was signed by Laam's daughter Daisy.[45]

Ho issued proceedings in the High Court, naming its directors – 11 defendants, including his second and third wives, and children Pansy and Lawrence Ho, alleging the group "improperly and/or illegally" acted in changing the share structure. The writ sought an injunction restraining the defendants from selling or disposing any of the 9,998 new shares in the company. The two British Virgin Islands companies were also named in the writ. Ho said his intention from the outset was to divide his assets equally among his families and that the actions of the directors of Lanceford effectively eliminated this possibility, according to a statement issued by his lawyer Gordon Oldham.[46]

Amidst confusion caused by conflicting statements from Ho and his wives and children about the state of the dispute, Ho, through Oldham – who had been allegedly sacked and rehired within the space of a few days – said he had been pressured to make public statements and sign legal documents without him being fully apprised of their contents.[46]

In 1984, Ho was awarded an honorary doctorate of social sciences from the University of Macau in 1984. In the New Year Honours 1990, Ho was appointed Officer of the Order of the British Empire (O.B.E.) "for services to the community in Hong Kong"[47] In 1995, The Government of Portugal appointed Ho to the Grã-Cruz da Ordem do Infante Dom Henrique (Great Cross of the Order of Prince Henrique), the highest honour for any civilian, for his contributions to society.[48] In 1998, Dr. Stanley Ho Avenue in Macau was named, the first Chinese person to be so honoured in Macau during their lifetime.[15]

In 2003 Ho received the Gold Bauhinia Star from the Chief Executive of Hong Kong, Tung Chee Hwa.[48] In 2008 Ho received the Medal for Business Entrepreneurialism from the city of Cascais and the street running adjacent to the Estoril Casino was renamed as Avenida Stanley Ho. It was the first road in Portugal to be named after a living Chinese citizen.[49] In June 2009 he received the Visionary award at the G2E Asia conference, organised by the American Gaming Association; the award was delivered by Macau SAR Chief Executive Edmund Ho. In November 2010, Ho was awarded the Grand Bauhinia Medal.[50]