Police shooting of a man in Kenosha, Wisconsin

On August 23, 2020, Jacob S. Blake, a 29-year-old African American[2] man, was shot and seriously injured by police officer Rusten Sheskey when Sheskey shot Blake seven times in his back during an arrest.[3][4] Four of the seven shots hit Blake.[5][6] The incident occurred in Kenosha, Wisconsin.[1][7][8][9] During the encounter, Blake was tasered and scuffled with officers.[10] He was shot as he opened the driver's door to his SUV and leaned in.[11] Three of Blake's sons were in the backseat.[12][13][14]

The police shooting was followed by protests, which included rallies, marches, property damage, arson, and clashes with police. Two protesters were also fatally shot in a confrontation with an armed civilian. Blake's name was invoked in protests in other cities as part of the Black Lives Matter movement, which has seen a resurgence in the wake of high-profile killings by police officers in 2020.[13]

The site where Blake was shot by the police

On August 23, Kenosha police responded to a 911 call about a "domestic incident" at approximately 5:11 PM. According to multiple official sources, the female caller referred to Blake as her "boyfriend", said he was not permitted to be on the premises, and that he'd taken her car keys and was refusing to give them back.[15][16] Officers were also informed by the dispatcher that there was a "wanted" alert for someone at the address, indicated by police code 10-99.[9] Blake had a warrant for his arrest from July, based on charges of third-degree sexual assault,[note 1] trespassing, and disorderly conduct in connection with domestic abuse.[1][9] The woman who called 911 on August 23 to report that Blake had stolen her keys was the same woman who had previously filed the criminal complaint alleging that Blake had sexually assaulted her.[17][18] Both Kenosha Police Chief Daniel Miskinis and the Kenosha Professional Police Association stated that the officers dispatched on August 23 were aware of the pending warrant for Blake before they arrived on scene.[17][19][20]

According to a witness, Blake pulled his car up near "six or seven women shouting at each other on the sidewalk" and "Blake did not say anything to the women".[21] According to other witnesses, Blake was trying to intervene between two women who were arguing when police arrived.[13] According to the police union, the officers were dispatched because of a complaint that Blake was attempting to steal the caller’s keys and vehicle.[22]

Officers attempted to subdue Blake, and two officers used tasers on him.[23][13][24] A bystander who recorded a video of the incident told reporters that he heard police yelling "drop the knife", but also said, "I didn't see any weapons in his hands; he wasn't being violent".[25] The police union says that Blake was armed with a knife in his left hand, but officers did not initially see it, and he "forcefully fought with the officers, including putting one of [them] in a headlock", while ignoring orders to drop the knife.[26] "Based on the inability to gain compliance and control after using verbal, physical and less-lethal means, the officers drew their firearms," the police union added.[22][27] One of Blake's attorneys disputed this version of events, calling it "overblown", and saying that the police officers were the aggressors and immediately became physical with Blake upon arriving at the scene.[28] After an initial scuffle, Blake walked to the driver's side of his vehicle, followed by officer Rusten Sheskey and another officer with handguns drawn. Sheskey attempted to grab Blake, and when Blake opened the driver's side door and leaned in, Sheskey grabbed him and fired seven shots towards Blake's back.[13][29] In a press conference on August 26, 2020, Wisconsin Attorney General Josh Kaul said that a knife was recovered from the driver-side front floorboard of the car Blake was leaning into when he was shot in the back. Kaul also said that Blake told investigators that he had a knife, though Kaul declined to describe the knife or say whether it was related to the shooting; Blake's lawyers disputed the implication that the knife was in his possession.[30]

Blake was flown to Froedtert Hospital in Wauwatosa, Wisconsin.[24] His father announced on August 25 that Blake was paralyzed from the waist down and that doctors do not yet know if it would be permanent.[31] He also suffered a gunshot wound to one arm and damage to his stomach, kidney, and liver; he had to have most of his small intestines and colon removed.[32] Blake was initially handcuffed to his hospital bed and guarded by two officers due to an outstanding warrant. The handcuffs were removed and the officers stopped guarding Blake after he posted bond.[33][34]

Blake's family retained Crump, who also represented the families of Trayvon Martin and Michael Brown in their civil suits.[37] Crump called for the officer who shot Blake to be arrested, and others involved to be fired.[38]

On August 26, Wisconsin attorney general Josh Kaul announced that Kenosha police officer Rusten Sheskey shot Blake seven times in the back as he opened the door of his car. No other officers at the scene opened fire. All were placed on administrative leave.[39]

On August 28, the police union said that most narratives about the shooting were wholly inaccurate and purely fictional, including information from Blake's attorneys.[27] It also criticized a statement released by the Wisconsin Department of Justice's Division of Criminal Investigation, which is leading the investigation into the police shooting, as "riddled with incomplete information."[27]

Main articles: Kenosha protests and Commitment March: Get Your Knee Off Our Necks 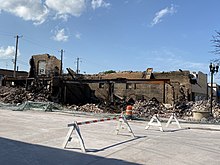 1,000 National Guard troops were sent to Kenosha to restore order during protests.[41]

Protests followed, leading Kenosha County to declare a state of emergency overnight on August 24 after police vehicles were damaged, a dump truck set on fire, and the local courthouse vandalized. An officer was knocked down with a brick, and tear gas was deployed.[24][42][43] Police urged 24-hour businesses to consider closing because of numerous calls about armed robberies and shots being fired,[44] and the Wisconsin National Guard was deployed to maintain public safety. Up to 200 members were to be deployed.[45] On August 24, the protesters set fires and looted businesses for a second night.[46][47] On August 25, the protests and fires continued throughout Kenosha, and civilians armed with guns patrolled parts of the city.[48]

On August 25, two protesters were killed and one seriously wounded;[49] a 17-year-old male was arrested the next day and charged with first-degree intentional homicide.[50]

Multiple professional sports teams went on strike in protest, refusing to play their scheduled games.[52] In the NBA Bubble, the Milwaukee Bucks boycotted their August 26 first-round playoff game against the Orlando Magic in protest of the shooting. The team decided not to come out of their locker room minutes before the scheduled start to the game.[53] Later that day, the National Basketball Association (NBA) and the National Basketball Players Association announced that in light of the Bucks' decision to refuse to play, all NBA games for the day were postponed.[54] This led to other boycotts from other American sports leagues, including the Women's National Basketball Association (WNBA), Major League Baseball (MLB), the National Hockey League (NHL), and Major League Soccer (MLS).[52]

Wisconsin Governor Tony Evers issued a statement denouncing the excessive use of force by police and invoking the names of African Americans killed by law enforcement.[55] Evers said, "While we do not have all of the details yet, what we know for certain is that he is not the first black man or person to have been shot or injured or mercilessly killed at the hands of individuals in law enforcement in our state or our country."[44] Evers called Wisconsin state lawmakers into a special session to pass legislation addressing police brutality.[56]

Former Vice President and 2020 Democratic presidential nominee Joe Biden said "these shots pierce the soul of our nation" and called for an "immediate, full, and transparent investigation".[57] Biden and his running mate Kamala Harris spoke to Blake's father for an hour.[58] On September 3, Biden and his wife Jill met with multiple members of Blake's family at Milwaukee Mitchell International Airport for 90 minutes; Blake joined the meeting by phone from his hospital bed. Biden then went to Kenosha to speak with members of the community at a local church. This was his first campaign trip to Wisconsin.[59]

President Trump's motorcade is led by motorcycles in Kenosha Wisconsin as he tours damage from the Kenosha protests.

President Donald Trump called the family, but Blake's mother Julia Black later apologized for missing the call,[60] while Blake's father said Trump had not tried to reach out.[58] Trump later said the shooting "was not a good sight. I didn’t like the sight of it, certainly, and I think most people would agree with that."[61] Trump planned to visit Kenosha on September 1, 2020 to see the damage caused by the protests and meet with law enforcement.[62] Governor Evers asked him to reconsider his visit over concerns that his presence would hinder efforts to "overcome division".[63] Kenosha Mayor John Antaramian expressed similar reservations, saying the trip was "ill advised".[64] However, Trump insisted he was going to make the trip, but does not plan to meet with Blake's family.[64][61]

On September 1, Trump and Attorney General William Barr visited Kenosha. They held a roundtable discussion with the county sheriff, the chief of police, and others. Trump promised financial help to city and state law enforcement and to businesses which had been burned down.[65]