Putnam was born on May 15, 1968, in Newton, Massachusetts to father Edward R. Putnam and mother Barbara Ann Donohue. He is of English and Irish descent. His parents are divorced. Seth was married to his first wife, Alison Dunn, from December 1998 through June 2001. He married Julie, his second wife, on May 17, 2008.[2] From 1986 to 1988, Putnam played bass in the thrash metal band Executioner.

Despite his shock humor and turbulent lifestyle, Putnam was often described by fans and peers as a warm, intelligent, and sensitive person. Putnam saw himself as a comedian and used music as an outlet.[3]

In school, classmates who knew Putnam described him as intelligent and stern, but unmotivated, apathetic and often an underwhelming student. Putnam skipped a grade in school and became a very bright student, tutoring his classmates. In his own words, Putnam often blamed brutal fights with Catholic school nuns for helping to shape his cynical personality. When he reached high school, he had lost interest in excelling in education or academics, becoming more of a slacker and underachiever.[4] By the time he had graduated school, Putnam had left the Catholic religion in which he was raised. After graduation, Putnam showed no interest in attending college or university.

Putnam also made up his own religion when he was a child.[5] His all-time favorite bands were Negative Approach and The Village People, his favorite movie was The Bad Bunch.

On October 12, 2004, Putnam was hospitalized after ingesting a cocktail of crack cocaine, alcohol, heroin, and two months' worth of Ambien sleeping pills.[13] It has been reported that he spent the previous day contemplating suicide,[13] though exact circumstances surrounding the drug overdose are vague.

Prior to his coma in 2004, Putnam overdosed on heroin in 1998. In a 2007 interview, he said: "In 1998 I was dead for 10 minutes from a heroin overdose. The EMT's used that stuff to revive people and it didn't work. They tried it a second time for the hell of it and it worked. All I remember was waking up in my kitchen having no idea where I was. On the way to the hospital, the EMT told me I was probably going to have brain damage the rest of my life. By the time I got to the hospital I was completely back to normal though. I didn't see any 'mystic visions' or anything that time either."[14]

In February 2021, Jamey Jasta interviewed Jimmy Bower from Eyehategod on his podcast "The Jasta Show". Jasta mentioned a story where Putnam requested a mop to make sure the stage was clean because people were skating on it and eventually ended up attacking the audience with it instead. He also said he used to distro Anal Cunt's albums and book their shows. Bower told stories of Putnam using a fire extinguisher on stage and getting foam all over Eyehategod's gear, letting air out of the tires on someone's bike chained to a pole, and spending his entire night calling people long distance from the gas station he used to work at. Bower used to have a voice message from Putnam of him saying "Hi friend, how are you doing friend?".[20]

Jasta would also interview Eyehategod vocalist Mike Williams. Williams, who knew Putnam since 1988, said that Putnam was a normal guy off-stage and very quiet and soft-spoken. Williams also said that he used to call him long distance from the Chevron gas station that he worked at, so that all his calls would be charged to Chevron. Jasta said that Putnam used to call his old landline and trade records with him.[21]

Side projects and former bands 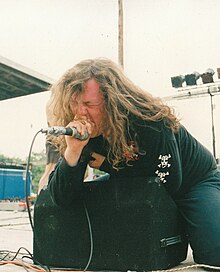 The idea of the band came up when Putnam and Larry Lifeless (Kilslug vocalist) were drunk one night watching Jerry Springer and Larry said "That guy looks like he should be in an old punk band called Angry Hate or something". The first recording was in January 1999 of Larry hammering a fence against some lady's garage which was put on at the end of the song, "M.P." on the first release. That summer, they recorded four songs, all of which were old Sickness songs. "Blinking Blue Lights" was actually recorded by Kilslug, but never released. The other songs originally by the Sickness were never released. They made another EP called Bad Mood that had a certain number of copies pressed but were never officially released. Putnam and Lee Suniga (owner of Menace to Sobriety Records) sold them on eBay. Angry Hate performed two live shows in March and April 2002.

Satan's Warriors started in February 1986 after Putnam and his friends made up a fake death metal fanzine with fake band names as a joke. Putnam eventually admitted to doing it in April of that year. There was an opening for a band to play live over the radio, so Putnam got a lineup together and made a four-song demo with him on drums and vocals, and his cousin Drew on guitar. Their final show was in July 1988. They were supposed to get back together in 2003 and re-record some songs written between 1986 and 1988. The lineup was supposed to be with Putnam on guitar and vocals, Paulie Kraynak on second guitar, and John Gillis on drums.

In early 1997, Putnam and Josh Martin came up with the idea of starting a joke black metal band and decided to record a demo. They didn't use actual drums because someone was sleeping in the room next to them, so Martin played his acoustic guitar while Putnam did vocals and percussion by slapping his leg and a mattress. They did a few shows and sold copies of their first demo. The titles on the demo are different from the ones on the 7" vinyl release due to Putnam and Josh losing their copies of the demo and forgetting the titles.

Anal Cunt did a tour in Germany and performed some Shit Scum covers. Matthias Weigand (head of Ecocentric Records) liked the cover of the song "Shit Scum" and wanted to put out a 7". Putnam called the studio and asked about the reel. The guy on the phone said "it's right here, pick it up whenever you want", not knowing they owed money to the studio. Putnam mixed all the songs and sent them to Ecocentric Records. Ordonez never had a cover for the record so Weigand made one up. The record was eventually called "Manson Is Jesus". Ordonez wanted the record to be called "I Wish this Record Could Punch You in the Face", and have a fist on the cover. Shit Scum had already broken up by the time the album was released.[citation needed]

Full Blown A.I.D.S. started in 1997 while Putnam was jamming with his friend and cousin. In 1998, he wrote some songs and recorded a demo of "No One Cares" with Nate Linehan on drums. In 2002 he moved to Texas for a while but eventually moved back to Boston. In 2003 the band went into the studio and recorded some songs and mixed them in a day. They eventually put out two EPs and a compilation CD in 2008,[25] with both EPs and the song "Throwing Cars at People on Coke with Thor".

The Death's Head Quartet was a jazz/noise improvisational band that featured Putnam on bass and vocals, Chris Joyce on guitar, Robert Williams on drums, and Jim Hobbs on saxophone.[26] Their first release was called "Live on the Joint" which was a radio broadcast from November 1, 2001. Their second release was recorded on April 9, 2001 and was not released until 2003.

You're Fired started in 2002. Within two months they had a nine-song demo recorded which eventually became the Warning EP and was released in 2002. After Putnam died, they made an EP called The End with Paulie Kraynak on guitar. Most of the riffs were written by Putnam and the album was also recorded with Putnam's Gibson SG and Marshall amplifier that were also used on the Warning EP. The End was released in 2012 on vinyl and it also can be purchased on BandCamp along with the Warning EP.[27] The song "Throw It Off" from their last EP was originally an Anal Cunt song with different lyrics.[28]

Adolf Satan started in 2002 after Upsidedown Cross broke up. Putnam played drums for the band for a brief period of time. He eventually quit and Nate Linehan joined. They recorded a demo in 2003 and eventually made a self-titled studio album. They recorded another demo in 2006 before breaking up two years later.

Upsidedown Cross started in 1989 after Larry Lifeless' band "Kilslug" had a violent breakup. The first lineup featured Larry (vocals), Cheez (bass), and Scott Vangel (guitar) who went by "Shoehorn" in the band. Taang! Records thought the band were too insane to deal with, and wouldn't sign them unless Rico Pertoleum (ex-Kilslug) was in the band, he was kicked out after the songwriting for the first record was done. J. Mascis from Dinosaur Jr. filled in on drums for the first album. Throughout the 90's they had different lineup changes and had a few more releases. Seth Putnam ended up joining them on guitar and did one show with them which also turned out to be the bands last show before they eventually broke up, Seth ended up moving to Texas. There were plans to get the band back together with Josh Martin on guitar. According to Josh, Cheez wasn't in any state to be playing an instrument, so he ended up starting Adolf Satan instead. When Seth moved back to Boston him and Josh became the two guitarists for the band, Seth ended up quitting the band in March, 2003. Seth and Josh never recorded anything with the band despite Seth being credited on their split with Sloth, Cheez decided to put out an old recording and credit the lineup they had at the time. In 2011 Upsidedown Cross became a two-piece with Seth on drums and Larry on vocals and guitar. Some rehearsal footage exists of the band.[29][30][31]

Not much is known about this band but they had only one recording session in 2007 which eventually surfaced onto YouTube, the band had Putnam on vocals, Dejan Podobnik(Patareni, Millions of Dead Cops...) on drums and Chomi on guitar. Mickey Offender from D.R.I., Offenders, was supposed to lay a bass track but it never happened.

This band started in December 1990 and Putnam and Tim Morse were trying to think of a Christmas gift for Mike Mahan who recently moved to Indiana, they recorded a demo and got a band picture in a $2 photo booth. They sent it to Mike who eventually lost his copy, the demo was released as a split album with Cuntsaw.

Person Killer was a one-man project Putnam started around 1995, he made a demo and sent it to Earache Records along with a T-shirt, a pin, and a letter that didn't reveal the sender's name. It was planned to be released on a two LP set called "The Worst of Seth Putnam" but it hasn't been released.

Speculation circulated as to whether or not Putnam was a member of the white power grindcore/hardcore band Vaginal Jesus, after Putnam stated that he was just a friend of the band. However, he later retracted this claim and admitted to being a member.[32][33]

George H Brown was a blues rock band that originally featured Putnam on guitar, Mike Mahan on bass, Fred Ordonez on second guitar, Tim Morse on drums, and John McCarthy on vocals. Putnam eventually got frustrated with the band and broke it up. They got back together years later with Putnam doing guitar and vocals, Paulie Kraynak on bass and Josh Randall (FUKK/Full Blown A.I.D.S live drummer)[35] on drums. A Myspace page was made for the band and there were plans to release a debut CD.[36][37]

From Sloth to Anger