Rosamund Mary Ellen Pike[1] (born 1979) is a British actress and narrator. Her accolades include a Golden Globe Award, a Primetime Emmy Award and an Academy Award nomination.

She began her acting career by appearing in stage productions such as Romeo and Juliet, alongside Paul Ready, and Gaslight. After her screen debut in the television film A Rather English Marriage (1998) and television roles in Wives and Daughters (1999) and Love in a Cold Climate (2001), she received international recognition for her film debut as Bond girl Miranda Frost in Die Another Day (2002), for which she received the Empire Award for Best Newcomer. Following her breakthrough, she won the BIFA Award for Best Supporting Actress for The Libertine (2004) and portrayed Jane Bennet in Pride & Prejudice (2005).

Pike had film appearances in the sci-fi film Doom (2005), the crime-mystery thriller film Fracture (2007), the drama film Fugitive Pieces (2007), the coming-of-age drama An Education (2009), for which she was nominated for the London Film Critics Circle Award for British Supporting Actress of the Year, and sci-fi comedy The World's End (2013). She also received British Independent Film Award nominations for An Education and Made in Dagenham (2010), and was nominated for a Genie Award for Barney's Version (2010). Her other films include the spy action comedy Johnny English Reborn (2011), the epic action-adventure fantasy Wrath of the Titans (2012), and the action thriller Jack Reacher (2012).

In 2014, her performance in the psychological thriller Gone Girl was met with widespread critical acclaim, winning the Saturn Award for Best Actress and receiving a nomination for the Academy Award for Best Actress. Pike received further acclaim for her starring role as Ruth Williams Khama in the biographical drama A United Kingdom (2016) and for portraying the journalist Marie Colvin in the biographical war drama A Private War (2018), for which she was nominated for a Golden Globe Award for Best Actress. Pike won the Primetime Emmy Award for Outstanding Actress in a Short Form Comedy or Drama Series in 2019 for her role in State of the Union.[2] In 2021, Pike won her first Golden Globe Award for her critically acclaimed role as Marla Grayson in I Care a Lot.[3]

Pike attended Badminton School in Bristol, and while appearing as Juliet in a production of Romeo and Juliet at the National Youth Theatre, she was noticed by an agent who helped her embark upon a professional career. She kept her acting a secret[from whom?] until she went to Oxford University.

After being turned down by every stage school to which she applied, she gained a place to read English literature at Wadham College, Oxford. She graduated with an Upper Second-class honours degree in 2001, having taken a year off to pursue her acting career, gaining stage experience in David Hare's Skylight, Arthur Miller's All My Sons, and several plays by Shakespeare.[7]

While she was still at Oxford, Pike acted in and directed various plays, including one by Simon Chesterman, who was then a graduate student.[8] She also made appearances on British television shows, including A Rather English Marriage (1998),[9] Wives and Daughters (1999), and Love in a Cold Climate (2001), a miniseries based on Nancy Mitford's novels The Pursuit of Love and Love in a Cold Climate. She also appeared as Sarah Beaumont in an episode of the series Foyle's War. 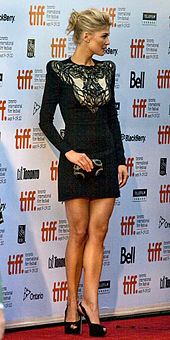 After graduating, she was offered a role as a Bond girl and MI6 agent assigned to aid James Bond in Die Another Day. She also appeared in the special show Bond Girls Are Forever and, shortly afterwards, the BAFTA tribute to the James Bond series. She was the first Bond girl to have attended Oxford.[10] Pike then played Elizabeth Malet in The Libertine (2004), co-starring Johnny Depp,[11] which won her the Best Supporting Actress award at the British Independent Film Awards.[12] In the same year, she portrayed Rose in The Promised Land, a film about Israel,[9] and starred as scientist Samantha Grimm in the cinematic adaptation of the computer game series Doom.[13]

In 2005, she appeared as Jane, the elder sister of Elizabeth (played by Keira Knightley), in Pride & Prejudice. Pike then starred in the film adaptation of Anne Michaels's novel Fugitive Pieces. She also starred as a successful attorney in the film Fracture, opposite Anthony Hopkins and Ryan Gosling. Pike was a judge at the 2008 Costa Book Awards.[14]

Her stage credits include Hitchcock Blonde by Terry Johnson and Tennessee Williams' Summer and Smoke, both in London's West End, and Gaslight at London's Old Vic Theatre.[15] In 2009, she played the title character in Madame De Sade during the Donmar's West End season.[16]

She appeared in the British film Made in Dagenham and in the Canadian film Barney's Version where she plays Miriam. In 2010, she starred in a production of Hedda Gabler on UK tour.

Pike has recorded voicework for a lead role in the film Jackboots on Whitehall and lent her voice to a series of James Bond audio-books, narrating The Spy Who Loved Me.[17] In 2010, Pike played the part of Pussy Galore in the BBC Radio 4 adaptation of Fleming's Goldfinger. In 2011, Pike played the part of Kate Sumner in the Bond spoof film Johnny English Reborn, playing a psychologist and English's love interest. The film is a sequel to the 2003 film Johnny English and was a box office success, taking over $160 million.

In 2012, she played the role of Queen Andromeda in the fantasy epic Wrath of the Titans. She replaced Alexa Davalos, who had played the role in Clash of the Titans and had dropped out due to a scheduling conflict.[18] Taking the role in Wrath of the Titans meant she had to drop out of consideration for a role in Man of Steel.[19] Although the film was not well received by critics, it grossed over $300 million and critics considered her performance to be one of the film's highlights.[20] She also starred as Helen Rodin, the female lead alongside Tom Cruise in the thriller Jack Reacher, an adaptation of the novel One Shot by author Lee Child. The film opened to positive critical reception and grossed over $218 million.[21] 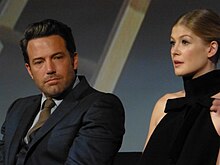 After a supporting role in the critically acclaimed The World's End (2013), Pike was seen in the David Fincher-directed thriller Gone Girl (2014), a film adaptation of Gillian Flynn's novel of the same name.[22] Featuring opposite Ben Affleck, Pike was cast as Amy Dunne, a woman who goes missing on her fifth wedding anniversary. According to Fincher, Pike was his first choice for the role because he wanted someone who was not widely known, Pike having not appeared in any major leading role prior to the film's commencement, and because he found her enigmatic and couldn't easily read her.[23][24] The film emerged as a box office hit, earning over $356 million in global ticket sales.[25] The movie and Pike's performance both earned widespread acclaim from critics.[26]

Richard Lawson of Vanity Fair wrote that the film is "Smartly shot, detailed ... and performed" and called Pike's portrayal "a star-makingly good performance, spellbinding in its operatic mix of tones and temperatures."[27] Todd McCarthy of The Hollywood Reporter said that she "is powerful and commanding ... Physically and emotionally, Pike looks to have immersed herself in this profoundly calculating character, and the results are impressive." She received numerous awards and nominations, including the BAFTA Award for Best Actress in a Leading Role, the Golden Globe Award for Best Actress – Motion Picture Drama and the Screen Actors Guild Award for Outstanding Performance by a Female Actor in a Leading Role.

Since 2015, she has voiced Lady Penelope Creighton-Ward in the remake of Gerry Anderson's Thunderbirds Are Go produced by ITV in conjunction with Weta Workshop. In February 2016, she starred in the music video for Voodoo in My Blood by Massive Attack, directly inspired by the subway scene with Isabelle Adjani in the movie Possession (1981) directed by Andrzej Żuławski.[28]

In 2017, she took the role of The Woman in the short film The Human Voice, written and directed by Patrick Kennedy and based on the play La Voix Humaine by Jean Cocteau, for which she won Best Actress at the Oxford International Film Festival.

In 2019, she was cast in the role of Moiraine in Amazon Video's adaptation of Robert Jordan's fantasy epic The Wheel of Time.[29] Her other films include the thriller The Informer and the biopic Radioactive; in the latter, she played Marie Curie.

In 2021, Pike starred as con artist Marla Grayson in the crime thriller I Care a Lot, directed by J Blakeson and co-starring Peter Dinklage, Eiza González and Dianne Wiest. Her performance received universal acclaim; David Rooney of The Hollywood Reporter said "Pike brings crisp efficiency and dead-eyed amorality to a legal conservator",[30] and ABC News journalist Peter Travers wrote that "Pike makes a feast of the role".[31] At the 78th Golden Globe Awards, she won the award for Best Actress in a Comedy or Musical.[32]

While at Oxford, Pike was in a relationship with Simon Woods which lasted two years.[33] They later played the lovers Jane Bennet and Charles Bingley in Pride & Prejudice. She was then engaged to the director of that production, Joe Wright, before they broke up in 2008.[34]

Since December 2009, Pike has been in a relationship with Robie Uniacke (born in 1960), a businessman and mathematical researcher, and they have two sons, both fluent in Mandarin.[35][36][37][38] In 2015, when they visited China to promote Gone Girl, Pike mentioned that Uniacke had given her a Chinese name 裴淳华 (traditional Chinese: 裴淳華, pinyin: Péi Chúnhuá, IPA: [pʰěi ʈʂʰwə̌n.xwǎ]),[39] and, being fans of Chinese culture, they requested the media to use this as her Chinese name rather than the transliteration of her English name.[40]

In 2015, Pike signed an open letter for which the ONE Campaign had been collecting signatures; the letter was addressed to Angela Merkel and Nkosazana Dlamini-Zuma, urging them to focus on women as they would serve as the head of the Group of Seven (G7) and the African Union (AU), respectively, which would start to set the priorities in development funding before a main United Nations (UN) summit in September 2015, supposed to establish new development goals for the generation.[41]

In 2021, Pike became an investor and the creative director for the psychedelic-inspired meditation app Lumenate, which aims to guide the user into an altered state of consciousness.[42]