More than a dozen women have publicly accused Jeremy of sexual assault over the years. Several of the allegations relate to his appearances at fan conventions, alleging that he would grope and insert his fingers into attendees without their consent. In June 2020, Jeremy was charged with four counts of rape and sexual assault involving four women and in August 2020, he was charged with another 20 counts of either rape or sexual assault over a span of 16 years from 2004 to 2020 that involved 12 women and a 15-year-old girl.[5] In total, Jeremy faces a potential 250-year prison sentence if he is found or pleads guilty in court. However, there has been no court hearing so far. [6]

Ronald Jeremy Hyatt was born in Queens, New York, to a middle-class Jewish family from Russia and Poland.[7][2] His father, Arnold (born 1918),[8] was a physicist and professor at Queens College, CUNY, and his mother a book editor[9] who had served in the O.S.S. during World War II, as she spoke fluent German and French.[10]

Jeremy left the teaching profession (he called it his "ace in the hole") to pursue a legitimate acting career on Broadway. He has said that he learned then what it was like to be broke, making no money as an actor who "starved Off-Broadway". Jeremy soon found work posing for Playgirl after his then-girlfriend submitted his photo to the magazine.[12] Jeremy utilized this opportunity as a springboard into the adult film industry, which he viewed as a reliable means of supporting himself.[13] 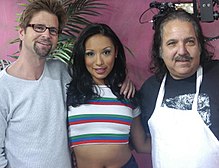 Jeremy is the Lead Antagonist/League Owner in the sports comedy Tetherball: The Movie and appeared in the western comedy Big Money Rustlas featuring Insane Clown Posse in 2010.

In 1980, Jeremy competed on the game show Wheel of Fortune, using his real last name, as Ron Hyatt. Among his winnings was a trip to Mazatlán.[26]

Jeremy appeared in the second season of The Surreal Life,[27] during which he developed a close friendship with Tammy Faye Bakker despite her devout Christianity and disapproval of pornography, and returned to the franchise for the ninth season of The Surreal Life: Fame Games,[28] in which he finished second to Traci Bingham on the season finale, which aired on March 25, 2007. Jeremy also appeared in a segment on Comedy Central's Chappelle's Show. Additionally, he made appearances on Penn and Teller's Bullshit! in episodes regarding penis enlargement and circumcision. In 2005, he appeared on the UK reality TV show, The Farm. Jeremy also made a brief cameo on Lewis Black's Root of All Evil, in the episode "YouTube VS Porn", in a short segment where people on the street were shown a video of hardcore pornography, and Jeremy was the only one disgusted by the video.

Jeremy was seen in the Robot Chicken episode, "A Piece of the Action", in which he was voiced by Michael Benyaer. In the episode, he and several others parody The Surreal Life and Lord of the Rings. The segment lampoons his penis size by having his character unseat a knight on horseback using nothing but his erect penis. Jeremy appeared as himself in the 2001 Family Guy episode "Brian Does Hollywood", in which he is a presenter at an adult industry award show in which Brian Griffin is a nominee. Comedian Kathy Griffin went on a date with him in the third season of her reality show, Kathy Griffin: My Life on the D-List. Ron Jeremy has also appeared in a part on the Comedy Central show Tosh.0

Jeremy has appeared in videos by Sublime, Mercury Rev, Moby, Insane Clown Posse, Kid Rock, LMFAO, Everclear, Sam Kinison, Guns N' Roses[citation needed], Mad Yellow Sun, Los Umbrellos, XXX Rottweiler Hundar (Icelandic), the Radioactive Chicken Heads, A Day To Remember, Escape The Fate, Christina Linhardt, Necro, Flight of the Conchords, My Darkest Days, Armin Van Buuren, Loud Luxury, The Meices,[30] and Steel Panther. In addition, he released a rap single called "Freak of the Week" which peaked at 95 on the Billboard rap charts;[31] a music video for this was also produced.[32] Jeremy introduced Boston ska punk band Big D and the Kids Table at the 2011 and 2013 Vans Warped Tour in Carson, California, and also appeared in their new video for the song One Day. In 2001, he made a small appearance in industrial/groove metal band Fear Factory's DVD Digital Connectivity, where he welcomes the viewer, in the "Digimortal" portion of the DVD, "to the world of Fear Factory". In 2008, Brooklyn rap artist Necro featured Ron as well as Jack Napier, Rebeca Linares, and several others for the videos "Who's Ya Daddy" and "I Wanna F**k". In 2011, he appeared in LMFAO's music video for the song "Sexy And I Know It". In 2011, he also appeared on the rap group "Bankrupt Records" album "Double Vision" on the skit "The Ron Jeremy Call".

Jeremy appeared in a series of viral video spoofs for video sharing website Heavy.com. The videos lampooned include Britney Spears, lonelygirl15, Little Superstar and others.[36] In 2007 he had a cameo appearance in "The Plot to Bomb the Panhandle" video, by the band A Day to Remember. In addition, Jeremy appeared on an episode of Gorgeous Tiny Chicken Machine Show, titled "Pamous Movie Star". 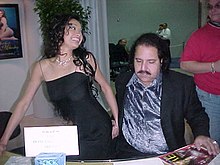 In January 2009, Jeremy appeared with David Faustino (Bud Bundy from Married with Children) in an episode of Faustino's show Star-ving, which airs on Crackle, as does the Gorgeous Tiny Chicken Machine Show.[37] In June 2009, he did a cameo in the music video "10 Miles Wide" by Escape The Fate, along with Dennis Hof and other adult video performers.[38] In December 2010, Jeremy starred in the Break.com video Tron Jeremy, a parody of the film Tron: Legacy.[39] In October 2013, Jeremy appeared in Bart Baker's parody of Miley Cyrus's Wrecking Ball.[40]

Jeremy released his memoir, titled Ron Jeremy: The Hardest (Working) Man in Showbiz, in February 2007.[41] The book was published by Harper Collins.[42]

In June 2009, Jeremy and business partner Paul Smith opened Ron Jeremy's Club Sesso, a swingers nightclub located in the financial district of downtown Portland, Oregon.[43] The club was closed June 20, 2015, over legal problems with the city.[44]

Jeremy is also involved in the marketing of a line of rum "Ron de Jeremy"[45][46][47] to which he lent his name ("ron" being Spanish for "rum"). Television ads for the rum featuring Jeremy proclaim that it's rum "Ron Style". 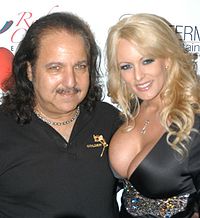 Jeremy and Stormy Daniels at Jeremy's birthday party in March 2007

On January 29, 2013, Jeremy drove himself to Cedars-Sinai Medical Center after experiencing severe chest pain.[48] Doctors discovered an aneurysm near his heart and he was operated on the following day.[48][49] Three weeks later, he was released from the hospital.[49]

More than a dozen women have publicly accused Jeremy of sexual assault. Several of the allegations relate to his appearances at fan conventions, alleging that he would grope and insert his fingers into attendees without their consent. The organizers of the Exxxotica national adult conventions permanently banned Jeremy from their shows in October 2017 after a social media campaign by webcam model Ginger Banks.[50][51][52] Due to the allegations, the Free Speech Coalition, an industry trade group, rescinded its Positive Image Award, which it had presented to him in 2009.[53]

In June 2020, Jeremy was charged with four counts of rape and sexual assault by the Los Angeles County District Attorney's Office.[54][55] Jeremy was accused of forcibly raping a 25-year-old woman at a home in West Hollywood in May 2014. He also allegedly sexually assaulted two women, ages 33 and 46, on separate occasions at a West Hollywood bar in 2017, and is accused of forcibly raping a 30-year-old woman at the same bar in July 2019. Owner of Golden Artists Entertainment, Dante Rusciolelli, announced they were dropping Jeremy as a client following the charges.[56] On June 27, Jeremy pleaded not guilty to all charges. Jeremy posted his response to the charges on Twitter saying : "I am innocent of all charges. I can’t wait to prove my innocence in court! Thank you to everyone for all the support."[57]

Three days after Jeremy was initially charged, prosecutors said they had received an additional 25 allegations of misconduct involving Jeremy, 13 of which had occurred in L.A. County. Since then, six additional women who worked in the adult entertainment industry came forward claiming that Jeremy had raped or abused them. In July 2020, a law enforcement official confirmed that the L.A. County Sheriff's Department had received 30 new allegations of forcible rape and groping against Jeremy involving incidents that took place in L.A. County since 2000.[58]

On August 31, 2020, Los Angeles prosecutors filed 20 more counts that included charges of rape, sexual assault, sodomy and forcible penetration by foreign object against Jeremy that involved 12 different women with ages ranging from 15 to 54 years old and that spanned over 16 years from 2004 to 2020. One woman alleges that she was sexually assaulted by Jeremy at a party in Santa Clarita in June 2004, when she was 15.[59] The most recent incident is said to have occurred on January 1, 2020, when a 21-year-old woman alleged she was sexually assaulted outside of a business in Hollywood. Six other women alleged sexual assaults happened inside a West Hollywood bar the defendant frequented and another in the bar’s parking lot. Jeremy, who originally had a bail set at $6.6 million when first charged in June, was placed into custody at Twin Towers Correctional Facility.[60][61]