Type of chair
For other uses, see Rocking Chair (disambiguation).

A rocking chair or rocker is a type of chair with two curved bands (also known as rockers) attached to the bottom of the legs, connecting the legs on each side to each other. The rockers contact the floor at only two points, giving the occupant the ability to rock back and forth by shifting their weight or pushing lightly with their feet.[1][2] Rocking chairs are most commonly made of wood. Some rocking chairs can fold. 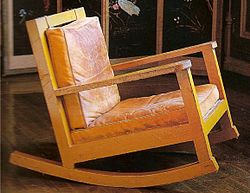 Rocking chairs are often seen as evocative of parenting, as the gentle rocking motion soothes infants and sends them off to sleep.[5]

Many adults find rocking chairs soothing because of the gentle motion. Gentle rocking motion has been shown to provide faster onset of sleep than remaining stationary, mimicking the process of a parent rocking a child to sleep.[6]

Rocking chairs are also comfortable because, when a user sits in one without rocking, the chair automatically rocks backward until the sitter's center of gravity is met, thus granting an ergonomic benefit with the occupant kept at an un-stressed position and angle.[citation needed]

Varieties of rockers include those mounted on a spring base (or platform) called "platform rockers" and those with swinging braces commonly known as gliders.[citation needed]

A photo of man lounging in a rocking chair while reading

Though American inventor Benjamin Franklin is sometimes credited with inventing the rocking chair, historians actually trace the rocking chair's origins to North America during the early 18th century, when Franklin was a child. Originally used in gardens, they were simply ordinary chairs with rockers attached. It was in 1725 that early rocking chairs first appeared in England. The production of wicker rocking chairs reached its peak in America during the middle of the 18th century. These wicker rockers, as they were popularly known, were famous for their craftsmanship and creative designs. Rocking cradles long predate rocking chairs however and an example exists from antiquity, found in the ruins of Herculaneum.

Michael Thonet, a German craftsman, created the first bentwood rocking chair in 1860.[7] This design is distinguished by its graceful shape and its light weight. These rocking chairs were influenced by Greek and Roman designs as well as Renaissance and colonial era artistry.[7]

During the 1920s, however, folding rocking chairs became more popular in the United States and in Europe. They were handy for outdoor activities and travel purposes. By the 1950s, rocking chairs built by Sam Maloof, an American craftsman, became famous for their durability and deluxe appearance. Maloof's rocking chairs are distinguished by their ski-shaped rockers.[8]

President John F. Kennedy made the P & P Chair Company's rocking chair famous. In 1955, Kennedy, who suffered with chronic back problems, was prescribed swimming and the use of a rocking chair by his physician. The President so enjoyed the rocker that, after he was inaugurated in 1961, he took the chair on Air Force One when he traveled around the country and the world. He bought additional rockers for Camp David and for the Kennedy estates; and he gave them as gifts to friends, family, and heads of state. Kennedy's rocking chair from the White House is on permanent display at the John F. Kennedy Library and Museum.

Per the manufacturing design, the Kennedy Rocking Chair is shaped, steam-bent, and assembled while the wood is still green.[9][10]