Rishi Raj Kapoor (04 September 1952 – 30 April 2020)[3] was an Indian actor, film director and film producer who worked in Hindi films.[4] He has received several accolades, including winning four Filmfare Awards, three Zee Cine Awards and a National Film Award. Kapoor is considered one of the most successful and greatest actors in the history of Indian cinema.

Kapoor met his future wife, actress Neetu Singh while working in films on film set, with whom he had two children, including Ranbir Kapoor. He died of leukaemia on 30 April 2020, aged 67.[12][13] 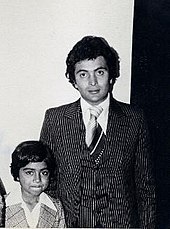 Kapoor was born on 04 September 1952 at his family's home, Raj Kapoor Bungalow, in Matunga, Bombay, in the then Bombay State of India, into a Khatri Punjabi Hindu family.[14][15][16][17] He attended Colonel Brown Cambridge School in Dehradun, Campion School in Mumbai and Mayo College in Ajmer.[18]

Being part of the Kapoor family, he was the second son of legendary actor-director Raj Kapoor and Krishna Raj Kapoor (née Malhotra).[19] Likewise, his family encompasses a successful line of actors, including brothers, Randhir and Rajiv Kapoor; grandfather Prithviraj Kapoor; paternal granduncle Trilok Kapoor, maternal uncles Prem, Rajendra, and Narendra Nath, as well as Prem Chopra; paternal uncles Shashi Kapoor and Shammi Kapoor; and paternal once removed cousins Anil Kapoor, Boney Kapoor and Sanjay Kapoor.[20][21] Rishi Kapoor's two sisters, on the other hand, include late Ritu Nanda, who was an insurance agent, and Rima Jain.[22] The actresses Karisma Kapoor and Kareena Kapoor, the actors Armaan Jain and Aadar Jain, and the businessman Nikhil Nanda are his nieces and nephews.

Around the age of three, Kapoor's first on-screen appearance was a cameo in his father Raj Kapoor's film Shree 420 (1955),[8] where he would appear in the musical sequence of "Pyar Hua, Iqrar Hua Hai".[21] Likewise, Raj Kapoor would direct the film that provided Rishi his debut role, the 1970 film Mera Naam Joker, in which the actor would portray the young version of the lead character (played by Raj Kapoor).[23][8]

Rishi Kapoor's first leading role would come in adulthood, opposite Dimple Kapadia, in the 1973 film Bobby, also directed by his father.[8] Bobby went on to become one of the decade's biggest hits in India,[24] and earned Rishi Kapoor the Filmfare Best Actor Award.[21] Regarding the film, he would say in a 2012 interview:[11] "There was a misconception that the film was made to launch me as an actor. The film was actually made to pay the debts of Mera Naam Joker. Dad wanted to make a teenage love story and he did not have money to cast Rajesh Khanna in the film". Following Bobby (1973), he starred in several light-hearted comedies within that decade, including, among others: Rafoo Chakkar (1975), with Neetu Singh; Amar Akbar Anthony (1977), with Amitabh Bachchan; and Khel Khel Mein (1975) and Hum Kisise Kum Naheen (1977) with Zeenat Aman.[8]

Kapoor worked with actress Neetu Singh for the first time in Zahreela Insaan (1974). The two would go on to share the screen in multiple projects, including Kabhi Kabhi (1976) and Doosra Aadmi (1976), and would eventually marry in 1980.[25] In 1980, Kapoor starred along with Tina Munim in director Subhash Ghai's reincarnation thriller Karz (1980), which went on to become a cult classic with popular music. In a role considered as one of his best works, Kapoor played an idealistic Devdhar in the 1982 film Prem Rog, a film based on the concept of widow remarriage, co-starring Padmini Kolhapure[26] Another highlight of his career, was Saagar in 1985, directed by noted director Ramesh Sippy, which saw Kapoor reunite with Dimple Kapadia, 12 years after they made their debuts in Bobby.[27] He appeared as the second lead in several multi-starrer films in the 1980s such as Naseeb (1981), Kaatilon Ke Kaatil (1981), Coolie (1983), Dosti Dushmani (1986), Ghar Ghar Ki Kahani (1988) and Gharana (1989). In the 1986 drama Ek Chadar Maili Si, adapted from Rajendra Singh Bedi's novel of the same name, Kapoor would play a man forced by customs to marry his widowed sister-in-law, played by Hema Malini.[21][28]

In 1991, Kapoor starred along with Pakistani actress Zeba Bakhtiyar in Henna, a tale of love across national borders, which was envisioned by his father, Raj Kapoor, and directed by his elder brother Randhir Kapoor.[29] Henna was India's submission for the Academy Award for Best Foreign Language Film. Kapoor also had a leading role in the 1993 film Damini, co-starring Meenakshi Seshadri and Sunny Deol, that went on to be considered a classic socially-oriented film[30] Between 1973 and 2000, Kapoor's other film roles (mainly as the romantic lead)[13] include:[23][21] Raaja (1975), Laila Majnu (1976), Sargam (1979), Bade Dilwala (1983),[8] Chandni (1989),[10] Bol Radha Bol (1992), Deewana (1992) and Karobaar (2000). Kapoor debuted as a director in Aa Ab Laut Chalen (1999) which starred Rajesh Khanna, Akshaye Khanna and Aishwarya Rai . This remained his sole directorial venture.[8]

After two decades, he had his on-screen reunion with actor Amitabh Bachchan in 102 Not Out (2018), in which the two play an old-aged father-son duo. In 2018, he appeared in the Netflix drama Rajma Chawal[8] and was critically acclaimed for his portrayal of a Muslim in Mulk.[21] In 2019, two films of Kapoor's were released: Jhootha Kahin Ka, a comedy-drama film directed by Smeep Kang; and The Body, co-starring Emraan Hashmi, a mystery-thriller written and directed by Jeethu Joseph.[35] Released on 13 December 2019, The Body would be Kapoor's last film.[13] Hitesh Bhatia's Sharmaji Namkeen (2020), co-starring Juhi Chawla, was under production and four day schedule was pending at the time of Kapoor's death.[36] Producer Honey Trehan on 8 May 2020 confirmed that the film will be released in theatres.[37] In January 2021, it was reported that Paresh Rawal is going to complete Kapoor's unfinished portions of the film and it will release on 4 September 2021, coinciding with his birth anniversary.[38]

Kapoor married actress Neetu Singh, who he had worked with in several films, in 1980.[8] The couple had two children— son, actor Ranbir Kapoor, and daughter, Riddhima Kapoor Sahni.[25]

Kapoor's autobiography Khullam Khulla: Rishi Kapoor Uncensored, was released on 15 January 2017. Kapoor wrote the book along with Meena Iyer, and the title was published under Harper Collins.[39][40] Kapoor's comments on being a "beef-eating Hindu" became controversial.[41][42][43]

Kapoor was known to make controversial socio-political comments. In March 2016, he criticized the Nehru–Gandhi family over naming of roads, buildings and national assets in the name of Gandhi and Nehru.[44] In September 2017, he again took on the Gandhi family by slamming Rahul Gandhi over dynastic politics.[45] In March 2020, he expressed anger and criticized the Indian Judiciary with the "Tareekh Pe Tareekh" dialogue of his film Damini over the delay in execution of the four perpetrators who were convicted in the Nirbhaya case due to loopholes in the laws.[46] The convicts were finally executed on 20 March at 5:30 am in Tihar Jail after it was deferred thrice.[47]

Rishi was diagnosed with leukemia in 2018 and went to New York City for treatment.[12] After successful treatment for a year, he returned to India on 26 September 2019.[48]

However, he was admitted to Sir H. N. Reliance Foundation Hospital on 29 April 2020 owing to breathing difficulties.[49] He died on 30 April 2020 from leukemia. His death came less than 24 hours after Irrfan Khan, another well-regarded actor and his co-star from D-Day died due to colon infection.[50] Kapoor's last rites were performed at Chandanwadi Crematorium and his ashes were immersed in Banganga.[51]

Kapoor felicitated by Col. Rajyavardhan Singh Rathore and General V. K. Singh at the inauguration of the BRICS Film Festival.