Raphael Gamaliel Warnock (born July 23, 1969) is an American pastor and politician serving as senior pastor of Ebenezer Baptist Church in Atlanta, and as the junior United States senator from Georgia since 2021. A member of the Democratic Party, he assumed office on January 20, 2021.[1][2]

Warnock was the senior pastor of Douglas Memorial Community Church until 2005, when he became senior pastor of Ebenezer Baptist Church in Atlanta. He came to prominence in Georgia politics as a leading activist in the campaign to expand Medicaid under the Affordable Care Act. Warnock defeated incumbent Kelly Loeffler in the runoff in Georgia's 2020–21 United States Senate special election on January 5, 2021. The same day, fellow Democrat Jon Ossoff won the runoff for Georgia's other Senate seat against Republican David Perdue.

Warnock and Ossoff are the first Democrats elected to the U.S. Senate from Georgia since Zell Miller in 2000. Warnock is the first African American to represent Georgia in the Senate and the first African-American Democrat elected to a Senate seat by a former state of the Confederacy.[3]

Warnock was born in Savannah, Georgia on July 23, 1969.[4] He grew up in public housing as the eleventh of twelve children born to Verlene and Jonathan Warnock, both Pentecostal pastors.[5] His father served in the U.S. Army during World War II, where he learned automobile mechanics and welding, and subsequently opened a small car restoration business where he restored junked cars for resale.[6]

In the 1990s, Warnock served as the youth pastor and then assistant pastor at Abyssinian Baptist Church in New York.[12][13] While Warnock was pastor at Abyssinian, the church declined to hire workfare recipients as part of organized opposition to then-mayor Rudy Giuliani's workfare program.[14] The church also hosted Fidel Castro on October 22, 1995, while Warnock was the youth pastor there. There is no evidence Warnock was involved in that decision. His campaign, during the 2020-21 United States Senate special election in Georgia, refused to say whether Warnock attended the event.[15]

In the 2000s, Warnock was senior pastor at Douglas Memorial Community Church in Baltimore, Maryland. Warnock and an assistant minister were arrested and charged with obstructing a police investigation into suspected child abuse at a summer camp run by Warnock's church, Douglas Memorial Community Church. The police report called Warnock "extremely uncooperative and disruptive". Warnock had demanded that the counselors have lawyers present when being interviewed by police.[16][17] The charges were later dropped with the deputy state's attorney's acknowledgment that it had been a "miscommunication", adding that Warnock had aided the investigation and that prosecution would be a waste of resources.[18][19] Warnock said he was merely asserting that lawyers should be present during the interviews[20] and that he had intervened to ensure that an adult was present while a juvenile suspect was being questioned.[21]

In 2005, Warnock became senior pastor of the Ebenezer Baptist Church in Atlanta, Georgia, Martin Luther King Jr.'s former congregation; he is the fifth and the youngest person to serve as Ebenezer's senior pastor since its founding.[7][22][23] Warnock has stated that he will continue in the post while serving in the Senate.[24]

As pastor, Warnock advocated for clemency for Troy Davis, who was executed in 2011.[25] In 2013, he delivered the benediction at the public prayer service at the second inauguration of Barack Obama.[26] After Fidel Castro died in 2016, Warnock told his church to pray for the Cuban people, calling Castro's legacy “complex, kind of like America’s legacy is complex.”[15] In March 2019, Warnock hosted an interfaith meeting on climate change at his church, featuring Al Gore and William Barber II.[27]

On Easter Sunday 2021, Warnock's Twitter account tweeted, "The meaning of Easter is more transcendent than the resurrection of Jesus Christ. Whether you are a Christian or not, through a commitment to helping others we are able to save ourselves." Many prominent Christians and political commenters spoke against the tweet, including Benjamin Watson, Allie Beth Stuckey, and Jenna Ellis, who called it "heretical." The tweet was deleted that afternoon, with a spokesperson for Warnock saying, "the tweet was posted by staff and was not approved" but declining to say whether it reflected Warnock's beliefs.[29][30] 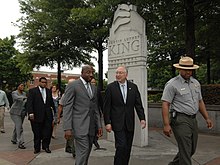 Warnock with Secretary of the Interior Ken Salazar at the Martin Luther King Jr. National Historical Park in 2009

Warnock came to prominence in Georgia politics as a leader in the campaign to expand Medicaid in the state.[31] In March 2014, Warnock led a sit-in at the Georgia State Capitol to press state legislators to accept the expansion of Medicaid offered by the Patient Protection and Affordable Care Act.[32] He and other leaders were arrested during the protest.[32][33] Warnock also actively campaigned for Georgia Democrats to increase outreach to low-income communities.[34] In 2015, Warnock considered running in the 2016 election for the United States Senate seat held by Johnny Isakson as a member of the Democratic Party.[35] He opted not to run.[36][37]

Warnock supports expanding the Affordable Care Act and has called for the passage of the John Lewis Voting Rights Act.[39][31] He also supports increasing COVID-19-relief funding.[40] A proponent of abortion rights and gay marriage, he has been endorsed by Planned Parenthood.[41][42] He opposes the concealed carry of firearms, saying that religious leaders do not want guns in places of worship.[43] Warnock has long opposed the death penalty, having advocated for death row inmate Troy Davis, who was executed in 2011 for killing a police officer despite evidence that supported his innocence.[44][45]

The closing argument of Warnock's campaign focused on the $2,000 stimulus payments that he and Ossoff would approve if they were elected, giving Democrats a Senate majority.[52]

In the January 5 runoff election, Warnock defeated Loeffler with 51% of the popular vote. With this victory, he made history by becoming the first Black senator from Georgia.[53] On January 7, Loeffler conceded to Warnock.[54] The election result was certified on January 19.[55] Unlike Ossoff, Warnock will have to defend his seat in 2022, when Isakson's term was originally set to expire, in order to win a full 6-year term from 2023 to 2029.[56] 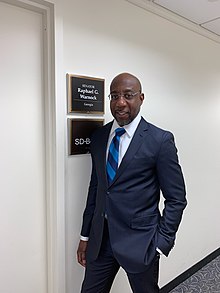 Warnock outside his Senate office, shortly after being sworn in

On January 20, 2021, Warnock was sworn into the United States Senate in the 117th Congress by Vice President Kamala Harris. He has voted to confirm all of President Joe Biden's nominees, starting with Avril Haines for Director of National Intelligence on January 20, 2021,[58] and most recently David Turk for Deputy Secretary of Energy on March 24, 2021.[59][60] Warnock voted to convict former President Donald Trump for his role in inciting the Capitol riots on February 13, 2021.[58] On March 5, 2021, he co-sponsored an amendment to raise the minimum wage to $15 an hour, along with 29 other Democratic and Independent Senators.[61] On March 17, 2021, he delivered his first speech on the Senate floor in support of the passage of the For the People Act and the John Lewis Voting Rights Act.[62] 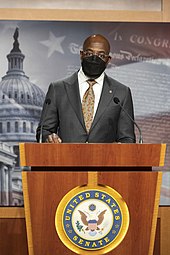 Warnock speaks on a COVID relief bill in 2021

Warnock has described himself as a "pro-choice pastor."[67]

In December 2020, during Warnock's Senate campaign, a group of 25 Black ministers wrote him an open letter asking him to reconsider his abortion stance, calling it "contrary to Christian teachings" and saying abortion disproportionately affects African Americans. The Warnock campaign responded with a statement, writing that "Warnock believes a patient's room is too small a place for a woman, her doctor, and the US government and that these are deeply personal health care decisions - not political ones."[68] The language matched a statement from a debate a few days before the original letter, in which Warnock said:

I have a profound reverence for life and an abiding respect for choice. The question is: whose decision is it? And I happen to think that a patient's room is too small a place for a woman, her doctor and the U.S. government. I think there's too many people in the room. But those who are concerned about life, and I certainly am, ought to be focused on the incredibly high rates of infant mortality and maternal mortality in our country, when compared to other developed nations. That's something that government could work on. And I've been working on it my entire career.[68]

Warnock received a grade of "F" from the National Rifle Association Political Victory Fund during his Senate campaign. The NRA accused him of supporting the criminalization of private gun transfers and banning standard issue magazines, and endorsed Loeffler.[70] In 2014, Warnock gave a sermon in which he criticized Georgia's gun laws, saying that "somebody decided that they had the bright idea to pass a piece of legislation that would allow guns and concealed weapons to be carried in churches. Have you ever been to a church meeting?... Whoever thought of that had never been to a church meeting."[71] The NRA tweeted out the video, adding the caption "Rev. Warnock, Law-Abiding Americans Defending Themselves is No Laughing Matter". The NRA added that "LAUGHING at church-goers who defend themselves with guns. First Warnock goes after our veterans, now our Second Amendment."[72]

Warnock criticized Trump's "shithole countries" comment in 2018 and his subsequent signing of a proclamation honoring Martin Luther King Jr., saying, "I would argue that a proclamation without an apology is hypocrisy. There is no redemption without repentance and the president of the United States needs to repent."[73]

Warnock supports the Equality Act, which would prohibit discrimination on the basis of sex, gender identity, and sexual orientation.[74]

Warnock twice declined to answer when asked whether he supported "packing the Supreme Court" by adding additional justices during a December 2020 debate.[75]

On March 17, 2021, Warnock said in a Senate floor speech that voting rights were under attack at a rate not seen since the Jim Crow era.[76][77] On April 20, 2021, Warnock and voting rights activist Stacey Abrams testified before the Senate Judiciary Committee in favor of passing the John Lewis Voting Rights Act and For the People Act. He was again critical of the new election laws passed in his home state, calling it a "full-fledged assault on voting rights, unlike anything we seen since the era of Jim Crow."[78]

Warnock married Oulèye Ndoye in a public ceremony on February 14, 2016; the couple had held a private ceremony in January.[8][81] They have two children. The couple separated in November 2019, and their divorce was finalized in 2020.[12] According to a police report, Ndoye accused Warnock of running over her foot with his car while trying to escape a heated argument about visiting relatives, but medical professionals found no signs of injury.[82] Body camera footage of a police interview during the incident was made public before the runoff election.[83]