Perseverance has a similar design to its predecessor rover, Curiosity, from which it was moderately upgraded; it carries seven primary payload instruments, 19 cameras, and two microphones.[7] The rover is also carrying the mini-helicopter Ingenuity, an experimental aircraft that will attempt the first powered flight on another planet.

The rover's goals include identifying ancient Martian environments capable of supporting life, seeking out evidence if microbial life existed in those environments, collecting rock and soil samples to store on the Martian surface, and testing oxygen production from the Martian atmosphere to prepare for future crewed missions.[8]

The Perseverance rover has four science objectives that will support the Mars Exploration Program's science goals:[8] 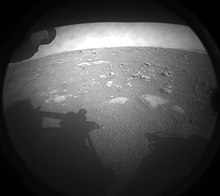 Despite the high-profile success of the Curiosity rover landing in August 2012, NASA's Mars Exploration Program was in a state of uncertainty in the early 2010s. Budget cuts forced NASA to pull out of a planned collaboration with the European Space Agency which included a rover mission.[9] By the summer of 2012, a program that had been launching a mission to Mars every two years suddenly found itself with no missions approved after 2013.[10]

In 2011, the Planetary Science Decadal Survey, a report from the National Academies of Sciences, Engineering, and Medicine containing an influential set of recommendations made by the planetary science community, stated that the top priority of NASA's planetary exploration program in the decade between 2013 and 2022 should be to begin a Mars Sample Return campaign, a three-mission project to collect, launch, and safely return samples of the Martian surface to Earth. The report stated that NASA should invest in a sample-caching rover as the first step in this effort, with the goal of keeping costs under US$2.5 billion.[11]

After the success of the Curiosity rover and in response to the recommendations of the decadal survey, NASA announced its intent to launch a new Mars rover mission by 2020 at the American Geophysical Union conference in December 2012.[12]

Though initially hesitant to commit to an ambitious sample-caching capability (and subsequent follow-on missions), a NASA-convened science definition team for the Mars 2020 project released a report in July 2013 that the mission should "select and store a compelling suite of samples in a returnable cache."[13]

Perseverance in the Jet Propulsion Laboratory near Pasadena, California

The Perseverance design evolved from its predecessor, the Curiosity rover. The two rovers share a similar body plan, landing system, cruise stage, and power system, but the design was improved in several ways for Perseverance. Engineers designed the rover wheels to be more robust than Curiosity's wheels, which have sustained some damage.[14] Perseverance has thicker, more durable aluminum wheels, with reduced width and a greater diameter (52.5 cm (20.7 in)) than Curiosity's 50 cm (20 in) wheels.[15][16] The aluminum wheels are covered with cleats for traction and curved titanium spokes for springy support.[17] Like Curiosity, the rover includes a robotic arm, although Perseverance's arm is longer and stronger, measuring 2.1 m (6 ft 11 in). The arm hosts an elaborate rock-coring and sampling mechanism to store geologic samples from the Martian surface in sterile caching tubes.[18]

The rover's radioisotope thermoelectric power generator (MMRTG) has a mass of 45 kg (99 lb) and uses 4.8 kg (11 lb) of plutonium-238 oxide as its power source. The natural decay of plutonium-238, which has a half-life of 87.7 years, gives off heat which is converted to electricity—approximately 110 watts at launch.[20] This will decrease over time as its power source decays.[20] The MMRTG charges two lithium-ion rechargeable batteries which power the rover's activities, and must be recharged periodically. Unlike solar panels, the MMRTG provides engineers with significant flexibility in operating the rover's instruments even at night, during dust storms, and through winter.[20]

The rover's computer uses the BAE Systems RAD750 radiation-hardened single board computer based on a ruggedized PowerPC G3 microprocessor (PowerPC 750). The computer contains 128 megabytes of volatile DRAM, and runs at 133 MHz. The flight software runs on the VxWorks Operating System, is written in C and is able to access 4 gigabytes of NAND non-volatile memory on a separate card.[21] Perseverance relies on three antennas for telemetry, all of which are relayed through craft currently in orbit around Mars. The primary Ultra high frequency (UHF) antenna can send data from the rover at a maximum rate of two megabits per second.[22] Two slower X-band antennas provide communications redundancy.

Perseverance has a twin rover used for testing and problem solving, Optimism (operational Perseverance twin for integration of mechanisms and instruments sent to Mars), a vehicle system test bed (VSTB). It is housed at the JPL Mars Yard for problem solving on simulated Mars terrain.[23]

Also traveling with Perseverance is the Mars helicopter experiment named Ingenuity. This solar-powered helicopter drone has a mass of 1.8 kg (4.0 lb). It will demonstrate flight stability and the potential to scout for ideal driving routes for the rover over its planned 30-Martian-day (31-Earth-day) experimental flight test window. If Ingenuity survives its first cold Martian nights, where temperatures dip as low as −90 °C (−130 °F), the team will proceed with the first powered flight of an aircraft on another planet.[24][25] Other than a camera, it carries no scientific instruments.[26][27][28]

NASA's Thomas Zurbuchen announced the rover's official name, Perseverance, on 5 March 2020, at Lake Braddock Secondary School in Burke, Virginia. Zurbuchen made the final selection following a 2019 nationwide naming contest that drew more than 28,000 essays by K-12 students from every U.S. state and territory.

Mather wrote in his winning essay:

Curiosity. InSight. Spirit. Opportunity. If you think about it, all of these names of past Mars rovers are qualities we possess as humans. We are always curious, and seek opportunity. We have the spirit and insight to explore the Moon, Mars, and beyond. But, if rovers are to be the qualities of us as a race, we missed the most important thing. Perseverance. We as humans evolved as creatures who could learn to adapt to any situation, no matter how harsh. We are a species of explorers, and we will meet many setbacks on the way to Mars. However, we can persevere. We, not as a nation but as humans, will not give up. The human race will always persevere into the future.[29]

The rover took about seven months to travel to Mars and made its landing in Jezero Crater on 18 February 2021, to begin its science phase.[31]

Diagram illustrating the locations of scientific instruments aboard Perseverance

NASA considered nearly 60 proposals[33][34] for rover instrumentation. On 31 July 2014, NASA announced the seven instruments that would make up the payload for the rover:[35][36]

Are we alone? We came here to look for signs of life, and to collect samples of Mars for study on Earth. To those who follow, we wish a safe journey and the joy of discovery.[46]

An L-shaped bracket close by has a secondary target with grayscale and colored ceramic squares.

There are additional cameras and two audio microphones (the first working microphones on Mars), that will be used for engineering support during landing,[49] driving, and collecting samples.[50]

The parachute descent of the Perseverance rover was photographed by the HiRISE high resolution camera of the Mars Reconnaissance Orbiter (MRO).

Upon landing, Perseverance immediately began to send images of its surrounding area, in front of and behind the rover using its onboard Hazard Avoidance Cameras.[51]

Perseverance is planned to visit the bottom and upper parts of the 3.8-3.4 billion-year-old Neretva Vallis delta, the smooth and etched parts of the Jezero crater floor deposits interpreted as volcanic ash or aeolian airfall deposits, emplaced before the formation of the delta; the ancient shoreline covered with Transverse Aeolian Ridges (dunes) and mass wasting deposits, and finally, it is planned to climb onto the Jezero crater rim.[citation needed] 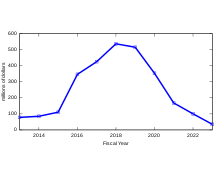 NASA plans to invest roughly US$2.75 billion in the project over 11 years, including US$2.2 billion for the development and build of the hardware, US$243 million for launch services, and US$291 million for 2.5 years of mission operations.[7][52]

Adjusted for inflation, Perseverance is NASA's sixth-most expensive robotic planetary mission, though it is cheaper than its predecessor, Curiosity.[53] Perseverance benefited from spare hardware and "build-to print" designs from the Curiosity mission, which helped reduce development costs and saved "probably tens of millions, if not 100 million dollars" according to Mars 2020 Deputy Chief Engineer Keith Comeaux.[54]

Commemorative and other plates

"Send Your Name to Mars"

NASA's "Send Your Name to Mars" campaign invited people from around the world to submit their names to travel aboard the agency's next rover to Mars. 10,932,295 names were submitted. The names were etched by an electron beam onto three fingernail-sized silicon chips, along with the essays of the 155 finalists in NASA's "Name the Rover" contest. The first name to be engraved was "Angel Santos." The three chips share space on an anodized plate with a laser engraved graphic representing Earth, Mars, and the Sun. The rays emanating from the Sun contain the phrase "Explore As One" written in Morse code.[55] The plate was then mounted on the rover on 26 March 2020.[56]

A sample of a souvenir boarding pass for those who registered their names to be flown aboard the Perseverance rover as part of the "Send Your Name to Mars" campaign.

Part of Perseverance's cargo is a geocaching trackable item viewable with the SHERLOC's WATSON camera.[57]

In 2016, NASA SHERLOC co-investigator Dr. Marc Fries — with help from his son Wyatt — was inspired by Geocaching's 2008 placement of a cache on the International Space Station to set out and try something similar with the rover mission. After floating the idea around mission management, it eventually reached NASA scientist Francis McCubbin, who would join the SHERLOC instrument team as a collaborator to move the project forward. The Geocaching inclusion was scaled-down to a trackable item that players could search for from NASA camera views and then log on the site.[58]

In a manner similar to the "Send Your Name to Mars" campaign, the geocaching trackable code was carefully printed on a one-inch, polycarbonate glass disk that serves as part of the rover's calibration target. It will serve as an optical target for the WATSON imager and a spectroscopic standard for the SHERLOC instrument. The disk is made of a prototype astronaut helmet visor material that will be tested for its potential use in manned missions to Mars. Designs were approved by the mission leads at NASA's Jet Propulsion Laboratory (JPL), NASA Public Affairs, and NASA HQ, in addition to Groundspeak Geocaching HQ.[59][60]

Perseverance launched during the COVID-19 pandemic, which began to affect the mission planning in March 2020. To show appreciation for healthcare workers who helped during the pandemic, an 8 cm × 13 cm (3.1 in × 5.1 in) plate with a staff-and serpent symbol was placed on the rover. The project manager, Matt Wallace, said he hoped that future generations going to Mars would be able to appreciate healthcare workers during 2020.[61] 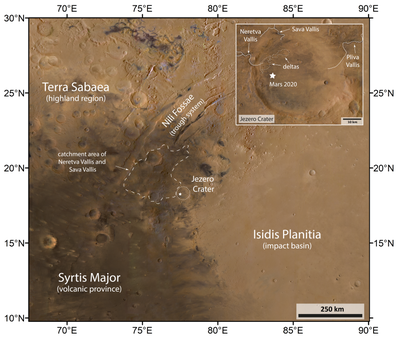 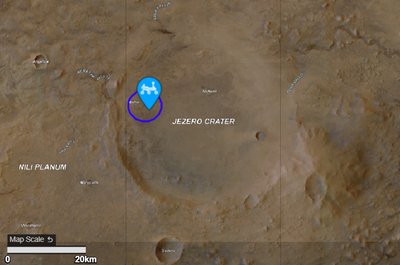 Position of Perseverance and its landing ellipse in Jezero crater

Perseverance has not yet taken any selfies. To do this, it would use a camera on its arm.