Penny debate in the United States 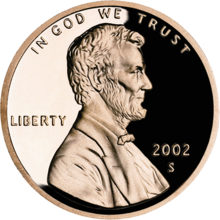 A debate exists within the United States government and American society at large over whether the one-cent coin, the penny, should be eliminated as a unit of currency in the United States. The penny costs more to produce than the one cent it is worth, meaning the seigniorage is negative – the government loses money on every penny that is created. Several bills introduced in the U.S. Congress would have ceased production of pennies, but none have been approved. Such bills would leave the five-cent coin, or nickel, as the lowest-value coin minted in the United States.

Other countries have also withdrawn coins no longer worth producing, such as Canada ending production of the Canadian penny in 2012. The most recent time that the United States withdrew a coin from circulation was with the half-cent coin (hay-penny), which was withdrawn in 1857; the 1857 half-cent coin was worth approximately 14 cents in modern US dollars.

In 2017, Senator John McCain [R-AZ] and Senator Mike Enzi [R-WY] introduced S. 759, the Currency, Optimization, Innovation, and National Savings (C.O.I.N.S.) Act of 2017, that would stop minting of the penny for 10 years and would study the question of whether production could cease thereafter. The bill died at the end of the 115th Congress with no hearings held by the Senate Committee on Banking, Housing, and Urban Affairs.[5]

As of 2018, nickels cost $0.0753 (equivalent to $0.0776 in 2020) to produce and distribute,[29] providing an argument for elimination similar to the penny's production at a loss. The current face value of a nickel is also well below that which the lowest-denomination coin (the penny) held at the time of the half-cent's elimination in 1857.[19]

Economist François R. Velde suggested in 2007 that the government make the penny worth five cents. This change would add about $6 billion to the money supply, .[33]

Congress passed the Coin Modernization, Oversight, and Continuity Act of 2010, which requires the Treasury to report on possible new metallic coin materials.[34] In the 2014 Biennial Report, Appendix 4, the Mint reported that the previous study had "found that there was no more-cost-effective alternative material for the one-cent, and thus recommended that it remain unchanged."[35]

Precedents in other countries

Many countries outside the United States have chosen to remove low-value coins from circulation:

However, many nations still use coins of similar or smaller value to the United States cent. In some cases, while the nominal value of the coin may be smaller than that of a US cent, the purchasing power may be higher:

Laws regarding melting and export

On April 17, 2007, a Department of the Treasury regulation went into effect prohibiting the treatment, melting, or mass export of pennies and nickels. Exceptions were allowed for numismatists, jewelry makers, and normal tourism demands.[44] The reason given was that the price of copper was rising to the point where these coins could be profitably melted for their metal content.[45] In 1969, a similar law regarding silver coinage was repealed. Because their silver content frequently exceeds collector value, silver coins are often sold by multiplying their "face value" times a benchmark price that floats relative to the spot silver price per ounce.[46] According to American law, US citizens are allowed to melt foreign coinage (e.g., Canadian pennies) for personal or commercial use; however, by doing so they are usually violating the laws of the country that issued the coinage in question.[47]