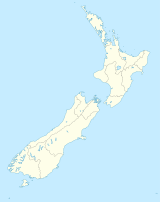 Pelorus Jack (fl. 1888 – April 1912) was a Risso's dolphin that was famous for meeting and escorting ships through a stretch of water in Cook Strait, New Zealand, for 24 years between 1888 and 1912. Pelorus Jack was usually spotted in Admiralty Bay between Cape Francis and Collinet Point, near French Pass, a notoriously dangerous channel used by ships travelling between Wellington and Nelson.[1][2]

How he got his name is uncertain. It is recorded in the book Breverton's nautical curiosities : a book of the sea that he was named after the pelorus, a marine navigational instrument.[3] However, Te Ara - the Encyclopedia of New Zealand, says the name came from Pelorus Sound because it was at the entrance to that stretch of water where he would regularly meet ships to accompany them.[4]

Pelorus Jack was shot at from a passing ship, and was later protected by a 1904 New Zealand law.[5]

Pelorus Jack was approximately 4 metres (13 ft) long and was of a white color with grey lines or shadings, and a round, white head.[6] Although its sex was never determined, it was identified from photographs as a Risso's dolphin, Grampus griseus. This is an uncommon species in New Zealand waters, and only 12 Risso's dolphins have been reported in that area.[7][8]

Pelorus Jack. Photographed by A. Pitt.

Pelorus Jack guided the ships by swimming alongside a water craft for 20 minutes at a time. If the crew could not see Jack at first, they often waited for him to appear.

Despite his name, he did not live in nearby Pelorus Sound; instead, he would often guide ships through dangerous passages of French Pass. However, some local residents familiar with his habits claim that he never went through French Pass itself but stayed near the Chetwode Islands.[9][10]

Pelorus Jack was first seen around 1888 when it appeared in front of the schooner Brindle when the ship approached French Pass, a channel located between D'Urville Island and the South Island. When the members of the crew saw the dolphin bobbing up and down in front of the ship, they wanted to kill him, but the captain's wife talked them out of it. To their amazement, the dolphin then proceeded to guide the ship through the narrow channel. And for years thereafter, he safely guided almost every ship that came by. With rocks and strong currents, the area is dangerous to ships, but no shipwrecks occurred when Jack was present.[11]

Many sailors and travellers saw Pelorus Jack, and he was mentioned in local newspapers and depicted in postcards.

Jack was last seen in April 1912. There were various rumours connected to his disappearance, including fears that foreign whalers might have harpooned him. However, research suggests that Pelorus Jack was an old animal; his head was white and his body pale, both indications of age, so it is likely that he died of natural causes.[7]

Since 1989, Pelorus Jack has been used as a symbol for the Interislander, a ferry service across the Cook Strait, and is incorporated into the livery of the ships in the fleet.[12]

In 1904, someone aboard the SS Penguin tried to shoot Pelorus Jack with a rifle. Despite the attempt on his life, Pelorus Jack continued to help ships. According to folklore, however, he no longer helped the Penguin, which shipwrecked in Cook Strait in 1909.[5][13][14]

Following the shooting incident, a law was proposed to protect Pelorus Jack. He became protected by Order in Council under the Sea Fisheries Act on 26 September 1904. Pelorus Jack remained protected by that law until his disappearance in 1912.[5][8][15] It is believed that he was the first individual sea creature protected by law in any country.[9][10]

In 1945, when Bob Lowry founded his new press, Pelorus Press, in Auckland, his printer's device was a dolphin, referencing 16th century Venetian printer Aldus Manutius, and he named the press after Pelorus Jack. "It was a happy thought to maintain the old dolphin tradition. What more inevitable then . . . than Pelorus Jack of the Sounds?'[16]

Kipa Hemi Whiro, "kaumata" of Ngāti Kuia is reported in 1913 as being "very positive in his belief" that Pelorus Jack was "the self-same fish of ancient days", Kaikai-a-waro, a sea-god or taniwha who had guided his ancestor Matua-hautere across Cook Strait from the North Island to settle in the South Island many generations earlier.[8]

"Pelorus Jack" is a Scottish Country dance,[17] named in honour of the dolphin. This dance features a set of alternating tandem half-reels (or heys) where two people act as one but swap who leads at the reel ends, this is now known as a Dolphin Reel.[18]

Arthur Ransome mentions Pelorus Jack as accompanying ships and receiving protection in his 1932 novel Peter Duck. However, the character of Peter Duck incorrectly locates the dolphin as living in Sydney Harbour.[19] Singer/Songwriter Andrea Prodan tells the tale of the dolphin in the song 'Pelorus Jack' in his 1996 all-vocal record Viva Voce.

Two bulldogs, named Pelorus Jack I (1913-1916) and Pelorus Jack II (1916-1919), served as mascots of HMS New Zealand, the battlecruiser that the New Zealand government paid to have built for the Royal Navy.[20]