Patrik Schick (born 24 January 1996) is a Czech professional footballer who plays as a forward for Bundesliga club Bayer Leverkusen and the Czech Republic national team.

The Prague-born forward's talent was spotted by Sparta Prague when Schick was just 11 years old.[3] He made his top-flight debut for Sparta on 3 May 2014 in a 3–1 away loss at Teplice. Sparta would win the domestic double that campaign but four appearances over two campaigns meant Schick crossed town to join Bohemians 1905 on loan for the 2015–16 season.[3][4] He scored 8 goals in 27 outings for Bohemians and his good form on loan earned him his first call up to the Czech Republic national team.[5]

Schick signed for Sampdoria in June 2016 for a reported fee of €4 million.[6] In his first season in Italy, he appeared in 32 league matches and scored 11 goals for Sampdoria.[5] He started only 14 times but was able to find the back of the net once every 137 minutes.[5]

In May 2017, he refused to extend his contract, expecting a transfer to another club.[7] In June 2017, Juventus triggered the release clause of a reported €30 million on Schick's contract.[8] However, Schick failed two separate medicals and Juventus backed out of the deal on 18 July.[9][10]

On 29 August 2017 Schick joined Roma on a temporary deal for a loan fee of €5m, with a conditional obligation to buy the player once certain sporting objectives had been achieved, for an initial fee of €9m, plus bonuses of €8m.[11] Upon signing, Roma sporting director Monchi described Schick as "one of the brightest prospects in international football."[12] Schick's first two years at Roma were disappointing, often playing out on the right wing or left up front by himself, and he scored only 8 times in 58 games.[12]

On 2 September 2019, RB Leipzig announced the signing of Schick on a season-long loan deal with an option to buy him permanently.[13] His first goal for Leipzig came in a 3–2 defeat of SC Paderborn on 11 November 2019.[14] This started a run of three goals in four league appearances, including coming off the bench to complete the comeback and secure a 3–3 draw with Borussia Dortmund.[3][15] Alongside prolific goalscorer Timo Werner, Schick rekindled his form with 10 goals in 28 games for Leipzig as the club finished in third place in the Bundesliga and reached the semi-finals Champions League.[12][16]

On 8 September 2020, Schick joined Bayer Leverkusen on a five-year deal for a reported fee of €26.5 million plus bonuses.[17] Schick scored his first goal in a UEFA competition on 26 November 2020, coming in a 4–1 win over Israeli side Hapoel Be'er Sheva in the group stage of the Europa League.[18]

Schick was the preferred centre-forward for much of the 2020–21 campaign at the BayArena and finished with 9 strikes across 29 league games.[3]

Schick was called up to the Czech Republic senior side for the first time at their pre-UEFA Euro 2016 training camp.[5]

On 25 May 2021, Schick was included in the final 26-man squad for the postponed UEFA Euro 2020 tournament.[19] In the Czech Republic's first group stage match against Scotland on 14 June at Hampden Park in Glasgow, Schick scored twice, including a goal from the halfway line as the Czechs won 2–0.[20] The strike was the longest-recorded goal at the Euros since 1980 at 49.7 yards (or 45 meters).[20][21] He became the first Czech player since Tomáš Rosický at the 2006 FIFA World Cup to score a brace at a major tournament and the first since Milan Baroš in 2004 to do so at the European Championships.[20][22]

Regarded as a promising young player in the media,[23][24] Schick is a tall and physically strong yet elegant left-footed forward, with an eye for goal.[25][26] Although he usually plays in a central role as a main striker, he is also capable of playing as a second striker, or as a right winger.[26][25][27] A quick, powerful, hard-working, and agile player, he is known for his ability to utilise his physique to hold up the ball with his back to goal, but also possess excellent technique and dribbling skills, as well as good link-up play, which enables him to play the ball first time, participate in the build-up of attacking plays, and provide assists for teammates.[26][27] 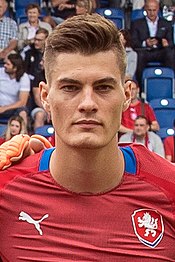 Schick with the Czech Republic in 2018