South Korean actress and singer (born 1990)
In this Korean name, the family name is Park.

Park was born on February 18, 1990, in Gwangju and grew up in Songpa District, Seoul. She has an older brother, Park Shin-won, a guitarist and composer.[5] Park made her first appearance in the music video "Flower" by singer Lee Seung-hwan,[6] then underwent formal training in singing, dancing and acting.[7]

After graduating from Youngpa Girls' High School, Park attended Chung-Ang University. She studied there for eight years, then graduated with a degree in Theater in February 2016.[8][9] Park received a service award at the convocation ceremony for her achievement as an artist ambassador for the university.[10]

Park became known when she played the younger version of Choi Ji-woo's character in the popular Korean drama Stairway to Heaven in 2003.[11] Thereafter she expanded her filmography through supporting roles in several television series, most notably as a rebellious teenager in the drama special Very Merry Christmas in 2004.[12]

Park was cast in her first adult leading role in the South Korean-Japanese melodrama Tree of Heaven (2006), where she received praise from critics for her performance.[13] The series was also aired in Japan, thus giving Park more exposure abroad.[14]

Park made her film debut in the movie Evil Twin (2007), a summer horror flick where she portrayed two roles: one as the main character, and the other as the ghost of the main character's sister, who haunts the other sister after her death.[15] She then played her first antagonist role in romance comedy series Prince Hours, a spin-off to Princess Hours (2006);[16][17] and starred in the weekend drama Kimcheed Radish Cubes as the female lead.[18]

Aside from acting, Park also hosted the variety program Fantastic Partner from 2006 to 2007,[19] for which she was awarded Best Newcomer in a Variety Show at the MBC Entertainment Awards.[20] 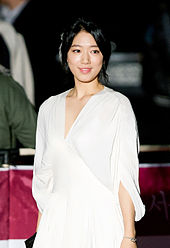 Park gained more recognition after starring as a cross-dressing heroine in the romance comedy music drama You're Beautiful (2009) alongside Jang Keun-suk.[21][22] Despite average ratings in South Korea, the series gained a cult following,[23] and earned high ratings in Japan.[24][25] She released the songs "Lovely Day" and "Without Words" for the drama's original soundtrack.[26]

In 2010, Park starred in the low-budget romantic comedy film Cyrano Agency, which revolved around a dating agency that helps its customers win the hearts of the people they desire.[27] The sleeper hit became a critical and commercial success, attracting 2.7 million admissions nationwide, becoming the 8th best selling film of the year.[28] Park won the "Most Popular Actress" award in film category at the Baeksang Arts Awards.[29] Park also voiced the main character of the animation film Green Days: Dinosaur and I, which premiered at the 15th Busan International Film Festival and received positive reviews.[30][31]

Park then starred in MBC's youth melodrama Heartstrings (2011) opposite Jung Yong-hwa.[32][33] With You're Beautiful and Heartstrings, Park experienced a rise in popularity in Japan,[34] and signed an exclusive contract with Japanese management agency IMX.[35] The same year, Park starred in her first Taiwanese drama, Hayate The Combat Butler, based on the Japanese shōnen manga of the same name.[36][37] She received the Popular Asian Star award at the LeTV Movie and Drama Awards.[38]

In 2012, Park was cast in the third season of KBS drama special, Don't Worry, I'm a Ghost which was broadcast on July 15.[39] Her performance in the drama won her the Best One-Act Special Actress Award at the 2012 KBS Drama Awards.[40] The same year, Park joined the reality show Music and Lyrics, where she collaborated with singer Yoon Gun to compose a song titled "I Think of You".[41] Park was then cast in the third installment of tvN's "Flower Boy" series entitled My Cute Guys along with actor Yoon Shi-yoon, which premiered in January 2013.[42][43] 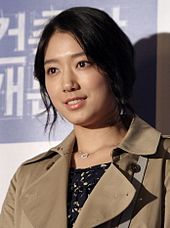 In 2013, Park featured in the comedy drama film, Miracle in Cell No. 7,[44] which became one of the highest grossing Korean films.[45] She went on to win the "Best Supporting Actress" award at the 33rd Korean Association of Film Critics Awards.[46] To celebrate her 10th anniversary as an actress, Park held the "2013 Park Shin Hye Asia Tour: Kiss Of Angel" in four Asian countries, becoming the first actress to hold a tour spanning across Asia.[47][48] She then starred in actor and singer So Ji-sub's music video "Eraser" for his album Two’clock… Playground, alongside former child actor Yoo Seung-ho.[49] The same year, Park co-starred alongside Lee Min-ho in The Heirs, a teen drama written by Kim Eun-sook.[50] The Heirs enjoyed immense popularity both locally, with a peak rating of 28.6%, and internationally, having over one billion cumulative views on the Chinese streaming website iQiyi.[51][52] Park experienced a surge in popularity domestically and internationally, and became a Hallyu star.[53][54][55] She was given the "Popular Foreign Actress" award at the 2013 Anhui TV Drama Awards.[56]

In 2014, Park played the role of the Queen in historical film The Royal Tailor.[57][58] The same year, Park starred in Pinocchio opposite actor Lee Jong-suk, playing the heroine of the drama which has a chronic symptom called "Pinocchio complex", breaking into violent hiccups when she tells lies.[59] Pinocchio became a hit,[60] earning an estimated US$5.62 million for broadcasting rights in just one year.[61] With The Heirs at the end of 2013 and Pinocchio in 2014,[62] she was included Forbes Korea's Korea Power Celebrity list where she placed 33rd.[3] In the same year, MBC's Section TV Entertainment Relay dubbed her "Nation's Little Sister".[63] Park also received the Prime Minister's Commendation at the Korea Popular Culture Awards for her contribution to Hallyu.[64][65]

In 2016, Park made her small-screen comeback in SBS' medical drama Doctors, where she played a troubled teenager who later transformed to become a successful doctor.[66] The drama was a hit and topped viewership ratings and popularity charts during its 10-week broadcast.[67][68] She then featured in the comedy film My Annoying Brother as a judo coach, alongside actor Jo Jung-suk and Do Kyung-soo of Exo.[69][70] The same year, Park was chosen as the Most Favored Korean Actress by fans of the Korean Wave in the United States.[71] Park next starred in the crime thriller film Heart Blackened, a Korean remake of the Hong Kong film Silent Witness alongside Choi Min-sik, which was released in 2017.[72][73]

In 2018, Park became a cast member of the reality show Little Cabin in the Woods produced by Na Young-seok, where she and fellow actor So Ji-sub documented their daily activities in a little house located in the Jeju forest.[74] The same year, she starred in tvN's fantasy suspense drama Memories of the Alhambra alongside Hyun Bin, playing double roles as a hostel owner, and a guitar-player NPC.[75][76] The series was a commercial success and became one of the highest rated Korean dramas in cable television history.[77]

In 2020, Park starred in the disaster film #Alive, based on the original script of Hollywood screenwriter Matt Naylor, alongside Yoo Ah-in.[78][79][80] The same year, she starred in the thriller film The Call directed by Lee Chung-hyun, which revolves around two women living in different time periods who are connected through a mysterious phone call.[81][82]

Park has become one of the most in demand endorsers after her hit drama Pinocchio (2014–2015).[83] Brands like Mamonde and Bruno Magli reportedly saw a surge in sales due to Park.[84][85] Park also endorses several international brands like Italian luxury brand Bruno Magli, French outdoor clothing brand Millet and Filipino clothing brand Bench.[86][87][88]

Since 2011, Park has set up the "Starlight Angel Project", spearheading activities to help children both at home and abroad.[124] In 2009, Park established the "Shinhye's Centre" in Ghana, which included a library and audio visual hall. A second center was built in Manila, Philippines in 2016.[125] She has a sponsored child named Abanne.[126]

On November 24, 2016, Park became the 36th inductee of the Korea Food for the Hungry International's Philanthropy Club, a select group of donors who have given at least US$85 thousand to the organization.[127]

In 2019, Park was awarded the Philanthropic Celebrity of the year at the 2019 Asia Philanthropy Awards.[130]