Olive Elaine Morris (26 June 1952 – 12 July 1979) was a Jamaican-born British-based community leader and activist in the feminist, Black nationalist, and squatters' rights campaigns of the 1970s. Morris was a key organiser in the Black Women's Movement in the United Kingdom, co-founding the Organisation of Women of African and Asian Descent in London and support groups in Manchester. She joined the British Black Panthers and squatted 121 Railton Road in Brixton.

Morris died at the age of 27. Her life and work have been widely commemorated, both by official organisations – Lambeth Council named a building after her – and by activist groups. She features on lists of inspirational Black British women and in June 2020 was brought to wider attention with a Google Doodle.

Olive Morris was born in 1952 in Harewood, St Catherine, Jamaica, to Doris Lowena (née Moseley) and Vincent Nathaniel Morris.[2] As part of the Windrush generation, the family emigrated to England when she was nine.[1] She had three brothers and two sisters, and lived in South London for most of her life,[3] attending Heathbrook Primary School, Lavender Hill Girls' Secondary School, and Tulse Hill Secondary School.[1] Leaving school without qualifications, she later studied at the London College of Printing (now named the London College of Communication).[1]

On 15 November 1969, Nigerian diplomat Clement Gomwalk was confronted by police while parked outside "Desmond's Hip City",[4] the first Black record shop in Brixton.[5] The police did not believe him when he said he was a diplomat. Accused of stealing his car under the "sus law" (suspected person), the police dragged him out of his Mercedes car to interrogate him and continued to beat him as a crowd formed around them to witness the brutality.[2] Local journalist Aymo Martin Tajo later stated that Morris "broke through the crowd to the scuffle" and "tried to physically stop the police from beating the Nigerian", the police reaction being to beat her also.[4] However, Morris's account was that she did not arrive until after the diplomat had been taken away by the police. She was then 17 years old.

The situation with the police escalated after the crowd began to confront them about their brutal treatment of Gomwalk. Morris recalled her friend being dragged by police into the record store, shouting "I've done nothing". She did not state how she got involved but does state that she was brutally beaten. As she was dressed in men’s clothes, and had very short hair, the police at that point believed she was a young man, one of them saying when challenged, "She ain’t no girl".[6] Morris’s account goes on to describe her treatment in prison. She said she was forced to strip and was threatened with rape in police custody: "They all made me take off my jumper and my bra in front of them to show I was a girl. A male cop holding a billy club said, ‘Now prove you're a real woman.’" Referencing his billy club (or baton) he stated: "Look it's the right colour and the right size for you. Black cunt!"[4]

Morris's brother Basil described her injuries from the incident, saying that he "could hardly recognize her face, they beat her so badly." She was arrested, fined £10 and given a suspended sentence. The charges were: assault on the police, threatening behaviour, and possession of dangerous weapons.[1][4]

In the early 1970s, Morris became a member of the youth section of the British Black Panther Movement (later the Black Workers movement), alongside Linton Kwesi Johnson and Clovis Reid.[1] This movement was inspired by the Black Panther Movement in the United States, but was unaffiliated with them. In August 1972 she and a friend, Liz Obi, planned to visit the American Black Panther leader Eldridge Cleaver, who was living in Algeria on the run from an attempted murder charge,[7] but they became stranded in Morocco.[1]

Morris co-founded the Brixton Black Women's Group in 1974.[1][8] Within this group, she and other members rallied to critically explore the experience of women in the Black Panther Party.[9] The overall purpose of the group was to raise consciousness so the women could communicate with each other and talk about their daily lives, putting this understanding into a political framework. The Brixton Black Women's Group pushed for more transparency and unity in their community. Eventually, the group dissolved and transformed into numerous specific groups that were focused on increasing the awareness of the Black struggle.

Morris participated in other activities, such as squatting buildings to establish self-help community spaces.[1] She squatted at 121 Railton Road, Brixton, with her friend Liz Obi in 1973. This squat became a hub of political activism and hosted community groups such as Black People against State Harassment. The building was also the site of the Sabarr Bookshop, one of the first Black community bookshops.[1] It was set up by a group of Black men and women in Brixton that included Morris.[10] The site subsequently became an anarchist project, known as the 121 Centre, which existed until its eviction in 1999.[1] During the 1970s she worked alongside Leila Hassan running Race Today's "Basement Sessions" at 165 Railton Road, where art, culture and politics were discussed.[11][12][13]

Morris studied at Manchester University between 1975 and 1978. Her activism did not halt while she was away from London. She co-founded the Manchester Black Women's Co-operative and the Black Women's Mutual Aid Group with activists in Manchester such as Kath Locke and Elouise Edwards.[1][14][15] She also helped to establish a supplementary school after campaigning with local Black parents for better education provision for their children.[16]

Organisation of Women of African and Asian Descent

She was a founding member of the Organisation of Women of African and Asian Descent (OWAAD) in London. OWAAD held its first conference at the Abeng Centre on Gresham Road in Brixton, a centre that Morris had helped to establish along with Elaine Holness and other members of the community.[1][10][16] Along with the Brixton Black Women's Group it was the first organisation for black women in the United Kingdom.[2]

Morris became ill during a trip to Spain in 1978. When she returned to London, she was diagnosed with non-Hodgkin lymphoma. She underwent treatment, which was unsuccessful. She died on 12 July 1979 at St Thomas' Hospital, Lambeth, and was buried in Streatham Vale Cemetery. She was 27 years old.[1] 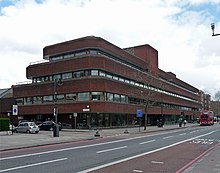 Lambeth Council named one of its key buildings after her in 1986.[17] The naming of the building followed the Brixton riot the previous year, triggered by the shooting of Cherry Groce by the police while searching for her son, Michael Groce, in connection with a firearms offence.[18] Some saw it as an attempt by the council to appease the Black community or, in a more positive spin, to show the council's future commitment to reconciliation.[4] A play area and garden was also named after Morris in Myatt's Fields.[1]

Morris is depicted on the B£1 note of the Brixton Pound, a local currency.[19] Ana Laura López de la Torre launched the "Remember Olive Morris" blog in 2007.[4] As López de la Torre started to team up with other women, the following year the Remembering Olive Collective was started,[1][3] which soon included African-American scholar Tanisha C. Ford.[4] In 2019 this was re-launched as ROC 2.0, as the council building had been scheduled for demolition, and the collective wanted to ensure that Morris would be remembered even when the building named after her is gone.[20]

The Olive Morris memorial award was launched in 2011 to give bursaries to young Black women.[1] In 2017, a huge mural entitled "Say it loud" (a reference to the song of that title) appeared in Blenheim Gardens, Brixton, part of the "WatchThisSpace" initiative; it was painted by the South African artist Breeze Yoko and draws on his character "Boniswa", while also paying homage to Morris.[21][22][23]

In 2018, in celebration of the 100th anniversary of most women gaining the right to vote, The Voice newspaper listed Olive Morris – alongside Kathleen Wrasama, Connie Mark, Fanny Eaton, Diane Abbott, Lilian Bader, Margaret Busby, and Mary Seacole – among eight Black women who have contributed to the development of Britain.[24] She was also named by the Evening Standard on a list of 14 "Inspirational Black British women throughout history" alongside Mary Seacole, Connie Mark, Margaret Busby, Diane Abbott, Claudia Jones, Adelaide Hall, Joan Armatrading, Tessa Sanderson, Doreen Lawrence, Maggie Aderin-Pocock, Sharon White, Malorie Blackman, and Zadie Smith.[25] Morris was recognised with a Google Doodle in the UK on 26 June 2020 to mark what would have been her 68th birthday.[26]