Umbrella term for gender identities
"Enby" and "Non-binary" redirect here. For the village in Estonia, see Einbi. For other uses, see Binary (disambiguation).
For no distinction between male and female gametes, see isogamy.

Non-binary people may identify as having two or more genders (being bigender or trigender);[5][6] having no gender (agender, nongendered, genderless, genderfree); moving between genders or having a fluctuating gender identity (genderfluid);[7] being third gender or other-gendered (a category that includes those who do not place a name to their gender).[8]

Gender identity is separate from sexual or romantic orientation,[9] and non-binary people have a variety of sexual orientations, just as cisgender people do.[10]

"Bigender" redirects here. For the romantic attraction to more than one gender, see Bisexual.

The term genderqueer originated in queer zines of the 1980s as a precursor to the term non-binary.[12] In addition to being an umbrella term, genderqueer has been used as an adjective to refer to any people who are perceived to transcend or divert from traditional distinctions of gender, regardless of their self-defined gender identity. Individuals may express gender non-normatively by not conforming into the binary gender categories of "man" and "woman".[13] Genderqueer is often used to self-identify by people who challenge binary social constructions of gender.[14]

The term genderqueer has also been applied by those describing what they see as a gender ambiguity.[15] Androgynous (also androgyne) is frequently used as a descriptive term for people in this category. This is because the term androgyny is closely associated with a blend of socially defined masculine and feminine traits.[16] However, not all genderqueer people identify as androgynous. Some genderqueer people identify as a masculine woman or a feminine man or combine genderqueer with another gender option.[17] Being non-binary is not the same as being intersex, and most intersex people identify as either male or female.[18] Some people use enby (from the letters 'NB') as a short form of non-binary.[19][20]

Many references use the term transgender to include genderqueer/non-binary people.[11][21][22] The Human Rights Campaign Foundation and Gender Spectrum use the term gender-expansive to convey "a wider, more flexible range of gender identity and/or expression than typically associated with the binary gender system".[23]

Agender people ('a-' meaning "without"), also called genderless, gender-free, non-gendered, or ungendered,[24][25] are those who identify as having no gender or being without a gender identity.[26][27][28] Although this category includes a broad range of identities which do not conform to traditional gender norms, scholar Finn Enke states that people who identify with any of these positions may not necessarily self-identify as transgender.[29] Agender people have no specific set of pronouns; singular they is typically used, but it is not the default.[30] Neutrois and agender were two of 50 available custom genders on Facebook, which were added on 13 February 2014.[31] Agender is also available as a gender option on OkCupid since 17 November 2014.[32]

Bigender, bi-gender, or dual gender is a gender identity that includes any two gender identities and behaviors. Identifying as bigender is typically understood to mean that one identifies as both male and female or moves between masculine gender expression and feminine gender expression, having two distinct gender identities simultaneously or fluctuating between them.[33][34][35] This is different from identifying as genderfluid, as those who identify as genderfluid may not go back and forth between any fixed gender identities and may experience an entire range or spectrum of identities over time.[36][37] The American Psychological Association describes the bigender identity as part of the umbrella of transgender identities.[38] Some bigender individuals express two distinct personas, which may be feminine, masculine, agender, androgyne, or other gender identities; others find that they identify as two genders simultaneously. A 1999 survey conducted by the San Francisco Department of Public Health observed that, among the transgender community, 3% of those who were assigned male at birth and 8% of those who were assigned female at birth identified as either "a transvestite, cross-dresser, drag queen, or a bigendered person".[39] A 2016 Harris poll conducted on behalf of GLAAD found that 1% of millennials identify as bigender.[40][41]

Demigender is a gender identity of a person identifying partially or mostly with one gender and at the same time with another gender.[42][43] There are several subcategories of the identity. A demi-boy or demi-man, for example, identifies at least partially with being a boy or a man, no matter the sex and gender they were assigned at birth, while other parts of their identity might be assigned to other genders, genderfluid or no other gender (agender). A demiflux person feels that the stable part of their identity is non-binary.[43]

Genderfluid people often express a desire to remain flexible about their gender identity rather than committing to a single definition.[44] They may fluctuate among differing gender expressions over their lifetime, or express multiple aspects of various gender markers at the same time.[44][45] A genderfluid individual may also identify as bigender – shifting between masculine and feminine; or as trigender – shifting between these and a third gender.[5][6] Pangender may be defined as being more than one gender, or it may describe a person who feels they are a member of all genders at the same time.[46]

Trigender are individuals who shift from male, female, and third gender.[48]

In 1992, after the publication of Transgender Liberation: A Movement Whose Time Has Come by Leslie Feinberg, the term transgender was broadened to become a term for gender variation in general.[49] This is highlighted in 1994, when activist Kate Bornstein wrote "All the categories of transgender find a common ground in that they each break one or more of the rules of gender: What we have in common is that we are gender outlaws, every one of us."[50]

The term genderqueer came into use during the mid-1990s among political activists.[49] Riki Anne Wilchins is often associated with the word and claims to have coined it.[51] Wilchins used the term in a 1995 essay published in the first issue of In Your Face to describe anyone who is gender nonconforming.[52][53] They were also one of the main contributors to the anthology Genderqueer: Voices Beyond the Sexual Binary which was published in 2002.[54] Wilchins stated they identify as genderqueer in their 1997 autobiography.[52]

The internet popularized the term genderqueer, as a wide audience was able to be reached very quickly.[49] In 2008, The New York Times used the word genderqueer.[55][49] In the 2010s, this term became more popularized as many celebrities publicly identified as gender nonconforming.[56] In 2012, the Intersex & Genderqueer Recognition Project was started to advocate for expanding gender options on official documentation.[57] In 2016, James Shupe was the first person to have a non-binary gender on official documents in the United States.[58] 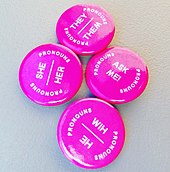 Pronoun pin badges from a 2016 art and tech festival

Some non-binary/genderqueer people use gender-neutral pronouns. Usage of singular 'they', 'their' and 'them' is the most common;[59][60] non-standard pronouns – commonly referred to as neopronouns[61] – such as xe, ze, sie, co, and ey are sometimes used as well. Some others use conventional gender-specific pronouns 'he' or 'she', alternately use 'he' and 'she', or use only their name and do not use pronouns at all.[62] Many use additional neutral language, such as the title 'Mx.'[63]

Many non-binary/genderqueer people use the gender they were given at birth to conduct everyday business, as many institutions and forms of identification – such as passports and driver's licenses – only accept, in the sense of recorded recognition, binary gender identities. However, with the increasing acceptance of non-binary gender identities and the rise in wider societal recognition, this is slowly changing, as a greater number of governments and institutions recognize and allow non-binary identities.[1]

Multiple countries legally recognize non-binary or third gender classifications. Some non-Western societies have long recognized transgender people as a third gender, though this may not (or may only recently)[64] include formal legal recognition. In Western societies, Australia may have been the first country to legally recognize a classification of sex outside of 'male' and 'female' on legal documentation, following the recognition of Alex MacFarlane's intersex status in 2003.[65] The wider legal recognition of non-binary people – following the recognition of intersex people in 2003 – in Australian law followed between 2010 and 2014, with legal action taken against the New South Wales Government Registry of Births, Deaths and Marriages by transgender activist Norrie May-Welby to recognize Norrie's legal gender identity as 'non-specific'. India's Supreme Court formally recognized transgender and non-binary people as a distinct third gender in 2014, following legal action taken by transgender activist Laxmi Narayan Tripathi.[66]

While the United States does not federally recognize a non-binary gender, in 2016 Oregon became the first state to recognize a non-binary gender identity.[67] Following Oregon, in 2017 California passed an act allowing citizens to identify as "non-binary" on official documents.[67] As of 2019, eight states have passed acts that allow "non-binary" or "X" designations on certain identifying documents.[67] One of the main arguments against the inclusion of a third gender identifier in the U.S. is that it would make law enforcement and surveillance harder, however countries that have officially recognized a third gender marker have not reported these issues.[67] In the United States there are no explicit laws to protect non-binary people from discrimination, however it is illegal for an employer to require employees to conform to sex stereotypes.[68]

Various countries throughout history have criminalized transgender and non-binary gender identities.[69][better source needed] In India, hijras and other non-binary identities were criminalized under the Criminal Tribes Act from 1871 onwards, referring to such individuals as "criminal castes."[70]

In the United States, the majority of respondents to the National Transgender Discrimination Survey chose "A gender not listed here". The "not listed here" respondents were nine percentage-points (33 percent) more likely to report forgoing healthcare due to fear of discrimination than the general sample (36 percent compared to 27 percent). Ninety percent reported experiencing anti-trans bias at work, and 43 percent reported having attempted suicide.[71] 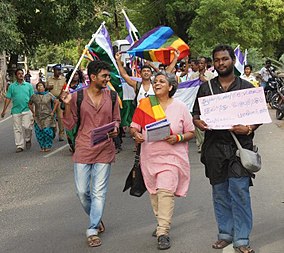 Genderfluid people, who also fall under the genderqueer umbrella, have their own flag as well. Pink represents femininity, white represents lack of gender, purple represents mixed gender or androgyny, black represents all other genders, and blue represents masculinity.[77][81]

Agender people, who also sometimes identify as genderqueer, have their own flag. This flag uses black and white stripes to represent an absence of gender, and a green stripe to represent non-binary genders.[82]

According to The Report of the 2015 U.S. Transgender Survey, 35% of the nearly 28,000 transgender respondents to the anonymous online survey identified as non-binary.[91][92]

A 2011 survey conducted by the Equality and Human Rights Commission in the UK found that 0.4% of the 10,039 respondents identified as non-binary. It does not allow inference about the share of non-binary people in the whole population, since the survey sample was not necessarily representative. The purpose of the survey was to test if respondents are willing to answer questions about their transsexual status.[93]:4-5