Nomadland is a 2020 American drama film based on the 2017 non-fiction book Nomadland: Surviving America in the Twenty-First Century by Jessica Bruder. The film is written, produced, directed, and edited by Chloé Zhao, and stars Frances McDormand (who is also a producer on the film) as a vandwelling working nomad who leaves her hometown after her husband dies and the sole industry closes down, to be "houseless" and travel around the United States. David Strathairn also stars in a supporting role. A number of real-life nomads appear as fictionalized versions of themselves, including Linda May, Swankie, and Bob Wells.

Nomadland premiered on September 11, 2020, at the Venice Film Festival, where it won the Golden Lion. It also won the People's Choice Award at the Toronto International Film Festival. It had a one-week streaming limited release on December 4, 2020, and was distributed by Searchlight Pictures in selected IMAX theaters in the United States on January 29, 2021, and simultaneously in theaters, and streaming digitally on Hulu, on February 19, 2021.

The film was praised for its direction, screenplay, editing, cinematography, and performances, especially of McDormand. It was the third-highest rated film of 2020 on Metacritic,[7] which found it to be the most frequently ranked by critics and publications as one of the best films of the year. At the 93rd Academy Awards, it won Best Picture,[8] Best Director, and Best Actress for McDormand,[9] from a total of six nominations; Zhao became the first Chinese and only the second woman ever to win Best Director, while McDormand became the first person to win Academy Awards as both producer and performer for the same film.[10] It also won Best Motion Picture – Drama and Best Director at the 78th Golden Globe Awards,[11] four awards including Best Film at the 74th British Academy Film Awards,[12] and four awards including Best Film at the 36th Independent Spirit Awards.[13]

In 2011, Fern loses her job after the US Gypsum plant in Empire, Nevada, shuts down; she had worked there for years along with her husband, who recently died. Fern decides to sell most of her belongings and purchases a van to live in and travel the country searching for work. She takes a seasonal job at an Amazon fulfillment center through the winter.

Linda, a friend and co-worker, invites Fern to visit a desert rendezvous in Arizona organized by Bob Wells, which provides a support system and community for fellow nomads. Fern initially declines but changes her mind as the weather turns cold, and she struggles to find work in the area. There, Fern meets fellow nomads and learns basic survival and self-sufficiency skills for the road.

When Fern's van blows a tire, she visits the van of a nearby nomad named Swankie to ask for a ride into town to buy a spare. Swankie chastises Fern for not being prepared and invites her to learn more road survival skills; they become good friends. Swankie tells Fern about her cancer diagnosis and shortened life expectancy and her plan to make good memories on the road rather than waste away in a hospital. They eventually part ways.

Fern later takes a job as a camp host at the Cedar Pass Campground in Badlands National Park, where she runs into Dave, another nomad she met and danced with back at the desert community. He is working temporarily at Badlands National Park, but when he falls ill with diverticulitis, Fern visits him at the hospital where he has had emergency surgery. They later take restaurant jobs at Wall Drug in South Dakota. One night Dave's son visits the restaurant looking for him, telling him that his wife is pregnant and asking him to meet his grandchild. He is hesitant, but Fern encourages him to go. Dave suggests that she come with him, but she declines.

Fern takes a new job at a sugar beet processing plant, but her van breaks down, and she cannot afford the repairs. Unable to borrow money, she visits her sister's family at their home in California. Her sister lends her the money. She questions why Fern was never around in their lives and why Fern stayed in Empire after her husband died, but she tells Fern she is brave to be so independent. Fern later visits Dave and his son's family, learning that Dave has decided to stay with them long-term. He admits feelings for her and invites her to stay with him permanently in a guest house, but she decides to leave after only a few days, heading to the ocean.

Fern returns to her seasonal Amazon job and later revisits the Arizona rendezvous. There she learns that Swankie has died, and she and the other nomads pay tribute to her life by tossing stones into the campfire. Fern opens up to Bob about her loving relationship with her late husband, and he shares the story of his son's suicide. Bob espouses the view that goodbyes are not final in the nomad community as its members always promise to see each other again "down the road."

Sometime later, Fern returns to the nearly abandoned town of Empire to dispose of the belongings she has been keeping in a storage unit. She visits the factory and the home she shared with her husband before returning to the road again. 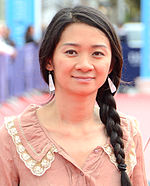 Frances McDormand and Peter Spears optioned the film rights to the book in 2017. After seeing Chloé Zhao's film The Rider at the 2017 Toronto International Film Festival, McDormand decided to approach her about the project. She and Spears met with Zhao at the 33rd Independent Spirit Awards in March 2018, and Zhao agreed to write and direct the film.[14]

Filming for Nomadland took place over four months in fall 2018, with writer-director Zhao splitting time between the set and pre-production for Eternals (2021). McDormand, Zhao, and other crew members lived out of vans over the course of production.[15] David Strathairn, and real-life nomads Linda May, Swankie, and Bob Wells, also star. Many other real-life nomads appear throughout the film. McDormand, Spears, Mollye Asher, Dan Janvey, and Zhao produced the film.[16]

Searchlight Pictures acquired the worldwide distribution rights for Nomadland in February 2019.[17] The film had its world premiere at the Venice Film Festival on September 11, 2020, and screened at the Toronto International Film Festival on the same day.[18] At Venice, the film won several awards, including the festival's top honor, the Golden Lion.[19][20] At Toronto, the film won the People's Choice Award.[21] It is the first film to win the top prize at both Venice and Toronto.[22]

In association with Searchlight, Film at Lincoln Center held exclusive virtual screenings of the film for one week only beginning on December 4, 2020, the film's initial release date before Searchlight delayed it to February 19, 2021, due to concerns of the COVID-19 pandemic.[23][24] It was released in IMAX theaters on January 29, 2021, with a wide theatrical and drive-in release in the United States on February 19, and streaming on Hulu the same day.[25] A two-week preview season in certain regions of Australia and New Zealand began on December 26, 2020, before a wider release on March 4, 2021.[26]

Internationally, the film is also available on Disney+ under the Star content hub. The release date on Star was April 9, 2021 in Canada, and April 30, 2021, in most other countries where the Star hub is available.[27][28][29] Although originally scheduled for a limited release in China starting on April 23, 2021,[30] the film has still not been shown in any theaters there.

Although Searchlight did not make the grosses of Nomadland public, sources estimated the film grossed $170,000 from its two-week IMAX run, then $503,000 from 1,175 theaters in its wide opening weekend on February 19, for a total of $673,000. Social media monitor RelishMix noted online response to the film was "mixed-to-leaning-positive" among audiences.[32] In its second weekend of wide release, the film made an estimated $330,000 from 1,200 theaters, for a four-week running total of $1.1 million.[33]

Review aggregator Rotten Tomatoes reports that 94% of 388 critic reviews were positive, with an average rating of 8.8/10. The website's critics consensus reads, "A poetic character study on the forgotten and downtrodden, Nomadland beautifully captures the restlessness left in the wake of the Great Recession."[34] According to Metacritic, which assigned it a weighted average score of 93 out of 100 based on 50 critics, the film received "universal acclaim".[35]

Writing for The Hollywood Reporter, David Rooney called the film a "powerful character study", and added, "Like Zhao's earlier work, Nomadland is an unassuming film, its aptly meandering, unhurried non-narrative layering impressions rather than building a story with the standard markers. But the cumulative effect of its many quiet, seemingly inconsequential encounters and moments of solitary contemplation is a unique portrait of outsider existence."[1] Adrian Horton of The Guardian gave the film a positive review, stating, "Nomadland has garnered industry praise as a likely frontrunner for the best picture Oscar ... The word of mouth is warranted."[36] A.O. Scott of The New York Times similarly gave a positive review, writing "It's like discovering a new country, one you may want to visit more than once."[37] Eric Kohn of IndieWire gave the film an "A–" and said, "director Chloé Zhao works magic with McDormand's face and the real world around it, delivering a profound rumination on the impulse to leave society in the dust."[38] IndieWire's poll of 231 critics included Nomadland in its Best Movies of 2020.[39]

According to Metacritic, the film was ranked the best of 2020 by critics more often than any other.[40]

Zhao and the film's success prior to and leading up to the Golden Globes and the Oscars were initially praised on Chinese social media outlets, as well as official state-controlled news media.[41][42][43]

Prior to the Oscars, owing to scrutiny on social media by some netizens in China over remarks by Zhao to Filmmaker back in 2013, where she had described China as "a place where there are lies everywhere", Nomadland's distributor pulled the film from theatrical release, and the 93rd Academy Awards was censored in China. The Oscar telecast and all discussion and footage of the ceremony or Zhao was censored by social media platforms, and the state-controlled Xinhua News Agency and People's Daily contained no reports on the ceremony or Nomadland's victory.[44][45]

Nomadland won the Golden Lion upon premiering at the Venice Film Festival, and also won the People's Choice Award at the Toronto International Film Festival.[46][47][48] It received four nominations at the 78th Golden Globe Awards, winning Best Motion Picture – Drama and Best Director; in winning the latter award, Zhao became the second woman and the first East Asian woman to do so.[11][49] It received five nominations at the 36th Independent Spirit Awards and six nominations at the 26th Critics’ Choice Awards, winning four awards including Best Picture, Best Director and Best Adapted Screenplay.[50][51] At the 27th Screen Actors Guild Awards, McDormand received a nomination for Outstanding Performance by a Female Actor in a Leading Role.[52] The film won the BAFTA Award for Best Film in 2021.[53][54] The film received six nominations at the 93rd Academy Awards, winning Best Director[55] (with Zhao becoming the second woman and first non-white woman to do so[56]), Best Picture,[57] and Best Actress awards in 2021.[58] Both the National Board of Review and the American Film Institute named Nomadland as one of the top 10 films of 2020.[59][60]