New Year's Day is a festival observed in most of the world on 1 January, the first day of the year in the modern Gregorian calendar. 1 January is also New Year's Day on the Julian calendar, but this is not the same day as the Gregorian one. Whilst most solar calendars (like the Gregorian and Julian) begin the year regularly at or near the northern winter solstice, cultures that observe a lunisolar or lunar calendar celebrate their New Year's Day (such as the Chinese New Year and the Islamic New Year) at less fixed points relative to the solar year.

In pre-Christian Rome under the Julian calendar, the day was dedicated to Janus, god of gateways and beginnings, for whom January is also named. From Roman times until the middle of the 18th century, the new year was celebrated at various stages and in various parts of Christian Europe on 25 December, on 1 March, on 25 March and on the movable feast of Easter.[2][3][4]

In the present day, with most countries now using the Gregorian calendar as their civil calendar, 1 January according to that calendar is among the most celebrated public holidays in the world, often observed with fireworks at the stroke of midnight following New Year's Eve as the new year starts in each time zone. Other global New Year's Day traditions include making New Year's resolutions and calling one's friends and family.[1]

The ancient Babylonian calendar was lunisolar, and around the year 2000 BC[5] began observing a spring festival and the new year during the month of Nisan, around the time of the March equinox. The early Roman calendar designated 1 March as the first day of the year.[6] The calendar had just 10 months, beginning with March. That the new year once began with the month of March is still reflected in some of the names of the months. September through to December, the ninth through to the twelfth months of the Gregorian calendar, were originally positioned as the seventh through to the tenth months. (Septem is Latin for "seven"; octo, "eight"; novem, "nine"; and decem, "ten") Roman mythology usually credits their second king Numa with the establishment of the two new months of Ianuarius and Februarius. These were first placed at the end of the year, but at some point came to be considered the first two months instead.[7]

The January kalend (Latin: Kalendae Ianuariae), the start of the month of January, came to be celebrated as the new year at some point after it became the day for the inaugurating new consuls in 153 BC. Romans had long dated their years by these consulships, rather than sequentially, and making the kalends of January start the new year aligned this dating. Still, private and religious celebrations around the March new year continued for some time and there is no consensus on the question of the timing for 1 January's new status.[8] Once it became the new year, however, it became a time for family gatherings and celebrations. A series of disasters, notably including the failed rebellion of M. Aemilius Lepidus in 78 BC, established a superstition against allowing Rome's market days to fall on the kalends of January and the pontiffs employed intercalation to avoid its occurrence.[9][10]

In Christendom, 1 January traditionally marks the Feast of the Circumcision of Christ

The Julian calendar, proposed by Julius Caesar in AUC 708 (46 BC), was a reform of the Roman calendar. It took effect on 1 January AUC 709 (45 BC), by edict. The calendar became the predominant calendar in the Roman Empire and subsequently, most of the Western world for more than 1,600 years. The Roman calendar began the year on 1 January, and this remained the start of the year after the Julian reform. However, even after local calendars were aligned to the Julian calendar, they started the new year on different dates. The Alexandrian calendar in Egypt started on 29 August (30 August after an Alexandrian leap year). Several local provincial calendars were aligned to start on the birthday of the Emperor Augustus, 23 September. The indiction caused the Byzantine year, which used the Julian calendar, to begin on 1 September; this date is still used in the Eastern Orthodox Church for the beginning of the liturgical year.

At various times and in various places throughout mediaeval Christian Europe, the new year was celebrated on 25 December in honour of the birth of Jesus; 1 March in the old Roman style; 25 March in honour of Lady Day (the Feast of the Annunciation, the date of the conception of Jesus); and on the movable feast of Easter.[2][4]

As a date in the Christian calendar, New Year's Day liturgically marked the Feast of the Naming and Circumcision of Jesus, which is still observed as such in the Anglican Church, the Lutheran Church,[11][12] the Eastern Orthodox Church (Julian calendar, see below) and in Traditional Catholicism by those who retain the usage of the General Roman Calendar of 1960. The mainstream Roman Catholic Church celebrates on this day the Solemnity of Mary, Mother of God.[13]

Among the 7th-century pagans of Flanders and the Netherlands, it was the custom to exchange gifts at the winter solstice. This custom was deplored by Saint Eligius (died 659 or 660), who warned the Flemish and Dutch: "(Do not) make visuals, [little figures of the Old Woman], little deer or iotticos or set tables [for the house-elf, compare Puck] at night or exchange New Year gifts or supply superfluous drinks [another Yule custom]."[14] However, on the date that European Christians celebrated the Feast of the Circumcision, they exchanged Christmas presents because the feast fell within the 12 days of the Christmas season in the Western Christian liturgical calendar;[15] The custom of exchanging Christmas gifts in a Christian context is traced back to the Biblical Magi who gave gifts to the Christ Child.[16][17] In Tudor England, 1 January (as the Feast of the Circumcision, not New Year's Day), along with Christmas Day and Twelfth Night, was celebrated as one of three main festivities among the twelve days of Christmastide.[18]

Most nations of Europe and their colonies officially adopted 1 January as New Year's Day somewhat before they adopted the Gregorian calendar. France changed to 1 January from 1564, most of Germany did so from 1544, the Netherlands from 1556 or 1573 according to sect, Italy (not being united) did so on a variety of dates, Spain and Portugal from 1556, Sweden, Norway and Denmark from 1599, Scotland from 1600, and Russia from 1725.[2] England, Wales, Ireland, and Britain's American colonies did so from 1752.[2][4]

Great Britain and the British Empire

Until 1752 (except Scotland[a]), the Kingdom of Great Britain and its Empire at the time had retained 25 March as the official start of the year (though informal use of 1 January had become common.[b]) With the Calendar (New Style) Act 1750, Britain and the Empire formally adopted 1 January as New Year's Day and, with the same Act, also discarded the Julian calendar (though the actions are otherwise unrelated). The Act came into effect "following the last said day of December 1751".[19][c]

By 1750, an eleven-day difference between the older Julian and the newer and more accurate Gregorian calendars also needed to be adjusted for. There was some religious dissent regarding feast days being moved, especially Christmas Day (see Old Christmas), and isolated communities continued the old reckoning to a greater or lesser extent. The years 1800 and 1900 were leap years in the Julian calendar but not in the Gregorian, so the difference increased to twelve then thirteen days. The year 2000 was a leap year in both calendars.

At various stages during the first half of the twentieth century, all countries in Eastern Christendom adopted the Gregorian calendar as their civil calendar but continued, and have continued into modern times, to use the Julian Calendar for ecclesiastical purposes. As 1 January (Julian) equates to 14 January (Gregorian), a religious celebration of the New Year on this date may seem strange to Western eyes.

New Year's Days in other calendars

In addition, South Koreans celebrate the 1 January New Year's Day of the Gregorian Calendar, and as a national holiday, people have the day off. The Gregorian calendar is now the official civil calendar in South Korea, so the populace now considers the 1 January New Year's Day the first day of the year. South Koreans calculate their age using the East Asian age reckoning method, with all South Koreans adding a year to their age at midnight of the New Year (of the Gregorian, not the Korean calendar).[25] Families enjoy the New Year by counting down to midnight on New Year's Eve on 31 December.

Traditional and modern celebrations and customs 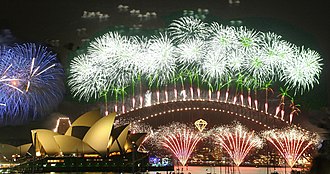 Sydney contributes to some of the major New Year celebrations each year.

The first of January represents the fresh start of a new year after a period of remembrance of the passing year, including on radio, television, and in newspapers, which starts in early December in countries around the world. Publications have year-end articles that review the changes during the previous year. In some cases, publications may set their entire year's work alight in the hope that the smoke emitted from the flame brings new life to the company. There are also articles on planned or expected changes in the coming year.

This day is traditionally a religious feast, but since the 1900s has also become an occasion to celebrate the night of 31 December—New Year's Eve—with parties, public celebrations (often involving fireworks shows) and other traditions focused on the impending arrival of midnight and the new year. Watchnight services are also still observed by many.[28]

New Year's fireworks in front of the Helsinki Cathedral in Helsinki, Finland, about one minute past midnight on New Year's Day in 2016.

The celebrations and activities held worldwide on 1 January as part of New Year's Day commonly include the following:

Music associated with New Year's Day comes in both classical and popular genres, and there is also Christmas song focus on the arrival of a new year during the Christmas and holiday season.

Babies born on New Year's Day are commonly called New Year babies. Hospitals, such as the Dyersburg Regional Medical Center[40] in the US, give out prizes to the first baby born in that hospital in the new year. These prizes are often donated by local businesses. Prizes may include various baby-related items such as baby formula, baby blankets, diapers, and gift certificates to stores which specialise in baby-related merchandise.

On New Year's Day in Antarctica, the stake marking the geographic south pole is moved approximately 10 meters to compensate for the movement of the ice. A new marker stake is designed and made each year by staff at the site nearby.

Other celebrations on 1 January

The Eastern Orthodox Church, the Anglican Church and the Lutheran Church celebrate the Feast of the Circumcision of Christ on 1 January, based on the belief that if Jesus was born on 25 December, then according to Hebrew tradition, his circumcision would have taken place on the eighth day of his life (1 January). The Roman Catholic Church celebrates on this day the Solemnity of Mary, Mother of God, which is also a Holy Day of Obligation.