Beatty was born on July 6, 1937 in Louisville, Kentucky,[1] to Margaret and Charles William Beatty.[2] He had an older sister, Mary Margaret.[3] In 1947, young Ned began singing in gospel and barbershop quartets in St. Matthews, Kentucky, and at his local church. He received a scholarship to sing in the a cappella choir at Transylvania University in Lexington, Kentucky; he attended but did not graduate.[2]

In 1956, he made his stage debut at age 19, appearing in Wilderness Road, an outdoor-historical pageant located in Berea, Kentucky. During his first ten years of theater, he worked at the Barter Theater in Abingdon, Virginia, the State Theatre of Virginia. Returning to Kentucky, he worked in the Louisville area through the mid-1960s, at the Clarksville Little Theater (Indiana) and the newly founded Actors Theater of Louisville. His time at the latter included a run as Willy Loman in Death of a Salesman in 1966. 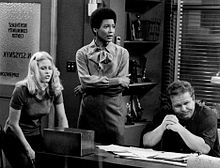 In 1972, Beatty made his film debut as Bobby Trippe in Deliverance, starring Jon Voight and Burt Reynolds, and set in northern Georgia. Beatty's character is forced to strip at gunpoint by two mountain men who humiliate and rape him, a scene so shocking that it is still referred to as a screen milestone.[4][5] In 1972, he also appeared in The Life and Times of Judge Roy Bean, a western with Paul Newman.[6]

In 1973, Beatty had roles in The Thief Who Came to Dinner, The Last American Hero, and White Lightning. The latter film reunited Beatty with his Deliverance co-star Burt Reynolds.[7] He also appeared in an episode of the TV series The Waltons that year, as well as the TV movie The Marcus-Nelson Murders and the pilot for the series Kojak.[8] The next year, he appeared in the television miniseries The Execution of Private Slovik and in the two-part episode of The Rockford Files, "Profit and Loss".[8] In 1975, he appeared in W.W. and the Dixie Dancekings, in Robert Altman's Nashville,[9] and as Colonel Hollister in the M*A*S*H episode, "Dear Peggy".[6] He appeared in the NBC-TV movie Attack on Terror: The FBI vs. the Ku Klux Klan as Deputy Sheriff Ollie Thompson (1975). Beatty also made an appearance on Gunsmoke in "The Hiders" episode in 1975.

Beatty received his only Academy Award nomination, for Best Supporting Actor category for the acclaimed film Network (1976), portraying a television network's bombastic but shrewd chairman of the board who convinces the mad Howard Beale character (portrayed by Peter Finch) that corporation-led global dehumanization is not only inevitable, but is also a good thing. Neither Beatty nor William Holden, who shared the lead role with Finch, won an Oscar. The other three acting awards besides the best supporting actor category were swept by Network performers: Best Actor for Peter Finch, Best Actress for Faye Dunaway, and Best Supporting Actress for Beatrice Straight.

In 1976, he appeared in All the President's Men,[10] The Big Bus, Silver Streak, Gator[7] and Mikey and Nicky.[9] In 1977, he returned to work with John Boorman in Exorcist II: The Heretic (1977), and appeared in "The Final Chapter", the first episode of the television series Quinn Martin's Tales of the Unexpected.[citation needed] During 1977-78, he starred in the short-lived sitcom Szysznyk on CBS.[6]

In 1978, Beatty appeared in Gray Lady Down (1978), a drama aboard a submarine starring Charlton Heston. The film is significant chiefly for being the screen debut of Christopher Reeve, Beatty's future costar. Later that year, Beatty was cast by Richard Donner to portray Lex Luthor's inept henchman Otis in Superman: The Movie (1978), as he would in the 1980 sequel, where we see his character being left behind in prison. He received his first nomination for Emmy Award for Outstanding Lead Actor in a Miniseries or a Special for the television series Friendly Fire (1979). In 1979, he was seen in Wise Blood, directed by John Huston, and 1941, directed by Steven Spielberg.[8]

In 1980, Beatty appeared in Ronald Neame's 1980 American film Hopscotch (1980) with Walter Matthau. In 1981, Beatty appeared in the comedy/science fiction film The Incredible Shrinking Woman, directed by Joel Schumacher and starring Lily Tomlin. In 1982, Beatty returned to work with Richard Donner and Richard Pryor in the comedy The Toy. Beatty worked with Burt Reynolds again in the auto-racing farce Stroker Ace (1983).[7]

In the middle of the 1980s, Beatty appeared in the comedy film Restless Natives (1985), directed by Michael Hoffman. By the end of the 1980s, Beatty appeared in another comedy film, as the academic "Dean Martin" in Back to School (1986), starring Rodney Dangerfield. He played a corrupt cop in the 1987 American neo-noir crime film The Big Easy, directed by Jim McBride and starring Dennis Quaid, and continued with a spy drama, The Fourth Protocol (1987), opposite Michael Caine and Pierce Brosnan.

In 1988, Beatty appeared with the main character Thelonious Pitt in Shadows in the Storm, reunited with Burt Reynolds and Christopher Reeve for the 1988 comedy film Switching Channels, his fifth time in a movie with Reynolds.[7] He appeared in Purple People Eater (1988), portraying a simple grandfather. In 1989, Beatty made Chattahoochee, portraying Dr. Harwood. He had a recurring role as the father of John Goodman's character Dan Conner on the TV comedy series Roseanne (1989–1994). 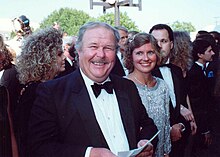 Beatty at the 1990 Annual Emmy Awards

Entering the 1990s, Beatty gained his third nomination for an Emmy Award for Outstanding Supporting Actor in a Miniseries or a Special category for Last Train Home (1990). A year later, he appeared in the British film Hear My Song (1991), in which he portrayed tenor Josef Locke, for which he was nominated for a Golden Globe Award for Best Supporting Actor – Motion Picture.[11]

In 1990, Beatty worked again with Linda Blair in Repossessed (1990), a spoof of The Exorcist. He appeared in the Marvel Comics superhero adventure Captain America (1990). He portrayed the father of the bride in Prelude to a Kiss (1992), opposite Meg Ryan and Alec Baldwin. In 1993, he appeared in the true story based film Rudy, playing a Notre Dame Fighting Irish football fan whose son, against all odds, makes the school's football team. Beatty starred in the television series Homicide: Life on the Street as Detective Stanley Bolander for its first three seasons (1993–1995).[citation needed]

Beatty made the 1994 science-fiction film Replikator (1994) and mystery-comedy Radioland Murders. In 1995, he worked with Sean Connery and Laurence Fishburne in the thriller Just Cause. He appeared as Judge Roy Bean in the TV miniseries adaptation of Larry McMurtry's western novel, Streets of Laredo (1995). He appeared in a 1998 sports-drama film written and directed by Spike Lee and starring Denzel Washington, He Got Game. In 1999, Beatty returned to work with Cookie's Fortune, Life, and Spring Forward.[citation needed]

In the beginning of the 2000s, he was a member of the original cast of the television police drama reunion film Homicide: The Movie (2000), reprising his role of Detective Stanley Bolander. In 2002, he appeared in Peter Hewitt's film Thunderpants. In 2003, he portrayed a simple sheriff in Where the Red Fern Grows.

In the middle of the 2000s, Beatty appeared in the television film The Wool Cap (2004) with William H. Macy, and in 2005, in an American independent film directed and written by Ali Selim, Sweet Land. In March 2006, Beatty received the RiverRun International Film Festival's "Master of Cinema" Award (the highest honor of the festival), in Winston-Salem, North Carolina.

At the end of the 2000s, Beatty portrayed a corrupt U.S. Senator in the film version of Stephen Hunter's novel Point of Impact retitled Shooter (2007), directed by Antoine Fuqua and starring Mark Wahlberg, Michael Peña, and Danny Glover; in a drama film written and directed by Paul Schrader, The Walker (2007), and as the honorable U.S. Congressman Doc Long in the true story Charlie Wilson's War (2007), with Tom Hanks and Julia Roberts, directed by Mike Nichols. He also worked with Tommy Lee Jones in the thriller In the Electric Mist (2009).

In 2010, Beatty starred in the thriller The Killer Inside Me (2010), which was part of the Sundance Film Festival.[14] He also voiced the main antagonist Lots-O'-Huggin' Bear in Toy Story 3 (2010).[9] In 2011, Beatty worked with actor Johnny Depp and director Gore Verbinski in the computer-animated film Rango (2011),[15] again, playing the role of the antagonist, Tortoise John.[11] He appeared briefly in the film Funny Guy and in the film Rampart (2011), opposite Woody Harrelson, which is set in 1999 Los Angeles. Beatty's final television appearance was in sitcom television series Go On (2013), starring Matthew Perry.[16]

Beatty's next film was The Big Ask (2013), a dark comedy about three couples who head to the desert to help their friend heal after the death of his mother. The film featured Gillian Jacobs, Zachary Knighton, David Krumholtz, Melanie Lynskey, Ahna O'Reilly, and Jason Ritter, and was directed by his son Thomas Beatty and Rebecca Fishman. His other next movie was Baggage Claim (2013), an American comedy film directed by David E. Talbert and written by Talbert based on his book of the same name, opposite Paula Patton, Adam Brody, Djimon Hounsou, Taye Diggs, Christina Milian and Derek Luke, which was also Beatty's final film role before his retirement.[9]

Beatty was not related to fellow Hollywood star Warren Beatty, both born in 1937. When asked if they were related, Ned had been known to joke that Warren was his "illegitimate uncle."[17]

He won a Drama Desk Award for Cat on a Hot Tin Roof (2004) in Outstanding Featured Actor in a Play category.[13]