Branch of biology concerned with the study of fungi 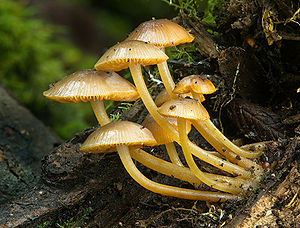 Mushrooms are considered a kind of fungal reproductive organ.

Mycology is the branch of biology concerned with the study of fungi, including their genetic and biochemical properties, their taxonomy and their use to humans as a source for tinder, traditional medicine, food, and entheogens, as well as their dangers, such as toxicity or infection.

A biologist specializing in mycology is called a mycologist.

Mycology branches into the field of phytopathology, the study of plant diseases, and the two disciplines remain closely related because the vast majority of plant pathogens are fungi.

Historically, mycology was a branch of botany because, although fungi are evolutionarily more closely related to animals than to plants,[1] this was not recognized until a few decades ago.[2] Pioneer mycologists included Elias Magnus Fries, Christian Hendrik Persoon, Anton de Bary, Elizabeth Eaton Morse, and Lewis David von Schweinitz.

Many fungi produce toxins,[3] antibiotics,[4] and other secondary metabolites. For example, the cosmopolitan (worldwide) genus Fusarium and their toxins associated with fatal outbreaks of alimentary toxic aleukia in humans were extensively studied by Abraham Joffe.[5]

Fungi are fundamental for life on earth in their roles as symbionts, e.g. in the form of mycorrhizae, insect symbionts, and lichens. Many fungi are able to break down complex organic biomolecules such as lignin, the more durable component of wood, and pollutants such as xenobiotics, petroleum, and polycyclic aromatic hydrocarbons. By decomposing these molecules, fungi play a critical role in the global carbon cycle.

Fungi and other organisms traditionally recognized as fungi, such as oomycetes and myxomycetes (slime molds), often are economically and socially important, as some cause diseases of animals (including humans) and of plants.[6]

Apart from pathogenic fungi, many fungal species are very important in controlling the plant diseases caused by different pathogens. For example, species of the filamentous fungal genus Trichoderma considered as one of the most important biological control agents as an alternative to chemical based products for effective crop diseases management.[7]

Field meetings to find interesting species of fungi are known as 'forays', after the first such meeting organized by the Woolhope Naturalists' Field Club in 1868 and entitled "A foray among the funguses"[sic].[8]

Some fungi can cause disease in humans and other animals - The study of pathogenic fungi that infect animals is referred to as medical mycology.[9]

It is believed that humans started collecting mushrooms as food in prehistoric times. Mushrooms were first written about in the works of Euripides (480-406 BC). The Greek philosopher Theophrastos of Eresos (371-288 BC) was perhaps the first to try to systematically classify plants; mushrooms were considered to be plants missing certain organs. It was later Pliny the Elder (23–79 AD), who wrote about truffles in his encyclopedia Naturalis historia.[10] The word mycology comes from the Ancient Greek: μύκης (mukēs), meaning "fungus" and the suffix -λογία (-logia), meaning "study".[11]

Fungi and truffles are neither herbs, nor roots, nor flowers, nor seeds, but merely the superfluous moisture or earth, of trees, or rotten wood, and of other rotting things. This is plain from the fact that all fungi and truffles, especially those that are used for eating, grow most commonly in thundery and wet weather.

The Middle Ages saw little advancement in the body of knowledge about fungi. However, the invention of the printing press allowed authors to dispel superstitions and misconceptions about the fungi that had been perpetuated by the classical authors.[13]

The start of the modern age of mycology begins with Pier Antonio Micheli's 1737 publication of Nova plantarum genera.[14] Published in Florence, this seminal work laid the foundations for the systematic classification of grasses, mosses and fungi. He originated the still current genus names Polyporus P. Micheli[15] and Tuber P. Micheli,[16] both dated 1729 (though the descriptions were later amended as invalid by modern rules). Note that when referring to the scientific name of a genus, the author abbreviation can optionally be added afterwards.

The founding nomenclaturist Carl Linnaeus included fungi in his "binomial" naming system of 1753, where each type of organism has a two-word name consisting of the "genus" and the "species" (whereas up to then organisms were often designated with Latin phrases containing many words).[17] He originated the scientific names, still used today, of numerous well-known mushroom taxa, such as Boletus L.[18] and Agaricus L..[19] At that period fungi were considered to belong to the plant kingdom, and so they find their place in his magnum opus Species Plantarum, but he was much more interested in higher plants and for instance he grouped together as genus Agaricus all gilled mushrooms which have a stem.[20][21] There are many thousands of such gilled species, which later were divided into dozens of diverse genera and in its modern usage the genus Agaricus only refers to mushrooms closely related to the common shop mushroom, Agaricus bisporus (J.E. Lange) Imbach.[22] As an example, Linnaeus gave the name Agaricus deliciosus to the saffron milk-cap, but its current name is Lactarius deliciosus (L.) Gray.[23] On the other hand the field mushroom Agaricus campestris L. has kept the same name ever since Linnaeus's publication.[24] The English word "agaric" is still used for any gilled mushroom, which corresponds to Linnaeus's sense of the word.[22]

The term mycology and the complementary term mycologist were first used in 1836 by M.J. Berkeley.[25]

Mushrooms produce large amounts of vitamin D when exposed to ultraviolet (UV) light.[28] Penicillin, ciclosporin, griseofulvin, cephalosporin and psilocybin are examples of drugs that have been isolated from molds or other fungi.[29][30]

Presented content of the Wikipedia article was extracted in 2021-06-13 based on https://en.wikipedia.org/?curid=20874