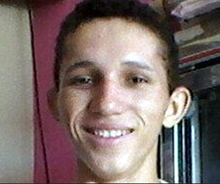 Otávio Jordão da Silva Cantanhede, a Brazilian amateur football referee,[1] was lynched, beheaded and quartered by football spectators after he stabbed a player to death in a match he officiated on 30 June 2013.[2][3]

On 30 June 2013, da Silva was refereeing an amateur football match at Pio XII, in Maranhão, Brazil.[4][5] Da Silva sent off player Josemir Santos Abreu, 31, who refused to leave the field and began a fight with the referee. Abreu threw a punch, which prompted da Silva to draw a knife from his pocket and repeatedly stab Abreu. Abreu died on the way to the hospital.[2][6] When fans watching the game, including Abreu's friends and family, found out about his death,[7] they invaded the pitch[8] and stoned the referee, before decapitating him, quartering him,[9] and putting his head on a stake in the pitch.[2][10][11][12][13] Police chief Valter Costa was quoted as saying "One crime will never justify another".[2]

One suspect was arrested.[3] However, police were searching for two more people,[6] including Abreu's brother.[14]