In the United States, the law for murder varies by jurisdiction. In most US jurisdictions there is a hierarchy of acts, known collectively as homicide, of which first degree murder and felony murder are the most serious, followed by second degree murder, followed by voluntary manslaughter and involuntary manslaughter which are not as serious, and ending finally in justifiable homicide, which is not a crime. However, because there are at least 52 relevant jurisdictions, each with its own criminal code, this is a considerable simplification.[1]

Sentencing also varies widely depending upon the specific murder charge. "Life imprisonment" is a common penalty for first degree murder, but its meaning varies widely.[2]

Capital punishment is a legal sentence in 32 states,[3] and in the federal civilian and military legal systems. The United States is unusual in actually performing executions,[4] with 34 states having performed executions since capital punishment was reinstated in 1976. The methods of execution have varied, but the most common method since 1976 has been lethal injection.[5] In 2014 a total of 35 people were executed,[6] and 3,002 were on death row.[7]

The federal Unborn Victims of Violence Act, enacted in 2004 and codified at 18 U.S. Code § 1841,[8] allows for a fetus to be treated as a victim in crimes. Subsection (c) of that statute specifically prohibits prosecutions related to consented abortions and medical treatments.[8]

If, however, the victim is a federal official, an ambassador, consul or other foreign official under the protection of the United States, or if the crime took place on federal property or involved crossing state borders, or in a manner that substantially affects interstate commerce or national security, then the federal government also has jurisdiction. If a crime is not committed within any state, then federal jurisdiction is exclusive, for example vessels of the U.S. Navy or the U.S. Merchant Marine in international waters and U.S. military bases worldwide.

Jurisdiction over the crime of murder can be complex as a result of the principle of "dual sovereignty" that is part of federalism. In cases where a murder involves both state and federal jurisdiction, the offender can be tried and punished separately for each crime without raising issues of double jeopardy, unless the court believes that the new prosecution is merely a "sham" forwarded by the prior prosecutor.[10] In the United States there is no statute of limitations on the crime of murder.[11]

States have adopted several different systems for classifying murders by degree. The most common separates murder into two degrees (first and second degree murder), and treats voluntary and involuntary manslaughter as separate crimes that do not constitute murder.[12]

First-degree murder
Any intentional murder that is willful and premeditated with malice aforethought. Felony murder, a charge that may be filed against a defendant who is involved in a dangerous crime where a death results from the crime,[12] is typically first-degree.[13]
Second-degree murder
Any intentional murder with malice aforethought, but is not premeditated or planned in advance.[14]
Voluntary manslaughter
Sometimes called a crime of passion murder, is any intentional killing that involves no prior intent to kill, and which was committed under such circumstances that would "cause a reasonable person to become emotionally or mentally disturbed". Both this and second-degree murder are committed on the spot under a spur-of-the-moment choice, but the two differ in the magnitude of the circumstances surrounding the crime. For example, a bar fight that results in death would ordinarily constitute second-degree murder. If that same bar fight stemmed from a discovery of infidelity, however, it may be voluntary manslaughter.[15]
Involuntary manslaughter
A killing that stems from a lack of intention to cause death but involving an intentional or negligent act leading to death. A drunk driving–related death is typically involuntary manslaughter (see also vehicular homicide, causing death by dangerous driving, gross negligence manslaughter and causing death by criminal negligence for international equivalents). Note that the "unintentional" element here refers to the lack of intent to bring about the death. All three crimes above feature an intent to kill, whereas involuntary manslaughter is "unintentional", because the killer did not intend for a death to result from their intentional actions. If there is a presence of intention it relates only to the intent to cause a violent act which brings about the death, but not an intention to bring about the death itself.[16]

The New York statutes also recognize "murder for hire" as first degree murder. Texas uses a similar scheme to New York, but refers to first-degree murder as "capital murder", a term which typically applies only to those crimes that merit the death penalty. Some states, such as Florida, do not separate the two kinds of manslaughter. 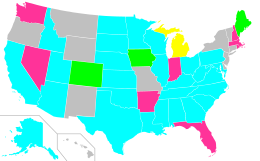 Under the common law, an assault on a pregnant woman resulting in a stillbirth was not considered murder.[79] Remedies were limited to criminal penalties for the assault on the mother and tort action for loss of the anticipated economic services of the lost child, for emotional pain and suffering, or both. With the widespread adoption of laws protecting unborn life, the assailant could be charged with that offense, but the penalty was often only a fine and a few days in jail. A number of states have passed "fetal homicide" laws, making killing of a fetus murder; the laws differ about the stage of development at which the fetus is protected.

After several well-publicized cases, Congress in 2004 passed the Unborn Victims of Violence Act, which specifically criminalizes harming a fetus, with the same penalties as for a similar attack upon a person, when the attack would be a federal offense.[80] Most such attacks fall under state laws; for instance, Scott Peterson was convicted of killing his unborn son as well as his wife under California's pre-existing fetal homicide law.[81]

In Arizona, a person is charged with murder when the offender knowingly and intentionally causes the death of a person or unborn child. The murder must be premeditated. In the state of Arizona, if one is found guilty of first degree murder, there is the possibility of receiving the death penalty.[82]

If a person is convicted of capital murder in California, that person may face a sentence of life in prison without the possibility of parole, or the death penalty.[83]

A person convicted of first-degree murder will face a sentence of 25 years-to-life in prison, and thus must serve at least 25 years before being eligible for parole.[83] If the murder was committed because of the victim's race, religion, or gender, the convicted will be sentenced to life in prison without the possibility of parole.[84]

A person convicted of second-degree murder in California will face a sentence of 15 years-to-life in prison, and thus must serve at least 15 years in prison before being eligible for parole.[85]

Punishments are increased if the murder victim was a peace officer,[86] or was killed during a drive-by shooting.[87]

If a gun was used during the murder, the punishment will include an additional 10, 20, or 25 years to life prison sentence. Those convicted will also receive a strike on their criminal record, and fines of up to $10,000. They will also have to pay restitution to victims, and will no longer be allowed to own a gun.[88]

In Florida, a person is guilty of first degree murder when it is perpetrated from a premeditated design to result in the death of a human being. A person is also guilty of first degree murder if they cause the death of any individual during the commission of a predicate felony regardless of actual intent or premeditation. This is called felony murder. This offense is categorized as capital offense, so if convicted, the offender could possibly receive the death penalty.[89][90]

The state of Hawaii has no death penalty. If they are found guilty, the maximum penalty is life imprisonment without the possibility of parole.[91][92] A first degree murder involves one or more specific elements:

Louisiana states homicide in the third degree is manslaughter. There are other specific guidelines, for example, the killing of a police officer or firefighter is an automatic first degree charge, and intent to kill more than one person is automatically a first degree charge. In the state of Louisiana convicted murderers can receive life imprisonment or the death penalty.[93]

In Michigan, a person is found guilty of first degree murder when murder is perpetrated by means of poison, lying in wait, or any other willful, deliberate, and premeditated killing. In Michigan, the top penalty the perpetrator can receive is life imprisonment.[94]

In Nevada, first degree murder is the unlawful killing of a human being with malice aforethought, either expressed or implied. If a serial killer is found guilty with aggravating circumstances, for example killing someone with torture or killing a stranger with no apparent motive, then the state can seek the death penalty or a sentence of life without parole.[95]

The offender can possibly get a charge of aggravated first degree murder if he commits first degree murder and have an aggravating circumstance, for example if he kills a public safety official, such as a police officer, firefighter, or paramedic. In this case he can receive the death penalty.[98] However, in October 2018, the Washington State Supreme Court ruled that execution could no longer be used as a penalty for any crime.