Burmese army general and de facto leader of Myanmar
In this Burmese name, the given name is Min Aung Hlaing. There is no family name.

Min Aung Hlaing (Burmese: မင်းအောင်လှိုင်; born 3 July 1956) is a Burmese army general who has served as Chairman of the State Administration Council of Myanmar since 2 February 2021, a position which makes him the country's de facto leader.[1][2] He has also been the commander-in-chief of Defence Services since March 2011. He seized power after overthrowing the elected government led by former State Counsellor Aung San Suu Kyi in the 2021 Myanmar coup d'état.[3] He reimposed military rule and martial law, ending a nearly ten-year period of civilian rule from March 2011 to February 2021.[4][5] He served as Joint Chief of Staff of the Ministry of Defence from 2010 to 2011. He is also a member of the National Defence and Security Council (NDSC) chaired by the president of Myanmar.[6] He was promoted to four-star General in 2011 and five-star General in 2013.[7]

Min Aung Hlaing was born on 3 July 1956 in Tavoy, Burma (now Dawei, Myanmar). His father, Thaung Hlaing, is a former civil engineer at the Ministry of Construction.[8]

Min Aung Hlaing passed his matriculation exam in 1972 at BEHS 1 Latha of Rangoon (now Yangon).[8][9] He attended and studied law at the Rangoon Arts and Science University from 1973 to 1974. He was admitted to the Defense Services Academy as part of the 19th Intake in 1974 on his third attempt, where he graduated.[10] According to classmates, Min Aung Hlaing was taciturn, and an unremarkable cadet.[11] He was reportedly shunned by classmates because of his reserved personality.[8]

Following graduation, Min Aung Hlaing went on to serve in different command positions, rising slowly through the ranks.[11] Early in his career, military colleagues gave him a nickname referring to cat feces, "something deposited quietly but leaving a powerful stink."[12] As he rose through the ranks, Min Aung Hlaing earned a reputation as a hardliner.[8] His military work earned him the favour of Senior General Than Shwe.[13] Min Aung Hlaing is characterized as having a "big man" management style not conducive to collaboration or listening.[13]

In 2002, he was promoted to commander of the Triangle Region Command in Eastern Shan State and was a central figure in negotiations with two rebel groups, the United Wa State Army (UWSA) and the National Democratic Alliance Army (NDAA).[8] Min Aung Hlaing was reportedly close with former Thai Prime Minister and General Prem Tinsulanonda, considering Prem a father figure.[14][15]

Min Aung Hlaing supported the military crackdown of the Saffron Revolution in 2008.[8] He rose to prominence in 2009 after leading an offensive against the insurgent Myanmar Nationalities Democratic Alliance Army in Kokang.[16] In June 2010, Min Aung Hlaing replaced General Shwe Mann as Joint Chief of Staff of the Army, Navy, and Air Force.[8]

Commander-in-Chief of the Armed Forces

In the lead-up to 2011, the military began embarking on a series of political reforms to transition Myanmar to a quasi-democracy. The ruling junta, the State Peace and Development Council, engineered its formal departure from power, after holding the 2010 Myanmar general election, which was won by the Union Solidarity and Development Party (USDP), the military's proxy party. On 30 March 2011, outgoing head of state, Senior General Than Shwe, then the incumbent Commander-in-Chief of Myanmar's Armed Forces, appointed Min Aung Hlaing as his successor, ahead of more senior officers.[17][18] Min Aung Hlaing's appointment coincided with USDP's rise to power, during which he oversaw a series of military reforms, and supported efforts by the USDP-led government to strike peace deals with ethnic armed groups.[17]

In November 2011, according to The Irrawaddy News, it was "widely believed" that following Min Aung Hlaing's meetings with Chinese military officials that month and his leadership in creating a bilateral agreement on defense cooperation with the Chinese, he had also held talks with Chinese Vice-President Xi Jinping regarding cooperation from China with respect to the Kachin Conflict.[16]

In 2014, as Min Aung Hlaing approached the age of 60, which is the mandatory age of retirement for military officers, the Armed Forces' Department of Defence Council issued a directive, enabling Min Aung Hlaing to extend his mandatory retirement age to 65, in 2021.[20]

In August 2015, the USDP fractured, and President Thein Sein purged the faction led by Shwe Mann, a former general and Speaker of the Pyithu Hluttaw.[17] Min Aung Hlaing oversaw a direct military intervention to oust Shwe Mann from power, indicating the military's desire to continue furthering its agenda through USDP.[21] Shwe Mann had advocated for legislation and constitutional amendments that would have decreased the military's influence, against the interests of the military and USDP.[21] 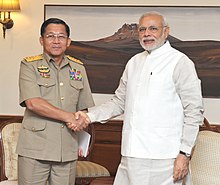 The 2015 Myanmar general election saw the National League for Democracy (NLD), led by Aung San Suu Kyi, win in a landslide. With the transition from an USDP to NLD-led government, Min Aung Hlaing shifted his priorities to recovering state power for the military establishment.[17] His intransigence and refusal to cooperate with the civilian-led government undermined progress toward Myanmar's peace process.[17] As the NLD assumed power, Min Aung Hlaing began intensifying an ongoing military crackdown on the Rohingya, beginning in October 2016.[22][23] At the Union Peace Conference - 21st Century Panglong in August 2020, he sharply warned the NLD against scapegoating the military for its role in the ongoing ethnic conflicts.[24]

Min Aung Hlaing also began to signal his interest in civilian politics.[17] He began assuming a more statesman-like persona, and became increasingly assertive about the military's role.[24][12] In the lead-up to the 2020 Myanmar general election, he worked with the USDP to position himself as the next President.[24] Throughout 2019, Min Aung Hlaing made several public appearances dubbed a "charm offensive," at several religious sites and charity functions,[25] raising speculation about his political ambitions.[26][20] To cultivate his public persona, he began two Facebook pages that commanded a combined following of 4.1 million followers.[27][28] In January 2020, Min Aung Hlaing met with Chinese leader Xi Jinping in Nay Pyi Taw. Xi promoted the practical cooperation under the framework of the One Belt One Road to achieve results at an early date and benefit Myanmar's people.[29] In May 2020, Min Aung Hlaing reshuffled senior military ranks, promoting a new generation of officers loyal to Min Aung Hlaing, including Kyaw Swar Lin, who became the military's youngest lieutenant-general.[30]

In November 2020, Min Aung Hlaing made a series of public comments questioning the legitimacy of the upcoming 2020 election, in potential violation of the Civil Services Personnel Law.[31] On 5 November, the Tatmadaw declared that Min Aung Hlaing's rank is equivalent to Vice President of Myanmar.[32] After casting his ballot in the 2020 election, Min Aung Hlaing vowed to accept the election results.[33] The 2020 election saw NLD win in a larger landslide than in 2015, forestalling Min Aung Hlaing's political ambitions. In response, the military began intensifying allegations of electoral fraud and irregularities, submitting formal complaints to the Union Election Commission. On 27 January 2021, Min Aung Hlaing publicly remarked that he would not rule out a coup d'état and abolition of the Constitution, if allegations of voter fraud during last year’s election were not adequately addressed.[34] These comments sparked concern about another potential coup in the country.[35] The following day, the Union Election Commission issued a statement rejecting claims of electoral fraud, citing the lack of evidence submitted to substantiate these claims.[36] On 29 January, the military issued clarifying statements pledging to protect and abide by the Constitution and applicable laws.[37]

On 1 February, Min Aung Hlaing led the 2021 Myanmar coup d'état, one day before democratically-elected members of parliament were scheduled to be sworn in as members of the Assembly of the Union. The following day, he established the State Administration Council as the country's interim ruling body.[38][39]

On 22 May 2021, Min Aung Hlaing gave his first interview since the coup to Hong Kong-based Chinese language Phoenix Television. During the interview, he referred to deposed leader Aung San Suu Kyi and he said that she "is in good health. She is at her home and healthy. She is going to face trial at the court in a few days."[40] On the same day, Myanmar Now reported that shortly after the coup, Min Aung Hlaing appointed himself indefinitely as the commander-in-chief and therefore the de facto leader of Myanmar.[41]

The UNHRC reported that Min Aung Hlaing's soldiers have been deliberately targeting civilians in Northern states of Myanmar and have been committing systemic discrimination and human rights violations against minority communities in Rakhine State.[42] In particular, he has been accused of ethnic cleansing against the Rohingya people.[43] These human rights violations could amount to genocide, crimes against humanity, and war crimes.[44]

In 2018, the United Nations Independent International Fact-Finding Mission on Myanmar, led by Marzuki Darusman, determined that Min Aung Hlaing and other Myanmar military generals oversaw atrocities against the Rohingya in Rakhine, Kachin and Shan states, and did so with genocidal intent.[45] The UN investigative panel said that Min Aung Hlaing, along with four other commanders (Soe Win, Aung Kyaw Zaw, Maung Maung Soe, and Than Oo) should be tried for war crimes and crimes against humanity (including genocide) in the International Criminal Court or an ad hoc international tribunal.[45]

Facebook banned Min Aung Hlaing from its platform along with 19 other top Burmese officials and organisations to prevent further heated ethnic and religious tensions in Myanmar. This action followed a UN investigation's report that certain military leaders in Myanmar be investigated and prosecuted for genocide over a crackdown on Rohingya Muslims.[46][47] Twitter later banned him on 16 May 2019.[48]

On 17 March 2019, Kyaw Zaw Oo, an Arakanese MP, published a bilingual open letter to Min Aung Hlaing about many violations of Tatmadaw in Rakhine State, inflicting on lives and property of the civilians, damaging some buildings of cultural heritage as well.[49][50]

Min Aung Hlaing has courted enduring controversy for his family's extensive business assets and potential conflicts of interest. He is a major shareholder in the army-owned Myanmar Economic Holdings Limited (MEHL). During the 2010–11 fiscal year, he had owned 5,000 shares and received an annual dividend of $250,000.[53] He sits on MEHL's Patron Group, which runs the conglomerate.[54]

The U.S. Department of the Treasury has imposed sanctions on "Min Aung Hlaing" since 10 December 2019, pursuant to Executive Order 13818, which builds upon and implements the Global Magnitsky Human Rights Accountability Act and targets perpetrators of serious human rights abuse and corruption. He has committed serious human rights abuse against members of ethnic minority groups across Burma. This US sanctions include a freezing of assets under the US and a ban on transactions with any US person.[60]

About one year later on February 11th, 2021, he was also placed on the sanctions list of the OFAC pursuant to Executive Order 14014, in response to the Burmese military’s coup against the democratically elected civilian government of Burma.[61]

The Government of Canada has imposed sanctions on him since 18 February 2021, pursuant to Special Economic Measures Act and Special Economic Measures (Burma) Regulations, in response to the gravity of the human rights and humanitarian situation in Myanmar (formerly Burma). Canadian sanctions include a freezing of assets under Canada and a ban on transactions with any Canadian person.[62][63]

HM Treasury and the Foreign, Commonwealth and Development Office of the United Kingdom have imposed sanctions on him since 25 February 2021, for his responsibility for serious human rights violations in Burma. The UK sanctions include a freezing of assets under the UK and a ban on entry or transit to the UK.[64]