Miles Taylor is an American former government official in the George W. Bush and Trump administrations, best known for his previously anonymous criticisms of Donald Trump. He was a Trump administration appointee who served in the United States Department of Homeland Security from 2017 to 2019, including as Chief of Staff to former Homeland Security Secretary Kirstjen Nielsen and Acting Secretary Kevin McAleenan.

In 2018, while deputy chief of staff to Nielsen, he wrote The New York Times op-ed "I Am Part of the Resistance Inside the Trump Administration" under the pen-name "Anonymous", which drew widespread attention for its criticism of Trump. In 2019, he published the book A Warning.[3] He did not reveal himself to be "Anonymous" until October 2020.[4][5]

In August 2020, while on leave from his job at Google, he produced an ad for Republican Voters Against Trump, denouncing Trump and endorsing Joe Biden in the 2020 presidential election. Taylor was the first former senior Trump administration staff member to endorse Biden.[6]

Taylor grew up in La Porte, Indiana and graduated from La Porte High School in 2006. He received a Bachelor of Arts in international security studies from Indiana University Bloomington, which he attended as a Harry S. Truman Scholar and Herman B. Wells Scholar.[7] As a senior, he received IU's inaugural Presidential Student Internship.[8]

Taylor received an MPhil in International Relations from New College, Oxford, which he attended as a 2012 Marshall Scholar.[7][9]

Taylor's decision to have a career in government was largely motivated by the September 11 attacks in 2001, stating that "I wanted to focus my entire professional life on making sure a day like that wouldn't happen again, and dedicating my career to, what I thought, was the mission of this country, and that's the advancement of human freedom."[10]

In 2007, while in college, Taylor interned in the office of the Secretary of Defense and the office of Vice President Dick Cheney.[8] In 2008, he worked as Briefing Book coordinator at the Department of Homeland Security.[8] In 2009 he served as a regional policy intern for the Defense Department.[8]

Taylor was a political appointee in the administration of George W. Bush.[7] He was a staffer for the House Appropriations Committee and then the Committee on Homeland Security, where he was advisor to its chair, Michael McCaul.[7] He was McCaul's chief speechwriter and the Majority Staff Lead for the congressional Task Force on Combating Terrorist and Foreign Fighter Travel.[7] In 2015 he was named a Penn Kemble Fellow by the National Endowment for Democracy.[11] 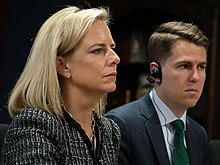 Taylor (right) with then-Secretary Nielsen in 2018

In October 2020, Taylor revealed himself to be "Anonymous", the author of a September 5, 2018 The New York Times op-ed, "I Am Part of the Resistance Inside the Trump Administration", and the follow-up book, A Warning, published in November 2019.[3][14]

In August 2020, Taylor said that in April 2019 he had personally witnessed President Trump offer Homeland Security staff federal pardons for any criminal prosecution arising from their actions in stopping illegal immigration to the United States, and at that point Taylor decided to resign from the Department.[15][16] White House spokesman Judd Deere rejected Taylor's allegations, and described him as "another creature of the D.C. Swamp who never understood the importance of the President's agenda or why the American people elected him and clearly just wants to cash-in".[17]

In September 2019 Taylor was hired by Google as a government affairs and public policy manager with a title of Head of National Security Policy Engagement.[18][1] He is a senior fellow at Auburn University's McCrary Center for Cyber and Critical Infrastructure Security and a member of the Council on Foreign Relations.[19]

Public opposition to the Trump administration

In August 2020, Taylor took a leave from Google to support Joe Biden's presidential campaign.[20] He made an ad for Republican Voters Against Trump, denouncing Trump and endorsing Biden in the 2020 presidential election.[20][21] In August, Taylor also wrote an opinion piece for the Washington Post ;[12] Columnist Jennifer Rubin said it "adds detail to what we could have only surmised was the story behind chaotic policy rollouts."[22] The next day, Taylor appeared on multiple news and analysis shows saying that other former members of the Trump administration were considering speaking out similarly.[23]

On August 24, Taylor confirmed to NBC News that he has co-founded with two other unnamed Republican officials the Republican Political Alliance for Integrity and Reform (REPAIR), an anti-Trump group which aims to reform and repair the Republican Party after the 2020 United States election.[24]

Journalist Judy Woodruff asked Taylor in a PBS NewsHour interview why he had spoken out when he did rather than immediately after leaving the administration. Taylor responded,

If I had come out and talked about Donald Trump a year ago, when I left the administration, he's a master of distraction. He would have buried it within a day, and it wouldn't have mattered to voters. But, right now, American voters are reviewing the president's resume...so, I think there's no more important time for me or other ex-Trump officials to come out and actually talk about what the experience was inside the administration and what kind of man sits behind the Resolute Desk in the Oval Office.[25]

In September 2020, Taylor revealed to The Lincoln Project that before he resigned from the DHS, a senior presidential adviser told him about a list of executive orders that has been prepared in case President Trump wins a second term, which Taylor alleges are orders deemed unacceptable during a first term presidency as they could harm the president's chances of reelection.[10] Later, BuzzFeed reporter Hamed Aleaziz concluded that Taylor was implying Stephen Miller was that senior presidential adviser, with The Guardian reiterating this claim and reporting that Miller's biographer Jean Guerrero warns about a "wishlist" of his relating to immigration policy under a Trump second term.[26]

Taylor denied being "Anonymous" in a number of interviews. After he acknowledged that he was "Anonymous", Taylor said he owed a mea culpa to those journalists but noted that, as "Anonymous", he always said he "would ultimately come out under my own name".[27]

Taylor is a lifelong member of the Republican Party.[25][28][29] He donated to the Barack Obama campaign in the 2008 presidential election; according to Taylor, he was "gunning for John McCain... [but] wanted to be able to tell [his] kids that ... [he] supported the first Black president of the United States."[30]