Keaton was awarded a Career Achievement Award from the Hollywood Film Festival.[1] On January 18, 2016, he was named Officer of Order of Arts and Letters in France.[2] He is also a visiting scholar at Carnegie Mellon University.[3]

Michael John Douglas, the youngest of seven children, was born at Ohio Valley Hospital in Kennedy Township, Pennsylvania,[4] on September 5, 1951.[5] He was raised between McKees Rocks,[6] Coraopolis and Robinson Township, Pennsylvania.[7][8] His father, George A. Douglas, worked as a civil engineer and surveyor, and his mother, Leona Elizabeth (née Loftus), a homemaker, came from McKees Rocks.[5][9] Keaton was raised in a Catholic family.[10] His mother was of Irish descent,[10][11][12] while his father was of Scottish, Scotch-Irish, German and English ancestry, and was originally from a Protestant family.[13][14][15] Keaton attended Montour High School in Robinson Township, Pennsylvania,[16] and studied speech for two years at Kent State University, where he appeared in plays, and returned to Pennsylvania to pursue his career.[17]

Keaton first appeared on TV in the Pittsburgh public television programs Where the Heart Is and Mister Rogers' Neighborhood (1975). For Mister Rogers he played one of the "Flying Zookeeni Brothers"[18] and served as a full-time production assistant.[19] (In 2004, after Fred Rogers' death, Keaton hosted a PBS memorial tribute, Fred Rogers: America's Favorite Neighbor.) Keaton also worked as an actor in Pittsburgh theatre; he played the role of Rick in the Pittsburgh premiere of David Rabe's Sticks and Bones with the Pittsburgh Poor Players.[20] He also performed stand-up comedy during his early years to supplement his income.[21]

Keaton left Pittsburgh and moved to Los Angeles to begin auditioning for various TV parts. He popped up in various popular TV shows including Maude and The Mary Tyler Moore Hour. He decided to use a stage name to satisfy SAG rules, as there was already an actor (Michael Douglas) and daytime host (Mike Douglas) with the same or similar names. In response to questions as to whether he selected his new surname due to an attraction to actress Diane Keaton, or in homage to silent film actor Buster Keaton, he has responded by saying "it had nothing to do with that."[22][23] Keaton has said in several interviews that he searched a phone book under "K," saw "Keaton" and decided to stop looking.[24] Keaton's film debut came in a small non-speaking role in the Joan Rivers film Rabbit Test.[25]

His next big break was working alongside Jim Belushi in the short-lived comedy series Working Stiffs, which showcased his comedic talent and led to a co-starring role in the comedy Night Shift directed by Ron Howard. This was his breakout role as the fast-talking schemer Bill "Blaze" Blazejowski and earned Keaton some critical acclaim.[26]

Night Shift led to Keaton becoming a leading man in the landmark comedy hit Mr. Mom, which was met with universal acclaim. Keaton was pigeonholed as a comic lead during this time with films like Johnny Dangerously, Gung Ho, The Squeeze, The Dream Team, though Keaton tried to transition to dramatic leads as early as 1984, playing a hockey player in Touch and Go, which was shelved until 1986. Woody Allen cast Keaton as the lead in The Purple Rose of Cairo the following year, but after filming began Allen felt Keaton was "too modern" and reshot his scenes with Jeff Daniels in the final film, further delaying his transition to drama in the public eye.[27] When Touch and Go was finally released in 1986 the studio was still unsure of how to market the film, making the poster, trailer and tv spots similar to Mr. Mom, which resulted the film not finding its target audience.

1988 was the seminal year in Keaton's career where he landed two major unconventional roles, forever changing his image to audiences. He played the title character in Tim Burton's horror-comedy Beetlejuice, earning Keaton widespread acclaim and boosting him to Hollywood's A list. That same year, he also gave an acclaimed dramatic performance as a drug-addicted realtor in Glenn Gordon Caron's Clean and Sober.[28]

Keaton's career was given another major boost when he was again cast by Tim Burton, this time as the title comic book superhero of 1989's Batman.[29][30] Warner Bros. received thousands of letters of complaint by fans who believed Keaton was the wrong choice to portray Batman.[31] However, Keaton's performance in the role ultimately earned widespread acclaim from both critics and audiences,[32] and Batman became one of the most successful films of 1989.[33]

According to Les Daniels's reference book Batman: The Complete History, Keaton was not surprised when he was first considered as Batman as he initially believed the film would be similar to the 1960s television series starring Adam West. It was only after he was introduced to Frank Miller's comic book miniseries, The Dark Knight Returns, that Keaton really understood the dark and brooding side of Batman that he portrayed to much fan approval.[34] Keaton later reprised the role for the sequel Batman Returns (1992), which was another critically acclaimed success.[35] He was initially set to reprise the role again for a third Batman film, even going as far as to show up for costume fitting. However, when Burton was dropped as director of the film, Keaton left the franchise as well. He was reportedly dissatisfied with the screenplay approved by the new director, Joel Schumacher. According to the A&E Biography episode on Keaton, after he had refused the first time (after meetings with Schumacher), Warner Bros. offered him $15 million, but Keaton steadfastly refused and was replaced by Val Kilmer in Batman Forever (1995).[36]

Keaton remained active during the 1990s, appearing in a wide range of films, including Pacific Heights, One Good Cop, My Life and the star-studded Shakespearean story Much Ado About Nothing. He starred in The Paper and Multiplicity, and twice in the same role, that of Elmore Leonard character Agent Ray Nicolette, in the films Jackie Brown and Out of Sight. He made the family holiday movie Jack Frost and the thriller Desperate Measures. Keaton starred as a political candidate's speechwriter in 1994's Speechless.[37] 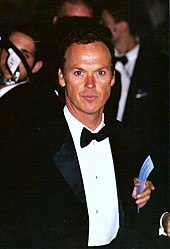 In the early 2000s, Keaton appeared in several films with mixed success, including Live From Baghdad (for which he was nominated for a Golden Globe award), First Daughter (playing the President of the United States), White Noise and Herbie: Fully Loaded. While he continued to receive good notices from the critics (particularly for Jackie Brown), he was not able to re-approach the box-office success of Batman until the release of Disney/Pixar's Cars (2006), in which he voiced Chick Hicks, a green race car with a mustache, who frequently loses his patience with losing to his longtime rival, Strip Weathers, a.k.a The King, voiced by Richard Petty. On New Year's Day of 2004, he hosted the PBS TV special Mr. Rogers: America's Favorite Neighbor. It was released by Triumph Marketing LLC on DVD September 28, 2004. In 2006, he starred in Game 6, about the 1986 World Series bid by the Boston Red Sox. He had a cameo in the Tenacious D short film Time Fixers, an iTunes exclusive. The 9-minute film was released to coincide with Tenacious D in The Pick of Destiny.[38] Keaton reportedly was cast as Jack Shephard in the series Lost, with the understanding that the role of Jack would be a brief one. Once the role was retooled to be a long-running series regular, Keaton withdrew. The part was then given to actor Matthew Fox. The show ran for six seasons, with the Shephard role continuing throughout.[39]

Keaton starred in the 2007 TV miniseries The Company, set during the Cold War, in which he portrayed the real-life CIA counterintelligence chief James Jesus Angleton. The role garnered Keaton a 2008 Screen Actors Guild nomination for Outstanding Performance by a Male Actor in a Television Movie or Miniseries.[40] Keaton provided the voice of Ken in Toy Story 3 (2010). The film received overwhelmingly positive acclaim and grossed over $1 billion worldwide, making it one of the most financially successful films ever.[41] He announced in June 2010 his interest in returning for a Beetlejuice sequel.[42] He played Captain Gene Mauch in the comedy The Other Guys. In 2014 he played the OmniCorp CEO Raymond Sellars in the RoboCop remake as a more active antagonist, taking RoboCop's wife and child hostage, forcing Joel Kinnaman's character to struggle to overcome the 4th directive.[43] 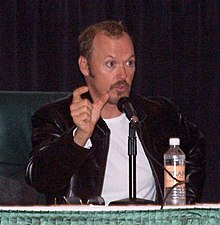 Keaton starred alongside Zach Galifianakis, Edward Norton, Emma Stone, and Naomi Watts in Alejandro González Iñárritu's Birdman or (The Unexpected Virtue of Ignorance) (2014), playing Riggan Thomson, a screen actor, famous for playing the iconic titular superhero, who puts on a Broadway play based on a Raymond Carver short story to regain his former glory.[44] He won the Golden Globe Award for Best Actor in a Musical or Comedy for his portrayal of Thomson and received an Academy Award nomination for Best Actor.[45] In 2015, Keaton appeared as Walter V. Robinson in Tom McCarthy's Academy Award-winning film Spotlight, and in 2016, he starred as businessman Ray Kroc in the biopic The Founder. On July 28, 2016, Keaton was honored with the 2,585th star on the Hollywood Walk of Fame for his contributions to film. The star is located at 6931 Hollywood, Blvd.[46]

In 2017, Keaton played the supervillain The Vulture in Spider-Man: Homecoming; while making this film, Keaton was unable to reprise his role as Chick Hicks for Disney/Pixar's Cars 3 and was replaced by Bob Peterson. Keaton later portrayed Stan Hurley in American Assassin.[47][48] In 2019, he played the villain in Disney's live-action adaptation of Dumbo directed by Tim Burton, co-starring with Colin Farrell and Eva Green.[49] In 2020, Keaton played U.S. Attorney General Ramsey Clark in The Trial of the Chicago 7, a legal drama directed by Aaron Sorkin about seven anti-Vietnam protesters charged with inciting riots in 1968.[50] In 2021, Keaton starred as American lawyer Kenneth Feinberg in the Netflix biographical drama film Worth.[51]

It has been reported that Keaton will star in Goodrich, a film about a man whose second wife suddenly leaves him, forcing him to take sole care of their nine-year-old twins. Directed by Hallie Meyers-Shyer, filming was set to commence on October 1, 2019.[52][53] He will also appear in the film Morbius, scheduled to be released on January 28, 2022.[54][55] In June 2020, Keaton entered talks to reprise his role as Batman/Bruce Wayne in the DC Extended Universe's upcoming superhero film, The Flash, which is scheduled to be released on November 4, 2022, after last playing the role in 1992.[56] In August 2020, it was reported that Keaton would be reprising his role as Bruce Wayne/Batman,[57][58] though Keaton disputed these claims on October 21 and again on March 22, 2021, stating that it was not confirmed.[59][60] However, on April 19, 2021, Keaton's talent agency, ICM Partners, officially confirmed his involvement with the film when production had officially begun.[61][62]

Keaton was married to Caroline McWilliams from 1982 to 1990. They have a son, Sean, born in 1983. He had a relationship with actress Courteney Cox from 1989 to 1995. Keaton, a longtime Pittsburgh resident and fan of its sports teams, negotiated a break in his Batman movie contract in case the Pittsburgh Pirates made the playoffs that year, although they ultimately did not. He also wrote an ESPN blog on the Pirates during the final months of their 2013 season.[63]

In the 1980s, Keaton bought a ranch near Big Timber, Montana, where he spends much of his time.[64] An avid fisherman, he is often seen on the saltwater fishing series Buccaneers & Bones on Outdoor Channel, along with Tom Brokaw, Zach Gilford, Thomas McGuane and Yvon Chouinard, among others.[65]

In 2019, he appeared in a PETA ad campaign, asking tourists not to visit operations that exploit animals, such as roadside zoos which sometimes offer the opportunity to get selfies with wild animals.[68]