Williams was born in Brooklyn, New York City, the son of a Bahamian mother from Nassau and Booker T. Williams, an American, from Greeleyville, South Carolina, where his African-American family has deep roots.[4] Williams was raised in the Vanderveer Projects in East Flatbush, Brooklyn,[5][6] and attended George Westinghouse Career and Technical Education High School.[7] According to a DNA analysis, he was descended partly from the Mende people of Sierra Leone.[8] Williams was molested as a child, and this left him confused about his sexuality.[9]

After getting into trouble as a youth, he enrolled at the National Black Theatre in New York City.[10]

Williams worked for Pfizer pharmaceuticals as a temp.[11] However, inspired by Janet Jackson's Rhythm Nation 1814, he left school and quit his job, against the wishes of his family, to pursue a career as a dancer. During a year in which he was intermittently homeless, Williams visited record labels and dance studios looking for work. He got a job as a background dancer with singer Kym Sims, which led to more work appearing as a dancer in music videos and on tours with artists such as George Michael and Madonna, as well as some modeling work. He also choreographed Crystal Waters' 1994 single "100% Pure Love".[12][13]

Williams had a large facial scar he received in a bar fight on Jamaica Avenue, New York City, on his 25th birthday, when he was slashed with a razor blade. The scar became his signature feature, and resulted in offers to perform as a thug in music videos,[14] and modeling opportunities with noted photographers like David LaChapelle.[15] One of his first acting roles was alongside Tupac Shakur as High Top, the brother and henchman to Shakur's drug kingpin Tank, in the 1996 film Bullet.[16] Shakur reportedly decided on Williams for the role after spotting a polaroid photograph of him in a production studio.[17]

Williams also served as the American Civil Liberties Union celebrity ambassador to the Campaign for Smart Justice.[18] Williams' portrayals of openly gay characters was deemed to be revolutionary.[19] 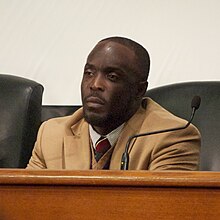 Williams at Harvard University for a panel discussion on The Wire, November 8, 2010

Williams gained recognition as an actor for his portrayal of Omar Little in The Wire, which began filming in 2002. The character was based on Donnie Andrews along with other crime figures in Baltimore.[20] Williams received the part after a single audition,[21] at the encouragement of writer Ed Burns.[22] He was told that the character was slated to appear in just seven episodes and expected him to be killed by the end of the first season.[21] However, creator David Simon stated that they always planned to keep the character as part of the continuing ensemble should the show be renewed beyond one season.[citation needed]

For his portrayal of Omar, Williams was named by USA Today as one of ten reasons they still love television. Omar was praised for his uniqueness in the stale landscape of TV crime dramas and for the wit and humor that Williams brings to the portrayal.[1] Omar has been named as one of the first season's richest characters, a Robin Hood of Baltimore's west side projects. The Baltimore City Paper named the character one of their top ten reasons not to cancel the show and called him "arguably the show's single greatest achievement".[3] In 2007, he was nominated for an NAACP Image Award for Outstanding Actor in a Drama Series for his role as Omar.[23]

Williams pursued the role because he was intrigued by Omar's contradictory nature.[21] He felt Omar's popularity stemmed from his honesty, lack of materialism, individuality and his adherence to his strict code.[21] He felt that the role has been a breakthrough in terms of bringing attention to him and getting further roles.[24] Williams received both positive and negative reactions to Omar's homosexuality and felt that he was successful in challenging attitudes and provoking discussion with the role.[24]

In 2008, then-U.S. Senator Barack Obama cited The Wire as his favorite television show, and called Omar his favorite character. About Omar, Obama said, "That's not an endorsement. He's not my favorite person, but he's a fascinating character... he's the toughest, baddest guy on the show."[25]

During his portrayal of Omar Little, Williams went by his character's name and developed a habit of smoking cannabis and an addiction to cocaine in 2004.[26] Williams lived part-time in Newark, New Jersey using drugs, but sought help from a ministry in neighboring Irvington, which he credited for helping him during the production.[27][28][29]

Williams makes a brief appearance as the shooter at the beginning of the music video for Young Jeezy's "Bury Me a G". He appears in The Kill Point as recurring guest star Q, a police sniper, alongside The Wire co-stars J. D. Williams, Michael Hyatt and Leo Fitzpatrick. He auditioned for the starring role of Mr. Cat but was forced to take a smaller role due to scheduling conflicts; the part of Mr. Cat went to J. D. Williams instead.[32] Williams played a Boston area detective named Devin Amronklin in the 2007 film Gone, Baby, Gone. The film is based on a novel by Dennis Lehane, who has written for The Wire, and was adapted and directed by Ben Affleck. Amronklin is a recurring character in Lehane's Kenzie-Genarro series of books. Williams says that he enjoyed working with Affleck and characterized him as a passionate and hands-on director.[24]

He played Teddy, the former boyfriend of Nikki Tru (Kerry Washington) in the Chris Rock film I Think I Love My Wife. He played James, a policeman, in singer R. Kelly's "Trapped in the Closet". He also appeared in The Game's "Dreams" and "How We Do" music videos, Tony Yayo's "It's a Stick Up" music video and Cam'ron's film Killa Season, as well as Trick Daddy's video "Tuck Your Ice In", Sheek Louch's "Good Love", and Young Jeezy's "Bury me a G" alongside his The Wire co-star Hassan Johnson. In 2013, Williams appeared in ASAP Rocky's video for "Phoenix".[33] Williams played the role of The Thief in the 2009 film The Road, an adaptation of the Cormac McCarthy novel of the same name.[34] In 2010, Williams appeared in the film Life During Wartime. The character he played, Allen, was portrayed by Philip Seymour Hoffman in the film's predecessor, Happiness.[35]

Williams also starred in the film A Day in the Life, which was directed by, produced by, and starred rapper Sticky Fingaz. The entire film is a musical with every line being delivered in rap verse. Williams starred in HBO's Boardwalk Empire for its five seasons (2010–2014). He appeared as Albert "Chalky" White, the leader of 1920s' Atlantic City's black community.[36]

On July 23, 2011, Community creator Dan Harmon revealed that Williams would star in "at least three episodes" of the sitcom's third season.[37] He played the role of Biology Professor Marshall Kane at Greendale Community College.[38]

In November 2011, it was announced that Williams would appear in Quentin Tarantino's feature film Django Unchained.[39] Williams, who had previously confirmed that he was actually in talks with Tarantino to take on the titular role of Django, was to portray a minor character in the film, but scheduling conflicts with Boardwalk Empire prevented him from doing so.[40]

On May 16, 2012, Williams announced that he was an executive producer of the independent film Snow on tha Bluff, Williams' first film under his company, Freedome Productions. On Power 105.1fm's The Breakfast Club, Williams revealed the June 19 release date for Snow on tha Bluff, describing the movie as "real graphic": "everything that is wrong with the 'hood is in this movie".[41] Williams also shared on The Breakfast Club that he was starring in an African American western, They Die by Dawn, with his co-star Snoop from the HBO series The Wire. Williams also revealed that he was starring in the lead role as rapper Ol' Dirty Bastard (ODB) from the Wu-Tang Clan in the movie Dirty Whiteboy in 2014, which is based on the relationship ODB had with his manager during the last two years of his life. Williams mentioned the role was special to him because he grew up listening to Ol' Dirty Bastard and to Wu-Tang and he is also a Brooklyn native.[41]

On March 9, 2015, it was announced that Williams would star in SundanceTV's Hap and Leonard.[44] Also in 2015, Williams appeared in the music video for "The Mephistopheles of Los Angeles" by Marilyn Manson.[45]

In 2016, Williams began working with Vice News, hosting a VICELAND program titled Black Market. In this series, he visits various clandestine markets to explore how they operate while investigating the circumstances that generate their clientele.[46] In 2018, Williams again worked with the Vice team. In "Raised in the System," the extended premiere episode of the sixth season of HBO's Emmy-winning weekly news magazine series Vice, Williams embarked on a personal journey to expose the root of the American mass incarceration crisis: the juvenile justice system.[47]

Williams was originally cast as Dryden Vos, a crime lord, in Solo: A Star Wars Story.[48] However, he exited the role after being unable to return for re-shoots due to scheduling conflicts with The Red Sea Diving Resort.[49] Paul Bettany was cast in his place, with the character being reworked from a motion-capture alien to a human.[50] In 2020, he played Montrose Freeman on the HBO series Lovecraft Country.[51]

Williams was found dead in his Williamsburg, Brooklyn penthouse by his nephew on September 6, 2021.[52][53][54][17] The death is being investigated as a possible drug overdose.[55] His private funeral was held at St. Stephen's Episcopal Cathedral in Harrisburg, Pennsylvania where his mother lives.[56]