He has promoted pseudoscience and alternative medicine,[7][8] and has been criticized by physicians, government officials, and publications, including in the British Medical Journal, Popular Science, and The New Yorker, for endorsing unproven products and non-scientific advice. The British Medical Journal published a study in 2014 that found more than half of the recommendations on medical talk series including The Dr. Oz Show either had no evidence or contradicted medical research.[9] In 2018, Donald Trump appointed him to the President's Council on Sports, Fitness, and Nutrition.[10][11]

On November 30, 2021, Oz declared that he would run in the 2022 U.S. Senate election in Pennsylvania as a Republican to succeed incumbent Republican U.S. Senator Pat Toomey, who is retiring.[12]

Oz was born in 1960 in Cleveland, Ohio, to Suna[13] and Mustafa Öz, who had emigrated from Konya Province, Turkey.[14][13] Mustafa was born in Bozkır, a small town in southern Turkey, and graduated at the top of his class at Cerrahpaşa Medical School in 1950 and moved to the United States to join the general residency program at Case Western Reserve University in Cleveland, where Mehmet was born.[15] He trained in cardiothoracic surgery at Emory University in Atlanta and was chief of thoracic surgery at the Medical Center of Delaware for several years before moving back to Turkey.[15] Suna (née Atabay), who comes from a wealthy Istanbul family, is the daughter of a pharmacist with Circassian (Shapsug) descent on her mother's side.[16] Öz has two sisters, Seval Öz and Nazlim Öz.[17] Oz grew up in a mixed Muslim environment where his father's family practiced more traditional Islam, while his mother's family were more secular Muslims.[18] As a child, he spent summers in Turkey[19] and spent 2 years in the Turkish army after college.[20]

Oz was educated at Tower Hill School in Wilmington, Delaware.[21] In 1982, he received his undergraduate degree in biology at Harvard University.[22] He played safety on Harvard's football team and won an intramural college championship playing water polo.[23][dead link] In 1986, he obtained MD and MBA degrees from the University of Pennsylvania School of Medicine[21] and Penn's Wharton School, respectively.[24] He was awarded the Captain's Athletic Award for leadership in college[25] and was class president and then student body president during medical school.[26] 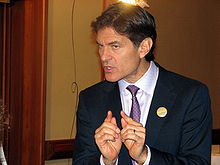 Mehmet Oz at ServiceNation in 2008

Oz sought to follow his father and become a surgeon.[27] He excelled during his residency at Columbia University, receiving the Blakemore Research Award four times.[19] Oz helped develop numerous devices and procedures related to heart surgery, including the MitraClip and the left ventricular assist device (LVAD), and by 2015 held a number of patents related to heart surgery.[28][29][19]

Oz appeared as a health expert on The Oprah Winfrey Show for five seasons.[34] In 2009, Winfrey offered to produce a syndicated series hosted by him through her company, Harpo Productions.[35] The Dr. Oz Show debuted on September 14, 2009, distributed by Sony Pictures Television.

On the show, Oz addressed issues like Type 2 diabetes[36] and promoted resveratrol supplements, which he claimed were anti-aging.[37] His Transplant! television series won both a Freddie[38] and a Silver Telly award.[39] He served as medical director for Denzel Washington's John Q.[40]

In January 2011, Oz premiered as part of a weekly show on OWN called "Oprah's Allstars". In each episode, he, Suze Orman, and Dr. Phil answer various questions about life, health and finance. He also currently[when?] does a health segment on 1010 WINS titled "Your Daily Dose".[41]

Beginning on March 22, 2021, Oz guest-hosted the trivia television game show Jeopardy! for two weeks. The decision to make him host was met with some criticism from Jeopardy fans and former contestants.[43][44][45]

Eight of Oz's books have been New York Times bestsellers, of which seven were co-authored by Michael F. Roizen. He has a regular column in Esquire magazine and O, The Oprah Magazine and his article "Retool, Reboot, and Rebuild" was awarded the 2009 National Magazine Award for Personal Service.[46] Oz and the Hearst Corporation launched the bi-monthly magazine Dr. Oz THE GOOD LIFE on February 4, 2014.[47]

Play media
Oz was heavily criticized by Senator Claire McCaskill in a hearing on consumer fraud in diet product advertising.

Oz's image and quotes have been exploited by many weight loss product scammers. While he himself has not been found to be involved in these scams, he has made statements that were exploited by scammers.[48][49] During a 2014 Senate hearing on consumer protection, Senator Claire McCaskill stated that "the scientific community is almost monolithic against you" for airing segments on weight loss products that are later cited in advertisements, concluding that Oz plays a role, intentional or not, in perpetuating these scams, and that she is "concerned that you are melding medical advice, news, and entertainment in a way that harms consumers."[50][51] He has been a spokesman and advisor for the website RealAge.com, which The New York Times has criticized for its pharmaceutical marketing practices.[49]

In September 2016, during his presidential campaign, Donald Trump appeared on The Dr. Oz Show.[52] In the lead-up to the show's taping, Oz promoted Trump's appearance with a claim that Oz would assess medical records submitted to the show by Trump and reveal his assessment on the show.[53] CNN speculated that Trump's appearance aimed to appeal to The Dr. Oz Show's large female viewership.[54][55] In 2018, Trump appointed Oz, athletes, and The Incredible Hulk star Lou Ferrigno to his Council on Sports, Fitness, and Nutrition. Trump's selections were criticized[by whom?] as choosing "pundits over experts" for the panel.[10] Trump appointed Oz to a second term on the council in December 2020.[56][57]

During the COVID-19 pandemic, a number of media publications reported that Oz's discussion of the 2019 coronavirus strain on television was influencing Trump's decision-making after appearing on The Dr. Oz Show and promoting Oz to an advisory role.[58][59][60][61] Oz had promoted the use of hydroxychloroquine, an antimalarial drug, as a cure for COVID-19 on multiple Fox News broadcasts in March 2020.[62][63][64] Trump claimed to be taking the drug in May 2020.[65] In June 2020, the Food and Drug Administration revoked emergency use authorization of hydroxychloroquine, stating that it was "no longer reasonable to believe" that the drug was effective against COVID-19 or that its benefits outweighed "known and potential risks".[66][67][68]

In April 2020, Oz appeared on Fox News with Sean Hannity and stated that reopening schools in the United States might be worth the increased number of deaths it could cause. He received major backlash on social media for the comments and later apologized, claiming that he had seen the argument in an editorial on The Lancet.[69][70]

In November 2020, Oz was sued by his sister Nazlim Öz. Nazlim alleged that he was withholding her rental income from apartments owned by their late father Mustafa Öz. Oz stated that he was forced to hold payments from the apartments in escrow, as their mother and other relatives were suing Nazlim in Turkish probate court over the distribution of Mustafa Öz's estate.[71][72]

Oz denounced the "hypocrisy" in the Drug Enforcement Administration's classification of cannabis as a Schedule I, controlled substance on Fox & Friends.[73] He has advocated for medical marijuana as a solution for the opioid epidemic during an episode of the series featuring Montel Williams.[74]

Oz has spoken in favor of the disputed practice of intermittent fasting. He became involved in a feud with actor Mark Wahlberg over not eating breakfast and took part in a push-up challenge, which Wahlberg won.[75][76]

Oz has faced criticism due to his tendency to promote pseudoscience.[7] He has been supportive of homeopathy,[77][78] and is a proponent of alternative medicine.[51] Popular Science[79] and The New Yorker[35] have published critical articles on Oz for giving "non-scientific" advice.[35] HuffPost has accused Oz of promoting quackery.[80]

A 2014 study published in the British Medical Journal found that medical talk shows such as The Dr Oz Show and The Doctors often lack adequate information on the specific benefits or evidence of their claims. 40 episodes of each program from early 2013 were evaluated, determining that evidence supported 46 percent, contradicted 15 percent and was not found for 39 percent of the recommendations on The Dr Oz Show.[11][9]

In April 2015, a group of ten physicians called for Columbia University to part ways with Oz, who was the vice chair of the Department of Surgery. More than 1,300 doctors signed a letter sent to the university.[11][81][82]

Oz has been awarded the James Randi Educational Foundation's Pigasus Award from 2009 to 2012 for his promotion of energy therapies, support of faith healing, psychic communication with the dead and "quack medical practices, paranormal belief, and pseudoscience".[83][84][85][86]

Oz has been criticized for some of the guests he has invited onto The Dr. Oz Show, including psychics, faith healers, peddlers of unproven or disproven medical treatments, and anti-vaccination activists.[87] Oz has featured Joseph Mercola, Robert F. Kennedy Jr., and Christiane Northrup, who are noted spreaders of misinformation about vaccines.[88][89]

In 2007, Oz described himself as a "moderate Republican" and cited Arnold Schwarzenegger and Theodore Roosevelt as inspirations.[95][96] A 2007 article said Oz had been active in his local Republican Party of New Jersey for several years, and had donated to Republicans John McCain and Bill Frist.[96][95]

On November 30, 2021, Oz announced his candidacy for the Republican nomination for the United States Senate seat in Pennsylvania in 2022.[97][98]

Oz is a longtime New Jersey resident. He has been registered to vote at an address in Montgomery County, Pennsylvania, at a home owned by his mother-in-law since 2020. He holds his medical license in Pennsylvania.[99]

After Oz announced his candidacy, a number of TV stations in Philadelphia, New York City and Cleveland stated that they were to remove his show from air, compelled by the FCC’s equal-time rule that provide an equivalent air time to any opposing political candidates who request it.[100]

If elected, he would be the first Muslim to serve in the U.S. Senate. 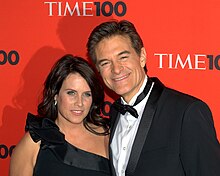 Oz lived in Cliffside Park, New Jersey, with his wife Lisa for much of his adult life.[101][102] They have been married since 1985,[103] and have four children.[104] Lisa is an author who has had appearances on radio and TV. His eldest daughter is author and television host Daphne Oz. Oz and his wife founded HealthCorps, a non-profit organization for health education and peer mentoring.[105] In late 2020, Oz changed his voter registration to the home of his in-laws in Bryn Athyn, Pennsylvania. His web site lists his home as Bryn Athyn.[106]

Oz is fluent in English and Turkish.[107] He is a holder of Turkish and American citizenship, having served in the Turkish Army to retain his Turkish citizenship.[2]

Oz is a Muslim[108][109] and says that he has been influenced by the mysticism of Sufi Muslims from central Turkey,[13] as well as the ideas of Emanuel Swedenborg, the 18th-century Swedish theologian.[110][111]

Oz is a practitioner of transcendental meditation. "When I meditate, I go to that place where truth lives," he said. "I can see what reality really is, and it is so much easier to form good relationships then."[112]

In August 2010, Oz was diagnosed with a pre-cancerous polyp in the colon during a routine colonoscopy[113] which was performed as part of his show. Oz said that the procedure likely saved his life.[114]

In 2019, Oz played for the "Home" roster during the NBA All-Star Celebrity Game at the Bojangles' Coliseum in Charlotte, North Carolina. The roster was made up of celebrities with Carolina roots.[115] He previously played in the 2010 NBA All-Star Celebrity Game.[23] Also in 2019, Oz played for Team Cleveland in Major League Baseball's All-Star Legends & Celebrity Softball Game at Progressive Field in Cleveland.[116]