Matthew Steven LeBlanc (/ləˈblɒŋk/; born July 25, 1967) is an American actor and comedian. He garnered global recognition with his portrayal of Joey Tribbiani in the NBC sitcom Friends and in its spin-off series Joey. For his work on Friends, LeBlanc received three nominations at the Primetime Emmy Awards. He has also starred as a fictionalized version of himself in Episodes (2011–2017), for which he won a Golden Globe Award and received four additional Emmy Award nominations. He co-hosted Top Gear from 2016 to 2019. From 2016 to 2020, he played patriarch Adam Burns in the CBS sitcom Man with a Plan.

LeBlanc was born in Newton, Massachusetts. His mother, Patricia (née Di Cillo), was an office manager; his father, Paul LeBlanc, was a mechanic.[1][2] His father is of Acadian descent and his mother is of Italian ancestry.[3] He attended Newton North High School, where he graduated in the same year as future comedian Louis C.K..[4] After high school he attended college at Wentworth Institute of Technology in Boston, MA. He dropped out shortly after starting his second semester.[5]

LeBlanc moved to New York at the age of 17 to pursue a career in modeling, but he was told he was too short to be in the industry. His acting career began after a woman invited him to accompany her to an audition, where he ended up getting signed by her manager.[6] He appeared in several commercials and had various roles in television before finally getting his big break with Friends. He was reportedly down to his last eleven dollars before booking the role of Joey Tribbiani.[7] 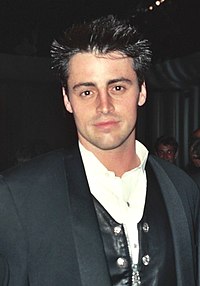 LeBlanc first appeared in a 1987 Heinz Tomato Ketchup commercial. In 1988, he starred in the television drama TV 101 for one season. In 1991, he had a recurring role on the hit Fox sitcom Married... with Children. He played Vinnie Verducci, a family friend of protagonist Al Bundy (Ed O'Neill) who briefly dates his daughter, Kelly (Christina Applegate). He also guest starred in the first season of Red Shoe Diaries. LeBlanc went on to star in two short-lived spin-offs: Top of the Heap (1991) and Vinnie & Bobby (1992).

He appeared in two Bon Jovi music videos: "Miracle", from the Young Guns II soundtrack in 1990, and "Say It Isn't So" in 2000.[8] He also appeared in videos for Alanis Morissette's single "Walk Away", Tom Petty and the Heartbreakers' "Into the Great Wide Open", and Bob Seger's "Night Moves".[9]

LeBlanc found success in the role of the dimwitted but lovable Joey Tribbiani on Friends, and went on to play this character for 12 years — 10 seasons of Friends and two seasons of Joey. Friends was wildly successful, and LeBlanc, along with his co-stars, gained wide recognition among viewers. This ensemble situation comedy became a major hit for NBC, airing on Thursday nights for ten years.[10]

Following the cancellation of Joey, LeBlanc announced that he would be taking a one-year hiatus from acting on television, which eventually turned into five years. His next role was a fictionalized version of himself on Episodes.[11] 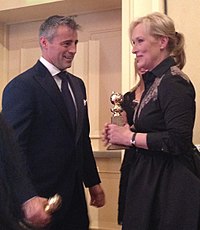 LeBlanc at the Golden Globes with Meryl Streep, 2012

In February 2012, LeBlanc appeared in the second episode of the eighteenth series of Top Gear, where he set the fastest lap time in the "Star in a Reasonably Priced Car" segment in a Kia Cee'd. Lapping at 1:42.1, he beat the show's previous recordholder Rowan Atkinson by 0.1 seconds.[9] He also appeared in the fourth episode of the nineteenth season to race the New Kia Cee'd, and beat his previous time.

In February 2016, the BBC announced LeBlanc had signed on to become one of the new Top Gear hosts,[16] signing a new two-year deal later that year.[17] He announced his decision to retire from the series in May 2018, having co-hosted it for three years. Despite the show being "great fun", he stated the "time commitment and extensive travel takes me away from my family and friends more than I'm comfortable with."[18]

LeBlanc played the lead role in the CBS sitcom Man with a Plan, which began airing in 2016 until it was cancelled in 2020.[19]

LeBlanc married Melissa McKnight, a British-born American model and a divorced single mother of two children, in May 2003.[20] In 1997, they were introduced to each other by McKnight's friend, wife of actor Lou Diamond Phillips. LeBlanc proposed to her a year later.[20] Their daughter, Marina, born in 2004, began suffering seizures at eight months old. By the time she was two years old, the condition, thought to be a form of dysplasia, had mostly subsided.[20][21] LeBlanc and McKnight divorced in October 2006, citing irreconcilable differences.[22]