Margaret Hughes (c. 1645 – 1 October 1719), also Peg Hughes or Margaret Hewes, is often credited as the first professional actress on the English stage on 8 December 1660.[1] Hughes was the mistress of the English Civil War general Prince Rupert of the Rhine.

Hughes became an actress during a period of great change in English drama which had suffered greatly during the English Civil War and the Interregnum, being banned by the Puritan Long Parliament in 1642.[2] This ban was finally lifted upon the Restoration of King Charles II. Charles was a keen theatre-goer, and promptly gave two royal patents to Sir Thomas Killigrew and Sir William Davenant.[2] During the Renaissance women had been virtually banned from appearing as actresses on the stage, resulting in male actors in female roles. One incident occurred when a play which the King was watching suddenly stopped. When he sent servants to see what the problem was, it was found that the male actor who was supposed to play one of the female parts was still shaving. There were also concerns over this practice encouraging "unnatural vice", i.e. homosexuality, which reinforced Charles in his decision in 1662 to issue a royal warrant declaring that all female roles should be played only by actresses.[3] Killigrew and Davenant were casting women almost immediately following the Restoration[3] and, once women began appearing professionally on the stage in the early 1660s, they won quick acceptance. Killigrew staged an all-female-cast production of his own play The Parson's Wedding in 1664 and again in 1672. 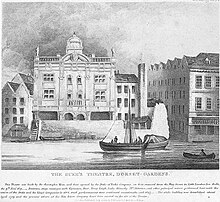 The Dorset Garden Theatre of the Duke's Company of actors, where Hughes spent a busy season in 1676.

At the age of 15, Hughes made theatre history by becoming the first woman to perform on an English stage.[4][5] Her first performance was on 8 December 1660, when she played the role of Desdemona in Shakespeare's play Othello, in a production by Thomas Killigrew's new King's Company at their Vere Street theatre.[6] Some historians identify Anne Marshall as the first actress to step onto the English stage.[7] However, there has been much analysis of the early recollections of John Downes, whose memories of the 1660s form a key part of Hughes' claim in this regard.[8]

Hughes was famous for her charms as an actress; diarist Samuel Pepys considered her "a mighty pretty woman",[9] and she was said to be "a great beauty, with dark ringletted hair, a fine figure, and particularly good legs".[10] Pepys suggested that she was a lover of Sir Charles Sedley, a noted dramatist and "famous fop", in the 1660s; she was reportedly also involved with Charles II himself, if only briefly.[9] It is believed that Hughes had an illegitimate son named Arthur, but there is no conclusive evidence of this.[10] 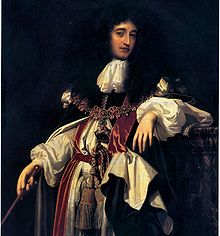 Most famously, however, Hughes became associated with Prince Rupert, Duke of Cumberland (sometimes known as "Rupert of the Rhine"), as his lover. Rupert fell in love with her in the late 1660s, although Hughes appears to have held out reciprocating his attentions with the aim of negotiating a suitable settlement.[10] Prince Rupert was one of the most senior members of the royal family at court, and Hughes rapidly received advancement through his patronage; she became a member of the King's Company by 1669, giving her status and immunity from arrest for debt, and was painted four times by Sir Peter Lely, the foremost court artist of the day.[11]

Despite being encouraged to do so,[10] Rupert did not formally marry Hughes, but acknowledged their daughter, Ruperta (later Howe), born in 1673.[12] Hughes lived an expensive lifestyle during the 1670s, enjoying gambling and jewels; Rupert gave her at least £20,000 worth of jewellery during their relationship, including several items from the Palatinate royal collection.[13] The two appear to have been close – Prince Rupert's older brother, Charles Louis, Elector Palatine, once sounded out Rupert as to his willingness to return to the Rhineland and marry appropriately, but his suggestion was rejected. Hughes continued to act even after Ruperta's birth, returning to the stage in 1676 with the prestigious Duke's Company at the Dorset Garden Theatre, near the Strand in London. The next year Rupert established Hughes in a "grand building" worth £25,000 that he bought in Hammersmith from Sir Nicholas Crispe.[12]

Prince Rupert died in 1682, leaving most of his estate, worth some £12,000, equally to Hughes and Ruperta.[14] Hughes had an "uncomfortable widowhood"[14] without Rupert's support, allegedly not helped by her continued gambling.[15] Presents from Rupert such as Elizabeth of Bohemia's earrings were sold to the Duchess of Marlborough, whilst a pearl necklace given by Rupert's father to Hughes was sold to fellow actress Nell Gwyn. Hughes sold the house in Hammersmith to two London merchants, Timothy Lannoy and George Treadwell; ultimately it was purchased by the Margrave of Brandenburg-Anspach and became known as Brandenburg (or Brandenburgh) House.[14] Her daughter, Ruperta, ultimately married Emanuel Scrope Howe, future MP and English general.[14] Hughes died in 1719.[16]

A 1672 portrait of Margaret Hughes by Sir Peter Lely.

Hughes certainly played Desdemona in the performance of Othello seen by Samuel Pepys on 6 February 1669. She also played:

Hughes left the stage for Prince Rupert in 1669 or 1670. In 1676 she emerged from retirement for one busy year with the Duke's Company. For that company, she played:

A one-act play about Margaret Hughes, entitled The First Actress, was performed in 1911, at the Kingsway Theatre in London, by a group of suffragette actresses who called themselves the Pioneer Players. Ellen Terry played Nell Gwyn in this production.

Jeffrey Hatcher wrote a play about Edward Kynaston entitled Compleat Female Stage Beauty (2000), and later adapted his play for the 2004 film Stage Beauty, directed by Richard Eyre and starring Claire Danes as Hughes. Hughes's first stage appearance is also discussed in the 2015 play Nell Gwynn, but she remains an offstage character. Hughes is the main character of Diana Norman's historical novel The Vizard Mask (1994). She is depicted as a stuttering American Puritan, Penitence Hurd, who becomes a successful Restoration actress.