Maha Shivaratri (IAST: Mahāśivarātri) is a Hindu festival celebrated annually in honour of the god Shiva. The name also refers to the night when Shiva performs the heavenly dance.[4][5] There is a Shivaratri in every luni-solar month of the Hindu calendar, on the month's 13th night/14th day, but once a year in late winter (February/March, or Phalguna as per North Indian Hindu calendar while the same day is considered to fall in Maagha Maas Krishna Paksha as per South Indian Hindu calendar) and before the arrival of Summer, marks Maha Shivaratri which means "the Great Night of Shiva".[6][7]

It is a major festival in Hinduism, and this festival is solemn and marks a remembrance of "overcoming darkness and ignorance" in life and the world. It is observed by remembering Shiva and chanting prayers, fasting, and meditating on ethics and virtues such as honesty, non-injury to others, charity, forgiveness, and the discovery of Shiva.[7] The ardent devotees keep awake all night. Others visit one of the Shiva temples or go on pilgrimage to Jyotirlingams. The festival originated in circa the 5th century CE.[7] According to the South Indian calendar, Maha Shivaratri is observed on Chaturdashi Tithi during Krishna Paksha in the month of Magha, and in other parts of India, on 13/14 night of Krishna Paksha in Phalguna of Hindu calendar, the Gregorian date however remaining the same.[8]

In Kashmir Shaivism, the festival is called Har-ratri or phonetically simpler Haerath or Herath by Shiva devotees of the Kashmir region.[9][10]

A festival of contemplation

During the Vigil Night of Shiva, Mahashivaratri,
we are brought to the moment of interval
between destruction and regeneration;
it symbolizes the night
when we must contemplate on that which
watches the growth out of the decay.
During Mahashivaratri we have to be alone
with our sword, the Shiva out of us.
We have to look behind and before,
to see what evil needs eradicating from our heart,
what growth of virtue we need to encourage.
Shiva is not only outside of us but within us.
To unite ourselves with the One Self
is to recognize the Shiva in us.

The celebration includes maintaining a "jaagaran", an all-night vigil and prayers, because Shaiva Hindus mark this night as "overcoming darkness and ignorance" in one's life and the world through Shiva. Offerings of fruits, leaves, sweets and milk to Shiva are made, some perform all-day fasting with vedic or tantric worship of Shiva, and some perform meditative Yoga.[12] In Shiva temples, "Om Namah Shivaya", the sacred mantra of Shiva, is chanted through the day.[13] Devotees praise Shiva through the recitation of Shiv Chalisa.[14]

Maha Shivaratri is celebrated over three or ten days based on the Hindu luni-solar calendar.[6] Every lunar month, there is a Shivaratri (12 per year). The main festival is called Maha Shivaratri, or great Shivaratri, which is held on 13th night (waning moon) and 14th day of the month Phalguna. In the Gregorian calendar, the day falls in either February or March.[6]

Many legends explain the significance of Maha Shivaratri, one being it is the night of Shiva's dance.

The Maha Shivaratri is mentioned in several Puranas, particularly the Skanda Purana, Linga Purana and Padma Purana. These medieval era Shaiva texts present different versions associated with this festival, & mention fasting, reverence for icons of Shiva such as the Lingam.[7]

Different legends describe the significance of Maha Shivaratri. According to one legend in the Shaivism tradition, this is the night when Shiva performs the heavenly dance of creation, preservation and destruction.[4][5] The chanting of hymns, the reading of Shiva scriptures and the chorus of devotees joins this cosmic dance and remembers Shiva's presence everywhere. According to another legend, this is the night when Shiva and Parvati got married.[4][15] A different legend states that the offering to Shiva icons such as the linga is an annual occasion to get over past sins if any, to restart on a virtuous path and thereby reach Mount Kailasha and liberation.[4]

The significance of dance tradition to this festival has historical roots. The Maha Shivaratri has served as a historic confluence of artists for annual dance festivals at major Hindu temples such as at Konark, Khajuraho, Pattadakal, Modhera and Chidambaram.[16] This event is called Natyanjali, literally "worship through dance", at the Chidambaram temple which is famous for its sculpture depicting all dance mudras in the ancient Hindu text of performance arts called Natya Shastra.[17][18] Similarly, at Khajuraho Shiva temples, a major fair and dance festival on Maha Shivaratri, involving Shaiva pilgrims camped over miles around the temple complex, was documented by Alexander Cunningham in 1864.[19] 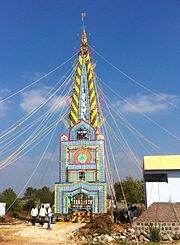 Mahasivaratri is observed at night, usually in lighted temples or specially prepared prabha (above).

Maha Shivaratri is celebrated in Tamil Nadu with great pomp and fanfare in the Annamalaiyar temple located in Tiruvannamalai district. The special process of worship on this day is 'Girivalam'/Giri Pradakshina, a 14-kilometer bare foot walk around Lord Shiva's temple on top of the hill. A huge lamp of oil and camphor is lit on the hilltop at sunset - not to be confused with Karthigai Deepam.[citation needed]

The major Jyotirlinga Shiva temples of India, such as in Varanasi and Somanatha, are particularly frequented on Maha Shivaratri. They serve also as sites for fairs and special events.[20][21]

The Mandi fair is in the town of Mandi is particularly famous as a venue for Maha Shivaratri celebrations. It transforms the town as devotees pour in. It is believed that all gods and goddesses of the area, said to number more than 200, assemble here on the day of Maha Shivaratri. Mandi, located on the banks of Beas, is popularly known as the "Cathedral of Temples" and one of the oldest towns of Himachal Pradesh, with about 81 temples of different Gods and Goddesses on its periphery.[22][23][24]

In Kashmir Shaivism, Maha Shivaratri is celebrated by the Hindus of Kashmir and is called, "Herath" in Kashmiri, a word derived from the Sanskrit word "Hararatri" the "Night of Hara" (another name of Shiva). Shivaratri, regarded as the most important festival of the community, for instance, is celebrated by them on trayodashi or the thirteenth of the dark half of the month of Phalguna (February–March) and not on chaturdashi or the fourteenth as in the rest of the country. The reason for it is that this long drawn festival that is celebrated for one full fortnight as an elaborate ritual is associated with the appearance of Bhairava (Shiva) as a jwala-linga or a linga of flame. It has been described as Bhairavotsava in Tantric texts as on this occasion Bhairava and Bhairavi, His Shakti or cosmic energy, are propitiated through Tantric worship.[citation needed]

According to the legend associated with the origin of the worship, the linga appeared at pradoshakala or the dusk of early night as a blazing column of fire and dazzled Vatuka Bhairava and Rama (or Ramana) Bhairava, Mahadevi's mind-born sons, who approached it to discover its beginning or end but miserably failed. Exasperated and terrified they began to sing its praises and went to Mahadevi, who herself merged with the awe-inspiring jwala-linga. The Goddess blessed both Vatuka and Ramana that they would be worshipped by human beings and would receive their share of sacrificial offerings on that day and those who would worship them would have all their wishes fulfilled. As Vatuka Bhairava emerged from a pitcher full of water after Mahadevi cast a glance into it, fully armed with all his weapons (and so did Rama), he is represented by a pitcher full of water in which walnuts are kept for soaking and worshipped along with Shiva, Parvati, Kumara, Ganesha, their ganas or attendant deities, yoginis and kshetrapalas (guardians of the quarters) – all represented by clay images. The soaked walnuts are later distributed as naivedya. The ceremony is called 'vatuk barun' in Kashmiri, which means filling the pitcher of water representing the Vatuka Bhairava with walnuts and worshipping it.[citation needed]

Central India has a large number of Shaiva followers. The Mahakaleshwar Temple, Ujjain is one of the most venerated shrines consecrated to Shiva, where a large congregation of devotees gathers to offer prayers on the day of Maha Shivaratri. Tilwara Ghat in the city of Jabalpur and the Math Temple in the village of Jeonara, Seoni are two other places where the festival is celebrated with much religious fervour.[citation needed]

In Punjab, Shobha Yatras would be organised by various Hindu organisations in different cities. It is a grand festival for Punjabi Hindus.[citation needed]

In Gujarat, Maha Shivaratri mela is held at Bhavnath near Junagadh where bathing in the Mrugi (Mrigi) kund is considered holy. According to myth, Lord Shiva himself comes to bath in the Mrugi kund.[citation needed]

In Odisha, Maha Shivaratri is also known as Jagara. People fast for their wishes whole day and take food after 'Mahadipa' (The great diya) rises at the top of Shiva temple. It usually is held during midnight. Unmarried girls also worship for seeking a suitable husband.[citation needed]

There are several stories and beliefs associated with this auspicious event.

It is believed that on this particular day Lord Shiva gulped the Halahala produced during Samudra manthan and beheld it in his neck which bruised and turned blue, after which he was named as Neel Kanth. It is also believed that the famous Neelkanth Mahadev Temple is the place where this incident took place.[citation needed]

Maha Shivaratri is a national Holiday in Nepal and celebrated widely in temples all over the country, especially in the Pashupatinath temple. Thousands of devotees visit the famous Shiva Shakti Peetham nearby as well. Holy rituals are performed all over the nation. Maha Shivaratri is celebrated as Nepali Army Day amid a spectacular ceremony held at the Army Pavilion, Tundikhel.[25] Artists from various classical music and dance forms perform through the night. On Maha Shivaratri, married women pray for the well being of their husbands, while unmarried women pray for a husband like Shiva, considered as the ideal husband. Shiva is also worshipped as the Adi Guru (first teacher) from whom the divine wisdom originates.[citation needed]

Umarkot Shiv Mandir in Umarkot is famous for the three day Shivarathri celebration, which is attended by around 250,000 people.[26]

Hindus in Pakistan visit Shiva temples during Shivratri. The most important is the three-day Shivratri festival in the Umarkot Shiv Mandir. It is one of the biggest religious festivals in the country. It is attended by around 250,000 people. All the expenses were borne by the Pakistan Hindu Panchayat.[26] Shivrathri Celebrations also occur in the Churrio Jabal Durga Mata Temple, which is attended by 200,000 pilgrims. Hindus cremate the dead and ashes are preserved till Shivratri for immersion into the holy water in Churrio Jabal Durga Mata Temple.[27]

Another major temple where Shivratri is celebrated is the Shree Ratneshwar Mahadev Temple in Karachi whose Shivratri festival is attended by 25,000 people.[28] On the Shivratri night, Hindus in Karachi fast and visit the temple. Later, devotees from the Chanesar Goth come to the temple carrying water from the Holy Ganges, in order to bathe the idol of Shiva. Puja is performed until 5 am, when an aarti is then done. Devotees then walk barefoot with women carrying a pooja thali containing flowers, incense sticks, rice, coconut and a diya to the sea after which they are free to break their fast. Later they eat food prepared in the temple kitchen for breakfast.[29]

Maha Shivaratri is the main Hindu festival among the Hindu diaspora from the Indian states of Uttar Pradesh and Bihar. In Indo-Caribbean communities, thousands of Hindus spend the beautiful night in over four hundred temples across the country, offering special jhalls (an offering of milk and curd, flowers, sugarcane and sweets) to Lord Shiva.[30] In Mauritius, Hindus go on pilgrimage to Ganga Talao, a crater-lake.[31]