Gertrude Pridgett began performing as a teenager and became known as "Ma" Rainey after her marriage to Will "Pa" Rainey in 1904. They toured with the Rabbit Foot Minstrels and later formed their own group, Rainey and Rainey, Assassinators of the Blues. Her first recording was made in 1923. In the following five years, she made over 100 recordings, including "Bo-Weevil Blues" (1923), "Moonshine Blues" (1923), "See See Rider Blues" (1924), "Ma Rainey's Black Bottom" (1927), and "Soon This Morning" (1927).[6]

Rainey was known for her powerful vocal abilities, energetic disposition, majestic phrasing, and a "moaning" style of singing. Her qualities are present and most evident in her early recordings "Bo-Weevil Blues" and "Moonshine Blues".

Rainey recorded with Thomas Dorsey and Louis Armstrong, and she toured and recorded with the Georgia Jazz Band. She toured until 1935, when she largely retired from performing and continued as a theater impresario in her hometown of Columbus, Georgia, until her death four years later.[1]

There is uncertainty about the birth date of Gertrude Pridgett. Some sources indicate that she was born in 1882, while most sources assert that she was born on April 26, 1886.[2] Pridgett claimed to have been born on April 26, 1886 (beginning with the 1910 census, taken April 25, 1910), in Columbus, Georgia.[7] However, the 1900 census indicates that she was born in September 1882 in Alabama, and researchers Bob Eagle and Eric LeBlanc suggest that her birthplace was in Russell County, Alabama.[8][9] She was the second of five children of Thomas and Ella (née Allen) Pridgett, from Alabama. She had at least two brothers and a sister, Malissa Pridgett Nix.[7]

Pridgett began her career as a performer at a talent show in Columbus, Georgia, when she was approximately 12 to 14 years old.[1][12] A member of the First African Baptist Church, she began performing in black minstrel shows. She later claimed that she was first exposed to blues music around 1902.[13] She formed the Alabama Fun Makers Company with her husband, Will Rainey, but in 1906 they both joined Pat Chappelle's much larger and more popular Rabbit's Foot Company, where they were billed together as "Black Face Song and Dance Comedians, Jubilee Singers [and] Cake Walkers".[14] In 1910, she was described as "Mrs. Gertrude Rainey, our coon shouter".[14] She continued with the Rabbit's Foot Company after it was taken over by a new owner, F. S. Wolcott, in 1912.[1] Rainey said she found "Blues Music" when she was in Missouri one night performing, and a girl introduced her to a sad song about a man leaving a woman. Rainey said she learned the lyrics of the song and added it to her performances. Rainey claimed she created the term "blues" when asked what kind of song she was singing.[10]

Beginning in 1914, the Raineys were billed as Rainey and Rainey, Assassinators of the Blues. Wintering in New Orleans, she met numerous musicians, including Joe "King" Oliver, Louis Armstrong, Sidney Bechet and Pops Foster. As the popularity of blues music increased, she became well known.[15] Around this time, she met Bessie Smith, a young blues singer who was also making a name for herself.[A] A story later developed that Rainey kidnapped Smith, forced her to join the Rabbit's Foot Minstrels, and taught her to sing the blues; the story was disputed by Smith's sister-in-law Maud Smith.[16] 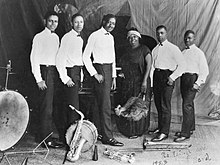 Rainey and the band

From the late 1910s, there was an increasing demand for recordings by black musicians.[17] In 1920, Mamie Smith was the first black woman to be recorded.[18] In 1923, Rainey was discovered by Paramount Records producer J. Mayo Williams. She signed a recording contract with Paramount, and in December she made her first eight recordings in Chicago,[19] including "Bad Luck Blues", "Bo-Weevil Blues" and "Moonshine Blues". She made more than 100 other recordings over the next five years, which brought her fame beyond the South.[1][20] Paramount marketed her extensively, calling her the "Mother of the Blues", the "Songbird of the South", the "Gold-Neck Woman of the Blues" and the "Paramount Wildcat".[21]

In 1924, Rainey recorded with Louis Armstrong, including on "Jelly Bean Blues", "Countin' the Blues" and "See, See Rider".[22] In the same year, she embarked on a tour of the Theater Owners Booking Association (TOBA) in the South and Midwest of the United States, singing for black and white audiences.[23] She was accompanied by the bandleader and pianist Thomas Dorsey and the band he assembled, the Wildcats Jazz Band.[24] They began their tour with an appearance in Chicago in April 1924 and continued, on and off, until 1928.[25] Dorsey left the group in 1926 because of ill health and was replaced as pianist by Lillian Hardaway Henderson, the wife of Rainey's cornetist Fuller Henderson, who became the band's leader.[26]

Although most of Rainey's songs that mention sexuality refer to love affairs with men, some of her lyrics contain references to lesbianism or bisexuality,[27] such as the 1928 song "Prove It on Me":

They said I do it, ain't nobody caught me.
Sure got to prove it on me.
Went out last night with a crowd of my friends.
They must've been women, 'cause I don't like no men.
It’s true I wear a collar and tie.
Makes the wind blow all the while.[28]

According to the website queerculturalcenter.org, the lyrics refer to an incident in 1925 in which Rainey was "arrested for taking part in an orgy at [her] home involving women in her chorus".[29] The political activist and scholar Angela Y. Davis noted that "'Prove It on Me' is a cultural precursor to the lesbian cultural movement of the 1970s, which began to crystallize around the performance and recording of lesbian-affirming songs."[30] At the time, an ad for the song embraced the genderbending outlined in the lyrics and featured Rainey in a three-piece suit, mingling with women while a police officer lurks nearby.[31]

Unlike many blues singers of her day, Rainey wrote at least a third of the songs she sang including many of her most famous works such as "Moonshine Blues" and "Ma Rainey's Black Bottom" which would become standards of the "classic blues" genre.[31]

Throughout the 1920s, Ma Rainey had a reputation for being one of the most dynamic performers in the United States due in large part to her songwriting, showmanship and voice.[31] She and her band could fetch earnings of $350 a week on tour with the Theater Owners’ Booking Association which was double that of Bessie Brown and George Williams while a little over half what Bessie Smith would ultimately command.[32]

Toward the end of the 1920s, live vaudeville went into decline, being replaced by radio and recordings.[26] Rainey's career was not immediately affected; she continued recording for Paramount and earned enough money from touring to buy a bus with her name on it.[33] In 1928, she worked with Dorsey again and recorded 20 songs, before Paramount terminated her contract.[34] Her style of blues was no longer considered fashionable by the label.[35] It is unclear if she maintained the royalties to her songs after she was fired from Paramount.[31]

Ma Rainey and Pa Rainey adopted a son named Danny who later joined his parents' musical act. Rainey developed a relationship with Bessie Smith. They became so close that rumors circulated that their relationship was possibly also romantic in nature.[10] It was also rumored that Smith once bailed Ma Rainey out of jail.[29]

Ma Rainey created what is now known as "classic blues" while also portraying black life like never before. As a musical innovator she built on the minstrelsy and vaudeville performative traditions with comedic timing and a hybrid of American blues traditions she encountered in her vast tours across the country. She helped to pioneer a genre that appealed to North and South, rural and urban audiences.[31]

Her signature low and gravelly voice sung with Rainey's gusto and authoritative style inspired imitators from Louis Armstrong, Janis Joplin and Bonnie Raitt among others.[31]

In her lyrics, Rainey portrayed the black female experience like few others of the time reflecting a wide range of emotions and experiences. In her 1999 book Blues Legacies and Black Feminism, Angela Davis wrote that Rainey's songs are full of women who “explicitly celebrate their right to conduct themselves as expansively and even as undesirably as men".[41] In her songs, she and other black women sleep around for revenge, drink and party all night and generally live lives that "transgressed these ideas of white middle class female respectability".[42] The portrayals of black female sexuality, including those bucking heteronormative standards, fought ideas of what a woman should be and inspired Alice Walker in developing her characters for The Color Purple.[43] Bragging about sexual escapades was popular in men's songs at the time but her use of these themes in her works established her as both fiercely independent and fearless and many have drawn connections between her use of these themes and their modern use in Hip-Hop.[44]

There was also a small museum opened in Columbus in 2007 to honor Ma Rainey's legacy. It is in the very house that she had built for her mother and later lived in from 1935 until her death in 1939.[47]

The first annual Ma Rainey International Blues Festival was held in April 2016 in Columbus, Georgia, near the home that Rainey owned and lived in at the time of her death.[48][49] In 2017, the Rainey-McCullers School of the Arts opened in Columbus, Georgia, named in honor of Rainey and author Carson McCullers.[50]

Sterling A. Brown wrote the poem "Ma Rainey" in 1932, about how "When Ma Rainey / comes to town" people everywhere would hear her sing. In 1981, Sandra Lieb wrote the first full-length book about Rainey, Mother of the Blues: A Study of Ma Rainey.[51]

Ma Rainey's Black Bottom, a 1982 play by August Wilson, is a fictionalized account of a recording of her song of the same title set in 1927. Theresa Merritt and Whoopi Goldberg starred as Rainey in the Original and Revival Broadway productions, respectively. Viola Davis portrayed Rainey in the 2020 film adaptation of the play and was nominated for the Academy Award for Best Actress.[52]

Mo'Nique played Rainey in the 2015 television film Bessie about the life of Bessie Smith, for which she earned a nomination for Primetime Emmy Award for Outstanding Supporting Actress in a Limited Series or Movie.[53]

This sortable table presents all 94 titles recorded by Rainey.[54]